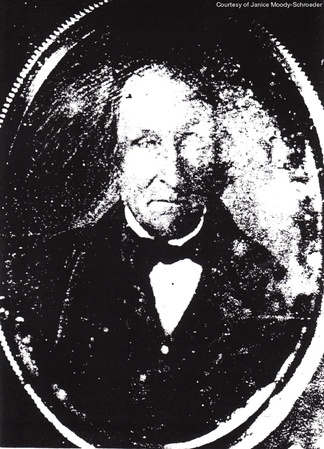 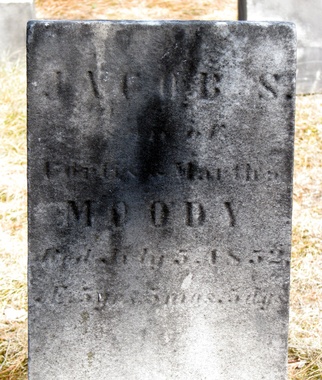 Jacob Smith Moody (1787 - 1863), farmer, trapper and guide, is thought to be the first Euro-American settler in Saranac Lake proper, although the Native American presence throughout the Adirondacks dates back thousands of years, including a settlement at Coreys, between Upper Saranac lake and Stony Creek Ponds, eleven miles to the southwest.

In 1819, he acquired 160 acres, Lot 12, Township 11 of the Old Military Tract, which included some of Moody Pond and some shoreline on the Saranac River in the region that would become Lake Flower; he built a log cabin at the foot of the pine-covered esker near the intersection of present-day Pine Street, then known as Northwest Bay Road, and Brandy Brook Avenue (formerly River Street).

He had seven children and 21 grandchildren. His son Cortis Moody (sometimes given as Cortez) was the first child of European descent born in the area. Five of his sons, Harvey, Smith, Cortis, Daniel and Martin gained fame as guides.

On November 7, 1836, Jacob Moody deeded the northernmost fifty acres of his 160 to his son Harvey Moody, who built a half log/half clapboard cabin and a small log smithy on the property.

Jacob's remaining 110 acres, that contained a small part of Lake Flower, was lost through indebtedness to the heirs of Newell Reynolds in 1841; it sold at auction to Phineas Norton for $71.38; in 1843 Norton sold the land for $110 to Jacob's son Smith Moody who had a log cabin somewhere it.

Jacob Smith Moody died in 1863 and is buried in Pine Ridge Cemetery next to the grave of his first wife. The Moody family burial ground became the nucleus of the village cemetery.

Jacob Smith Moody was not only the first settler in what is now one corner of the village, but he was the first settler in the region. He came to it in 1819. At that time his nearest neighbor to the north was some ten miles away. This was Isaac Livingston, who was living on the Northwest Bay Road, about five miles beyond the later Nokes settlement in West Harrietstown. Moody's nearest neighbor to the east was Moses Hazelton, about five miles away toward Lake Placid. If Jacob, therefore, was seeking isolation, he clearly found it.

He was born in Keene, N. H., in 1787, and died at Saranac Lake in 1863. He came to the mountains in consequence of an injury received in a sawmill at Keene, and which incapacitated him for further work of the sort he had hitherto done. He squatted first on what is now Highland Park, and sought to procure title to some land there. 1 Difficulties arose, however, and he moved to "the pines," near the present cemetery. Here he cleared sixteen acres of land, to which he later received a deed from the State. 2 This tract, which is in the Town of North Elba, lies east of River Street. Within it are the following well-known places: Moody Pond, the Gordon Cottage, Ben Moody's homestead, and the village cemetery.

Jacob Moody built a log cabin on the North West Bay Road, at the foot of the steep hillside of pines, where the upper road to Lake Placid crosses the railroad track. Here he lived for many years, but finally built a better home at what is now No. 154 River Street, where one of his grandsons— Benjamin R. Moody—still lives.

1. A. L. Donaldson is the source of this version. However, Mary MacKenzie wrote at length in her paper on the Moody family about the changes in Town lines which led to Donaldson's erroneous conclusion. The Moodys stayed put; the Town lines moved.
2. He actually bought a full section, 160 acres.Saranac Lake esker