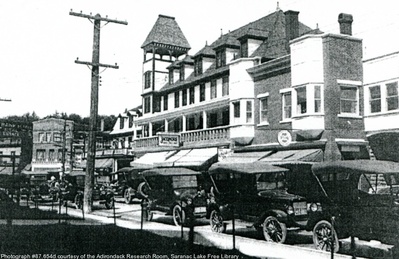 Jacqmor's sign can be seen in the center of this view of the Berkeley House looking towards T.F. Finnigan's and the Roberts Block 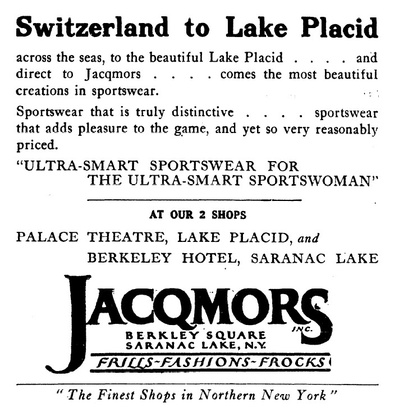 Lake Placid News, June 25, 1926 Jacqmor's was a dress shop located in a storefront in the Berkeley Hotel in the 1920s. The shop was owned by Jack Kupsick and theatrical agent and manager, William Morris. The shop sold dresses imported from Switzerland.

The opening of a branch store by Jacqmors, incorporated, of Saranac Lake in the new Palace Theatre building in Lake Placid on June first will be looked forward to with interest by many Lake Placid shoppers.

Jacqmors have everything in readiness for establishing: this, their third branch store, and are only waiting for completion of minor details of interior work in the new theatre building, before moving in new fixtures and stock and opening: their doors with the opening of the theatre.

Jacqmors business card.
Courtesy of Barbara Kupsick KlionJacqmors, Inc., styles itself "The Finest Shop in Northern New York." William Morris, president of the concern, is a prominent theatrical manager of New York City who has made Saranac Lake his residence this past few years. He is widely known as manager for the noted Scotch comedian, Sir Harry Lauder. 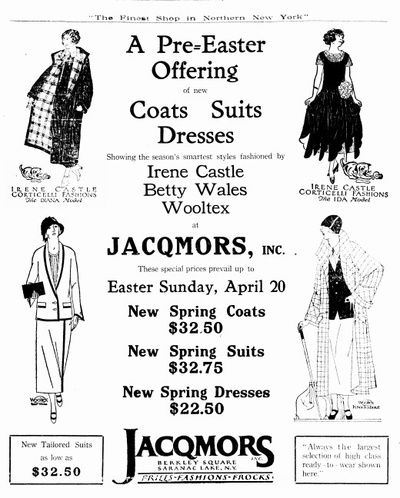 Lake Placid News, April 4, 1924
Jack Kupsick, manager of the store and an officer in the firm, is one of the prominent young business men of Saranac Lake and was associated with Mr. Morris in the establishment of the business. Previous to the founding of Jacqmors, Mr. Kupsick had for several years conducted a business of his own in Saranac Lake, dealing in women's apparel and was thus able to bring experience as well as ability to the new firm.

Since the establishment of the store in Saranac Lake, Jacqmors have featured styles by Irene Castle and Billy Wales and their affiliation with Russek's fashionable and exclusive Fifth Avenue store in New York, affords them obvious buying advantages.

The Lake Placid branch, according to statements of the management, will feature exclusive sportswear at moderate prices.