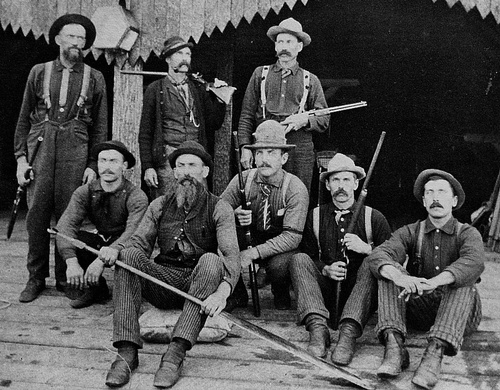 James Cross is seated at left.
From Geraldine Collins' The Brighton StoryBorn: c. 1844

James Cross was a guide and Civil War veteran.

James Cross, one of the best known guides of the Adirondacks, died last week at his home near Keese's Mill, aged 64 years. He was a veteran of the civil war, a Mason, and a man who was held in high esteem by all who knew him. A wife and two daughters survive.

From Geraldine Collins The Brighton Story

JAMES CROSS - Came from Morristown, Vermont, and went to work for Paul Smith, April 5, 1866, as a guide. Aside from guiding, he made fishing rods that he sold for prices as high as $25.00 [more than $700 in 2018 currency]. He also made boats. He seemed to have a natural talent for mechanics and one time made a telephone. Once you met him you could never forget him because he was a towering 6 ft. 3 in. in height and lean as could be. One year he and Phil King (5 ft. 6 in.) went to a convention for assemblymen. They were introduced as the "long and the short of Brighton." James was married to Albertine Hall, daughter of John Hall of Keeses Mills. He served in the Civil War and survived to tell many stories of his experiences. He died on April 18, 1908, of pneumonia and is buried in St. John's Cemetery.