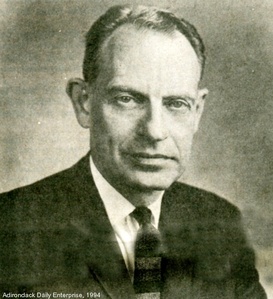 James Isaac Loeb, along with Roger Tubby, bought the Adirondack Daily Enterprise in 1953, and served as editor through 1970. Loeb had served as consultant to President Truman's counsel and directed of Averill Harriman's presidential campaign. He was appointed by John F. Kennedy as Ambassador to Peru from 1961 to 1962, and as Ambassador to Guinea from 1963-1965.  He served on the Temporary Study Commission on the Future of the Adirondacks that led to the creation of the Adirondack Park Agency.

His papers are in the Dartmouth College Library.

I had the privilege of working with the best and the brightest for 23 years at the Adirondack Daily Enterprise and my friend and colleague Jerome Ripley "Rip" Allen was at the top of the list . . . along with Evelyn Outcalt, Fran Dickie, Bill McLaughlin, Peter Cox, Harry Nason and publishers Jim Loeb and Roger Tubby [former press secretary to President Harry Truman] . . . to name a few.

This is a brief recollection from a long story about how the Allen's landed in Saranac Lake . . . Rip and his late wife Heidi, were serving with the Peace Corps in Guinea. They met Ambassador Jim Loeb when they attended a reception for the Ambassador who was leaving that post, as Rip and Heidi were also ending their service with the Peace Corps. Ambassador Loeb after inquiring about their future plans convinced them to move to Saranac Lake. Lucky for us.

HANOVER, N.H. — James Loeb, former ambassador and owner and publisher of the Enterprise died Friday at the Alice Peck Day Extended Care Facility in Lebanon, N.H., after a long illness.

He was 83. A memorial service will be held at The Rollins Chapel at Dartmouth College in Hanover at 3:30 p.m. Jan. 24.

He is survived by his second wife Anna, whom he married in the early 1970s; a son Peter, of Boston; a daughter Susan Luppino, of Florence, Italy; a sister Virginia VanStratton of Chicago; and four granddaughters.

Loeb was born in Highland Park, Ill., on Aug. 8, 1908, the son of James and Viola (Klein) Loeb. He graduated from Dartmouth in 1929. He received his master's degree from Northwestern University in 1931 and his doctorate in 1936 from Northwestern in Romance languages. He taught languages there until 1940 when he and Dr. Reinhold Neibuhr, head of Union Theological Seminary in New York City, founded the Union for Democratic Action, a predecessor of the Americans for Democratic Action organization. Loeb served as national secretary of the ADA until 1952, when he went to Washington as an aide to Charles Murphy, counsel to then President Truman.

In 1953, Loeb and Roger Tubby, who was assistant press secretary and later press secretary for President Truman, bought the Enterprise. In 1958, Loeb served briefly as secretary to New York Governor Averell Harriman.

"He really did treat his employees (at the paper) as a family said Howard Riley, press spokesman at the Adirondack North Country Association. Riley was once a reporter and editor for the paper.

Riley remembered Loeb as an intelligent man who had an "incredible grasp of world affairs."

If Loeb was planning to be away from the newspaper, he would "in one afternoon sit down and flawlessly type five editorials with no typos to run each day that he would be gone," Riley said. "If there was something that might change, he would provide different paragraphs that could be inserted to keep the editorial current."

In April 1961, Loeb was appointed by President John F. Kennedy as ambassador to Peru. He remained at that post until November of 1962 when he resigned after the military overthrew the elected officials in that country in a bloodless coup.

In 1963, he was appointed again by Kennedy, as ambassador to Guinea, located on the west coast of Africa.

Of the appointment to Peru, Loeb wrote on April 1, 1961: "The telephone call came some weeks ago, on February 20, to be precise. It was almost totally unexpected. Not completely because some weeks previously there had been some conversations about a similar appointment. But these suggestions had long since been filed and forgotten.

"When Undersecretary of State Chester Bowles called to say that President Kennedy wanted me to become Ambassador to Peru, I could hardly say no. How could anyone in such a circumstance? I couldn't. I said yes.

"I have accepted the appointment because I consider it the greatest challenge that I have ever been asked to face, and the greatest opportunity to be of service to my country. The task of representing the United States in the third largest country of South America comes at a time when the entire hemisphere is torn with conflicting tendencies and when our government is launched on a massive new program to build democratic strength in all the Americas."

A 1961 article in the New York Post described the soon to be 57-year-old ambassador as a "tall, free-gaited, Lincolnesque man with an easy-going exterior and a churning, socially conscious interior. He has been aptly described as a lean, youthful former teacher of romance languages who has never permitted his ulcers to weaken his intestinal fortitude."

Loeb also served on the first Board of Trustees of North Country Community College, being appointed to the position by the Franklin County Legislature in 1966. He served as a trustee until 1975. He was adamant that the community take a leading role in shaping the college.

"Our challenge and our opportunity, as a community, lie not in making the decision but in offering the decision-makers the kind of support without which any college will be seriously handicapped," Loeb wrote in an editorial shortly after the state Board of Regents approved the establishment of the college in 1966.

Funeral arrangements are with the Knight Funeral Home of White River Junction, Vt.