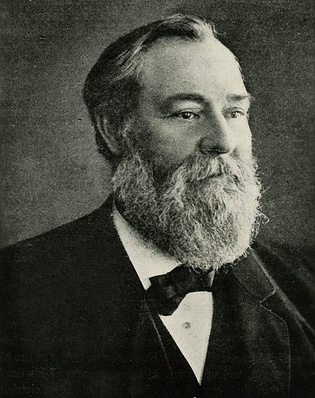 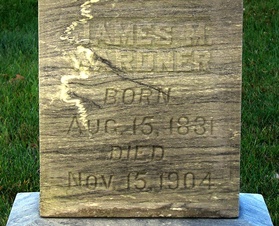 James Manchester Wardner grew up on a farm in Keeseville, New York. At 18 he was hired as a hunter for a wagon train heading for the 1849 California Gold Rush, but he dropped out of the poorly run outfit in Toledo, Ohio, where he stayed five years working on, and eventually buying, a wool carding mill. He returned home after being diagnosed with tuberculosis, which he hoped to cure by going into the Adirondacks, where he hoped to earn a living as a market hunter, trapper and farmer. 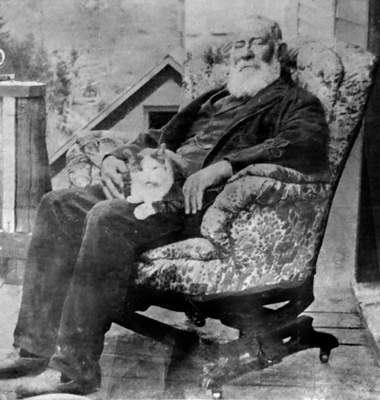 James M. Wardner
from an unidentified news clipping c. 1900
from "Scrapbook No. 1" Saranac Lake Free LibraryHe recovered from TB, married Delia Marshall, cleared a farm and built a house that later became the popular Rainbow Inn. After one son was born, Delia died, and Wardner married Addie Macomber with whom he had three more children.

Mr. Wardner is a noble specimen of a backwoodsman. Possessed of a fine intellect, fair education, high moral character, backed up by a fine physical structure, and weighing about two hundred pounds, we think we are amply justified in speaking of him in these eulogistic terms. With his brother Seth, he settled here more than thirty years ago, when it was an unbroken wilderness. He has followed trapping, hunting and school teaching the better part of his life. He has killed fourteen bears and probably a thousand deer, and as the country became settled, "taught the young ideas how to shoot!" Mr. Wardner talks some of starting a sort of summer school of natural history for boys, and we urged him to go ahead and try the experiment at least. It strikes us there are many gentlemen in Plattsburgh as well as elsewhere, who would be delighted to avail themselves of an opportunity of sending their sons off into the woods to spend their vacations under so gentlemanly and honorable a tutor and guide, who would make their visit a constant series of object lessons, while he introduced them into the mysteries of fishing, hunting, the camp, and the life of the backwoodsman! It is good fishing at Rainbow Lake, a handsome body of water, and this has always been a great hunting center. Mr. W. has a large pack of hounds anxiously awaiting the 15th of August. His house is new and commodious.

There were two special reasons for our making a visit to Wardner's. First, to see their collection of stuffed

Mrs. Wardner, whom many will remember as Miss Addie S. Macomber, of Clintonville, daughter of Albert Macomber, is the taxidermist of this region. Sportsmen from all directions come here to have animals and birds staffed which they would like to preserve as souvenirs of the wilderness. One year she stuffed fourteen deer heads for parties from the cities. Purchases are constantly being made from her own collection of animals and birds, but her display is still very interesting, ornamenting all the sides of one large room, and including a large bear recently killed by Mr. Wardner, a fine lynx, deer heads, fine specimens of sable, mink, loons, owls, and smaller animals and birds. At the time their house was burned several years ago they lost a valuable collection, The second attraction was their

Frequent reference has been made to interesting discoveries of ancient pottery made in this neighborhood by Mr. Wardner, which, owing to the increased interest in this subject, awakened by the recent discoveries by Dr. Kellogg, of Plattsburgh, can hardly fail to interest our readers. Mr. Wardner's most interesting discovery was about twenty years ago, near Jones Pond, and consisting of an earthen vessel holding about three gallons and nearly perfect. This is now on exhibition, at the Hall of Military Record, in Albany. The manner of its discovery was singular. He was following a deer over a fallow, from which, the fire had burned nearly all of the vegetable mould or peat, the collection of many years and, perhaps centuries, as not infrequently occurs. Curiosity led him to stop and examine a hole made by one of the deer's feet, which revealed this earthen vessel, half burled in the sand, and into which the deer had stepped. Subsequently, Mr. Wardner found two other similar vessels, which were destroyed at the time his former house was burned. He has now a quantity of fragments of pottery found on an island in Rainbow Lake, which bear a strong resemblance to the specimens discovered by Dr. Kellogg. Mr. Wardner believes this pottery to be the work of a pre-historic race.

As a young man in the early 1850s, James M. Wardner had hoped to go West to make his fortune. After he had been working in Toledo, Ohio, he returned to his parental home near Keeseville. He was engaged to marry Delia Marshall, but had to explain to his family and fiancée that he had been diagnosed with consumption (TB) and might not live more than 2 or 3 months. The Toledo doctor had told him his only chance would be to go up into the mountains to live.

“Mother slipped her arm around me, the tears were running down her dear old face. The rest of our family expressed deep sympathy. The situation was getting to the point beyond the limit of my self control when Lavona (his sister) broke the spell:

‘Nonsense, James, I don’t believe you are as sick as all that …you will soon be all right when you go up in the mountains on another hunting expedition.’

‘That is exactly what I want to do,’ I told them,‘…I intend to stay up there summer and winter for 2 or 3 years at least…if I see that I am going to get over this lung trouble, I will come back and get Delia…’

‘How do you expect to earn a living up in the woods?’ Mother wanted to know.

‘Hunting and trapping mostly,’ I told her ‘…I also want to have a farm up there somewhere,’ I was filled with strong determination, not alone to regain my health, but also to make a comfortable and prosperous home somewhere in the Adirondacks. I loved farming almost as well as I did hunting, trapping and fishing. If I could make these pleasures earn a good living for me, then I would indeed be happy. I also felt sure the mountain air would fully restore my health. It was worth trying at any rate.”

Before leaving, James went to buy a canoe from the Abnenaki Indian, Perejeune, father of his friend Mitchell Sabattis. He was given a canoe as well as medicine for his cough, made of balsam, spruce and pitch pine. He reported “the cough remedy helped me greatly.”

So James, with his brother Seth and friend Lorenzo Rand, camped all winter in a log cabin on Osgood Pond. They did well with hunting and trapping and James earned enough to buy land in 1855, for a farm on his chosen site at Rainbow Lake. He recovered from TB to marry Delia, clear a farm and build a house that he later enlarged to become the Rainbow Inn, a successful resort. After one son had been born, Delia died. Later James married Addie Macomber and they had three more children. James Wardner lived a long and productive life, becoming a school superintendent and Town of Brighton Supervisor. He lived to age 73 (1831-1904). His descendants still return to Rainbow Lake each summer at this son Charles Wardner’s camp, and his great granddaughter Joan Wardner Allen now lives year round at the Rainbow Camp.

There died at Rainbow on Tuesday of last week a man who in his earlier years was prominent in the affairs of our county, who enjoyed the respect of all who knew him and whose kindly and generous disposition won the warm regard of all with whom he came in contact. That man was James M. Wardner. Mr. Wardner established himself in the hotel business at Rainbow Lake many years ago and by degrees, from the lodge in the wilderness built up the extensive Rainbow Inn establishment, which has harbored many guests both summer and winter, and where at one time many an invalid seeking the health-giving ozone of the Adirondacks, found a comfortable home. Mr. Wardner began modestly and gradually added to his lands and extended his hotel plant till at one time it was one of the best appointed hotels in all the Adirondacks and he was considered forehanded. Many were the improvements which he wrought at Rainbow Lake, from damming its waters so as to bring them close to his hotel, to stocking them systematically with trout, until Rainbow became one of the best fishing reports in the Adirondack mountains. In his later years misfortune overtook him and the hotel passed from his possession, but the memory of the old days in the minds of many will not quickly be obliterated.

Mr. Wardner was one of the most simple and kindly of men, a natural student who delighted in his forest surroundings, to whom every fern and leaf and bird was a friend. He knew the habits of the animal kingdom about him as few men know them and was a born naturalist. His home was a most hospitable one, many social gatherings of Brighton were held there, and everybody was his friend. Always genial and hopeful, ready to do any favor in his power to grant, his life was one of sunshine and good will. For many years he was one of the most prominent men of his town and the southern part of the county. Being a sterling Republican, he took an active interest in political affairs. This resulted in his nomination and election as school commissioner, which office he filled for six years. For about a decade he had been afflicted with rheumatism and other ailments and had retired largely from active pursuits. He was a resident of Rainbow for 56 years.

Mr. Wardner was born in Chesterfield, Essex county, and in early life went with his brother Seth to Ohio, where they engaged for a time in business. The climate not agreeing with him there, he returned East and during a hunting trip with his brother and Mr. Rand at Osgood Pond he found and selected the site upon which the Rainbow Inn now stands for a farm and hunting and fishing resort. The next year he bought 50 acres of land at the head of Rainbow Lake and built upon it a log shanty very near where the present hotel stands.  From this humble beginning the Rainbow Inn farm and summer resort developed.  Mr. Wardner managed to get out to vote election day, and, with the assistance of the inspectors, to deposit his ballot for president, but it was with the greatest difficulty that be was able to gratify his wish to once more vote. He had not missed voting at any election since he attained the age of 21 years.

Mr. Wardner leaves surviving, besides his widow, four children: Mrs. Lulu Toof, Charles H., of Brushton, and James, who is in the U. S. army at Ft. Riley, Kansas.

The funeral was held at Rainbow Thursday. Mr. Wardner was in his 74th year.