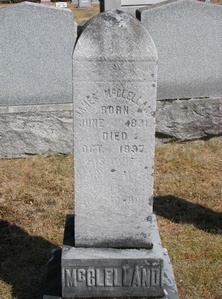 James McClelland worked as a guide for Paul Smith and settled in Saranac Lake about 1851; he owned the land that is now known as French Hill. James Street and McClelland Street are named for him. Along with Mart Moody, he guided the party of Lady Amelia Murray, the first woman to cross the Adirondacks, in 1854 or 1855. She called him Jamie M'Cleland, and wrote that he "had enough Scotch recollections to induce him to look with a pleased expression at one of my name."

The death of James McClelland, which occurred on the afternoon of Wednesday October 20, removed from the Adirondacks a man who had been identified with the growth and prosperity of the village of Saranac Lake during practically it’s entire existence. Born in the County Armagh, Ireland, in 1831, he removed with his parents to Canada when an infant, and, before reaching his majority, married Mary E. Wise, and settled in a small lumbering district in the heart of the then comparatively unknown Adirondack wilderness. For thirty years he followed the business of guiding during the summer and lumbering in the winter. As a guide Mr. McClelland always ranked among the honorable and trustworthy in the profession, and was employed by some of the best parties that came to the woods. The fact that he was often engaged by the same parties season after season is sufficient proof that the services he rendered gave satisfaction. As time advanced, the little lumbering district developed into the enterprising Saranac Lake village of today. Its early growth was slow, and the amusements to be enjoyed during the long winter evenings were few. Mr. McClelland was possessed of much natural ability and wit, and his fund of interesting anecdotes and experiences were ever in demand. For a considerable time he was the regular contributor to the Troy Daily Times, the Essex County Republican and other publications. He was often called upon to speak at the debating societies, to which he always belonged and which he greatly assisted in keeping alive and interesting. When the only religious services at Saranac Lake were the Union meetings held at the school house, Mr. McClelland was a regular attendant, and always contributed to the support of the preacher, not only at the Sunday collections, but at church socials and by subscriptions as well. He had a remarkably good understanding of the Bible, and for a long time was the Bible class teacher in the Sunday School. He has a kindly and sympathetic heart, was a friendly and obliging neighbor and a worthy and respected citizen. He was the father of a large family for whom he had the deepest affection and whom he educated to the best of his ability. During the school session his children seldom were absent, and always ranked well in their studies, causing him to entertain in them a natural and justifiable pride. His pleasantest and happiest hours were those enjoyed at his home fireside, surrounded by his wife and children. He will be missed not only by those of his home circle, but by his many friends and acquaintances throughout this portion of the Adirondacks. Mr. McClelland is survived by his widow and nine children, two sons and seven daughters, who have the sympathy of the community in their bereavement. The funeral service was held at the Methodist Episcopal Church on Friday, Oct. 22, and was conducted by the Rev. Clarence Miller, assisted by the Rev. Mr. Sevell.