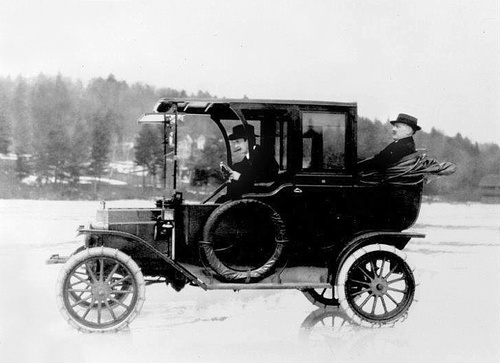 Jay T. Stickney was the president of A. Fortune and Co.; he was a World War I veteran.

Jay T. Stickney, Sr., for 27 years associated with A. Fortune and Co., Inc., in Saranac Lake, died suddenly at 9:30 a. m., yesterday, at the Saranac Lake General Hospital, where he was admitted three weeks ago following a heart attack. Friends may call at the chapel of A. Fortune and Co., 40 Church st. Funeral services will be private.

Arrangements are incomplete pending the arrival of his son, Jay T. Stickney, Jr. from Eielson Air Force Base, Alaska. Burial will be held in Pine Ridge Cemetery.

Mr. Stickney was born on March 19, 1890, in Bloomingdale, the son of Charles J. and Mallie Wardner Stickney. He had marked his 65th birthday on Saturday.

A graduate of the Saranac Lake High School, Mr. Stickney attended the Carnegie Institute of Technology, Pittsburgh, Pa. During his 27 year association with Fortune's, he had served 14 years as company president following the death of his father.

Mr. Stickney was a veteran of World War I, having served with the 303rd Heavy Field Artillery in France. He served as Village Trustee for five years and had served as a member of the Board of Education for six years, one year of which he was president.

Previous to his association with Fortune's he had worked for the Kollecker Art Store.

Besides his son, Mr. Stickney is survived by his widow, the former Bertha Homburger, whom he married in 1951. His first wife, the former Helen Eldred, of Ithaca, died in Saranac Lake in 1948.