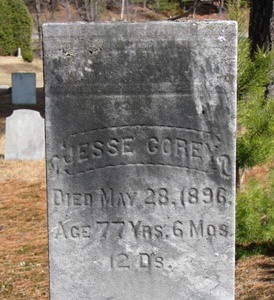 Jesse Corey (sometimes Cory or Correy)  was the first settler on Upper Saranac Lake. According to Donaldson, he built his first home on the Sweeney Carry about 1830; however, he would have been 12 at the time. Donaldson continues "After staying there a while, he moved out west, only to return a few years later, settling on the Indian Carry, where he built the Rustic Lodge in 1850." In 1894, he retired to Axton Landing, leasing the lodge to Charles H. Wardner. The settlement of Corey's near the Stony Creek Ponds bears his name.

By 1870 he was living in Brandon with his third wife, Martha.