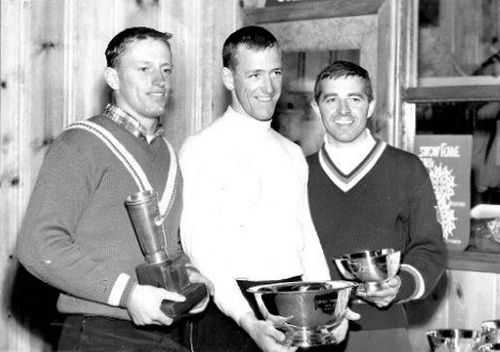 A different version of this photo was printed in the Nevada State Journal on February 28, 1962 with a caption that read: "Top skiers in the combined National Four-Way Championships and Snowshoe Thompson Nordic competition are shown with awards which they received following the close of competition Sunday. . . . Jim Bombard (center) of Western State College, National Four-WayChampion, joins teammate Jennings Cress, also of Western State, winner of the class “B” combined Snowshoe Thompson competition and former Olympian Al Vincellette, winner of the Thompson “A” combined. Cress, in addition, received the Holmenkollen Trophy (which he is holding) from the Norwegian Ski Association for winning the Thompson cross-country race.
Courtesy of Natalie Leduc.Born: c. 1941

It's welcome home week for Saranac Lake's four event National Skiing Champion Jim Bombard. The 21-year-old champion found his skiing legs on Betters Hill and Mount Pisgah and went on to beat the best in the country at Lake Tahoe, California last winter. 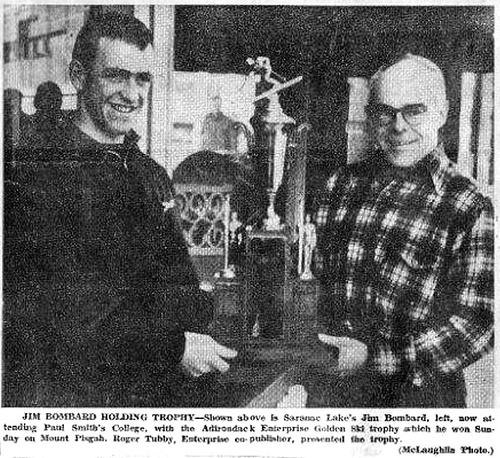 Jim Bombard, left, with Roger Tubby.
From an undated unidentified news clipping almost certainly from the Adirondack Daily Enterprise as Roger Tubby was the newspaper's co-publisher. Taken by Enterprise photographer Bill McLaughlin.  Courtesy of Natalie Leduc.Bombard was welcomed home with a surprise party put on by the Saranac Lake High School Ski team at Durgan's Saturday night and today he spoke to the Rotary Club on the major breaks in his skiing career.

Born on December 8, 1939, he is the son of Mrs. Charlotte Bombard and the late Douglas Bombard. He has four brothers and sisters: Douglas, Natalie (Mrs. Corl), John, and Madeleine. Bombard said he cannot remember the first time he was on skis, but before the days when Mount Pisgah was open he used to climb Betters Hill on the road to Lake Kiwassa. When Pisgah became a reality, he would stay in condition by hiking two miles from his home to the hill.

In those days he remembers skiing with many of the men who are still active in the sport in Saranac Lake. Among them were skiers like Tom Cantwell, Joe Perry, Bill Demerse, and Tom Finnigan. Of course, there were also his brother and sister, Nat and Doug, who were his first teachers.

At SLHS, he was already a four-event skier, competing in the downhill, slalom, jump, and cross country. Although he has winner's medals from his high school racing days, Bombard says he really got moving in college. After graduation from SLHS in 1958, he went on to Paul Smith's College in 1958 where he also raced in four events.

Then he entered Western State College at Gunnison, Colorado, where the coach believed his skiers should "build up a tremendous disrespect for distance." In their training program, ten mile jaunts on foot were average.

From Gunnison, he went to the national Championships at Lake Tahoe and won the four-way title. He took third in the slalom, second in the downhill, second in the jump, and fifth in the cross country. This record was compiled against the best skiers in the nation.

On the trail at Gunnison last winter, he also broke the record of Olympic star Bud Werner by 5 tenths of a second in the downhill. But Bombard notes that his record was broken soon afterward by another Olympian, Dave Gorsuch.

Jan Bombard is back to his old summer occupation at present carrying the mail through Upper Saranac Lake from Saranac Inn.

With his degree in social studies - sociology and psychology from Western State which he received this spring, Bombard will head back to Colorado to take on a coaching fellowship in 1963. This next year, he will be a student teacher at Western State.

His future ambition is to teach either sociology or psychology at a junior college and coach skiing.

In his speech at Rotary today, Bombard outlined the four major breaks in his career which led to the national championship.

He said the first came from the fact that his mother put him on skies when he could hardly walk with the result that he was always at home on the snow.

His second break came when Mount Pisgah was opened and developed by the village. This, he said, gave him the incentive to train and work at his skiing and the place to do it.

Third was that through his skiing ability he was able to attend Paul Smith's College, and Bombard says he is greatly indebted to Dr. Chester L. Buxton, President of the college, for the opportunity made available to him and the help given him.

The fourth great break came when he was accepted to Western State College where he had the best in coaching, competition and skiing conditions.

The Village of Saranac Lake has been showing its pride in Jim Bombard in recent days. With a broad smile, he said he was completely surprised by the party given for him by the ski team, and he was obviously pleased.

Today, the businessmen of the community, through the Rotary luncheon, showed their pride in the boy from Mount Pisgah who took the best on the big mountains.

Bomby was first and foremost a skier. He turned his love of the sport into his life's work in the ski business as a sales representative.

Along with those duties he traveled extensively throughout the western mountain territories of Idaho, Utah and Montana.

He started with Head skis, the revolutionary first ski made of metal. He ended up with the famous U.S. ski brand K2. To say that he was loved by everyone  he came in contact with is an understatement. The ski shops would literally light up when he walked through the door. After he retired, there wouldn't be a day that would go by without someone stopping by to visit and talk skiing! He made skiing a better sport.