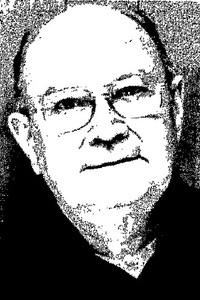 Jim Finn is a newcomer to town, having moved here from Canada only in 1919, thirty-eight years ago. His career is one of those wonderful stories of Americana: Left high school, started in a print shop completely "green", stayed in the same, shop until he learned everything there is to know about printing, began to buy into the business, finally bought the business, and then set out to expand it.

It is good news to the community that Jim is going to build a brand new printing establishment. We are sure it will be a fine well equipped shop and that it will turn out the very best quality work in line with the tradition Jim learned under Al Currier and has carried on since he took over that business. […]

Finn, a Republican, had served on the Harrietstown Town Board from 1966-77 and was Franklin County District 7 legislator from 1978-79.

His other civic commitments included membership and a past presidency in the Saranac Lake Area Chamber of Commerce and membership on the Harrietstown School District No. 1 school board for many years.

In 1930, he started working for the Currier Press of Saranac Lake and became sole owner in 1952. In 1957, he combined the business with Commercial Press, then owned by Leo McKillip. He retired in 1984.

Finn was a long-time member of Elks Lodge 1508 in Saranac Lake and past Exalted Ruler of the Lodge from 1957-58. He founded the Ladies of the Elks here in 1959.

He was also a former member of St. Bernard's Church Parish Council. His first wife, Adelaide Clancy, died in 1947.

He is survived by four brothers, Raymond and Robert Finn, both of Saranac Lake, John Finn of Clarksville, Tenn., and Roy Finn of Rochester; two sisters, Mrs. Ruth Wilson of Framingham, Mass., and Mrs. Grace VanNostrand of Saranac Lake; and several nieces and nephews.

A Mass of Christian burial will be held Saturday at 10:30a.m.at St. Bernard's Church with Father Frank Coryer officiating.

Burial will be in St. Bernard's Cemetery in May.

Donations in Mr. Finn's memory may be made to the American Red Cross in care of the funeral home.