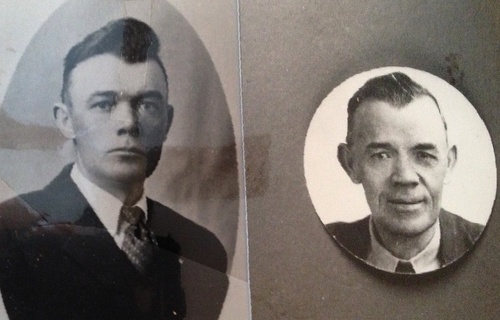 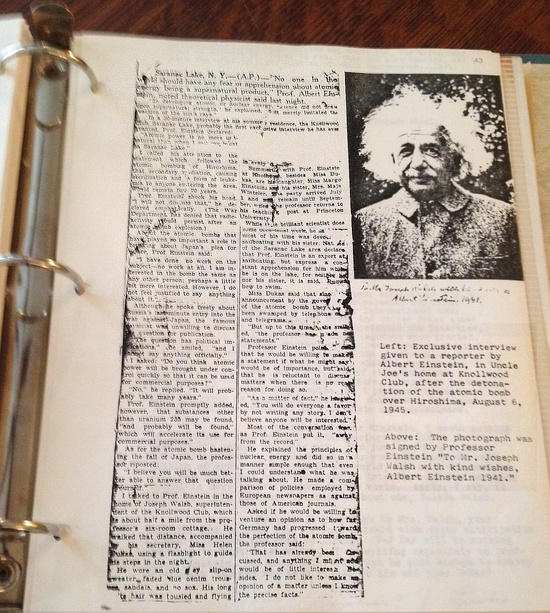 Joseph Francis Walsh was the foreman on the Rockefeller estate at Bay Pond until 1924 when the property was sold. He then became superintendent of the Knollwood Club, whose members included many wealthy New York families, among them the Bloomingdales. Albert Einstein was a frequent visitor in the 1940s. Much to the consternation of his friends, who feared for the safety the famous physicist, he enjoyed sailing on Lower Saranac Lake, where the club is located. Courtesy of Edward Walsh"I was a very good friend of Joe Walsh who was Knollwood's caretaker or superintendent from 1926 until Bernard Van Cour succeeded him in the late 1940's. Joe, of course, was much older than myself. He had a daughter but no son and considered me as a proxy son late in his life. He used to write picturesque letters to me. I think I still have many of them. I think he passed away in late 1963."

The following story comes to us from Edward Walsh from his father's family history section about Joe Walsh:

One evening Uncle Joe and I went fishing in a place known as Monty's Dam in the St. Regis River. There was little evidence that a dam ever existed, but the water flowed swiftly over the stony riverbed and eddied around boulders into a pool where trout lurked in wait for worms and insects.

Uncle Joe fished while wading the stream and I fished from the riverbank with a rod that he made for me. He had selected a sapling of suitable kind, stripped of its foliage and shaped it with his jackknife until it was flexible and resilient. It was my first fishing rod and I was very proud of it. We fished for a while with indifferent success and, although we caught only small fish, landing even the smallest of them was exciting for me.

Finally Uncle Joe hooked a large trout that wriggled out of his grasp while he was trying to put it into his creel. It fell headfirst into a narrow water-filled crevice between two rocks, where it was trapped with only the tip of its tail sticking out. He tried to retrieve the fish, but the fingernails of his workman's hands were so short that his fingers slid off the slippery tail. Then my uncle, a resourceful angler, bent down, closed his teeth on the protruding tail and waded to the shore with the wriggling fish dangling from his mouth like a mouse in the jaws of a cat.

Physicist Explains Nuclear and Solar Energy, but Refuses to Discuss Use in Bomb SARANAC LAKE, N.Y., Aug. 11 (AP)—"No one in the world should have any fear or apprehension about atomic energy being a supernatural product," Prof. Albert Einstein, noted theoretical physicist, said last night.

"In developing atomic, or nuclear energy, science did not draw upon supernatural strength," he explained, "but merely imitated the reaction of the sun's rays."

In a thirty-minute interview at his summer residence, the Knollwood Club, Professor Einstein declared:

"Atomic power is no more un-natural than when I sail my boat on Saranac Lake."

I called his attention to a statement that followed the atomic bombing of Hiroshima that secondary radiation, causing sterilization and a form of leukemia to anyone entering the area, would remain for seventy years.

Professor Einstein shook his head. ''I will not discuss that," he declared emphatically.

About the atomic bombs that have played so important a role in bringing about Japan's plea for peace, Professor Einstein said:

"I have done no work on the subject, no work at all. I am interested in the bomb the same as any other person; perhaps a little bit more interested. However, I do not feel justified to say anything about it."

Although he spoke freely about Russia's last-minute entry into the war against Japan, the famous physicist was unwilling to discuss the question for publication.

I asked, "Do you think atomic power will be brought under control quickly so that it can be used for commercial purposes?"

"No'", he replied. "It will probably take many years."

Professor Einstein promptly added, however, that substances other than Uranium 235 might be found, "and probably will be found," to accelerate its use for commercial purposes.

As for the atomic bomb's hastening the fall of Japan, the professor parried, "I believe you will be much better able to answer that question yourself."

Professor Einstein said that he would be willing to make a statement on the atomic bomb if what he might say would be of importance, but added that he was reluctant to discuss it when there was no real reason for doing so. "As a matter of fact," he laughed, "you will do everyone a favor by not writing any story. I don't believe anyone will be interested."

He explained the principles of nuclear energy and did so in a manner simple enough that even I could understand what he was talking about.

Asked if he would be willing to venture an opinion on how far Germany had progressed toward the perfection of the atomic bomb, the professor said. "That has already been discussed, and anything I might add would be of little interest. Besides, I do not like to make an opinion of a matter unless I know the precise facts."