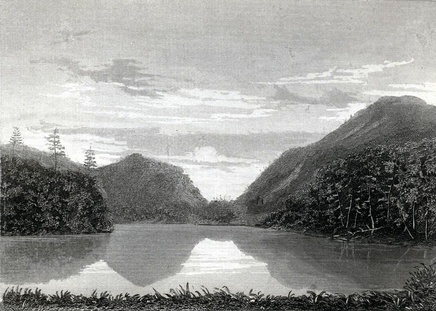 But I will not enter into the details of this tedious tramp. I cannot make you see the dark spruce forest, with its carpet of moss, and paths of wild deer and bears trodden hard by their frequent passage from the mountains to the streams; nor induce you to follow with your eye that crooked river that seems, since we last crossed it, to have stolen round and lain in ambush in our path, so suddenly and unexpectedly does it again appear before us. But, after wading it half a dozen times, just stand here a moment on the bank of a new stream, and look through those huge hemlocks into that awful mountain gorge. That lonely sheet of water, spreading there so dark and yet so still, is Lake Golden, and looks, amid those savage and broken hills, like Innocence sleeping on the lap of Wrath. How peaceful and how lonely it seems in its solitude! — and it shall linger in the memory like some half-sad, half-pleasant dream. From this we struck across to the Opalescent River...  Letters from the backwoods and the Adirondac, p. 18-19 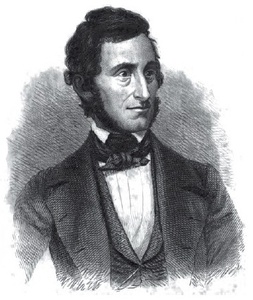 Joel T. Headley
Letters from the backwoods and the AdirondacBorn: December 30, 1813

Joel Tyler Headley was an American clergyman, historian, author, newspaper editor and politician who served as a member of the New York State Assembly in 1855 and was New York Secretary of State from 1856 to 1857.

He was born at Walton, New York to a Presbyterian clergyman father. Upon graduation from Union College in 1839, he took a course in theology at the Auburn Theological Seminary in Auburn, New York. After being ordained, he preached at Stockbridge, Massachusetts, but soon gave up his profession due to the strain. He turned to history writing, producing many works on various subjects. In his 1850 Letters from the backwoods and the Adirondac, he was among the first to call attention to the Adirondacks as a health resort. He later accepted an offer from Horace Greeley to became associate editor of the New York Tribune.

He was an early visitor to the area, and wrote of its hunting and fishing, of its guides and guideboats, and of its history. He is known to have been guided by Mitchell Sabattis and Martin Moody, and to have stayed at Martin's.