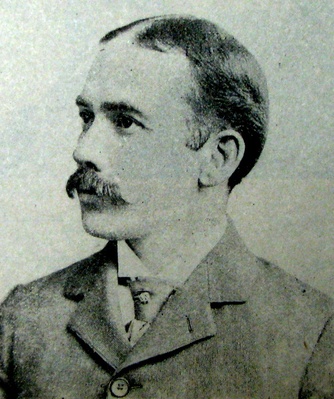 John Harding came with his parents to Canada when young. He worked at Paul Smith's Hotel as a telegraph operator from 1878 to 1889, except for the winter of 1884, when he worked at a hotel in Ocala, Florida. He was chief clerk at Paul Smith's when he left to take the management of Hotel Ampersand. In the spring of 1890 he purchased the Algonquin Hotel.

In 1895 he built the Harding Block where established the Book Store in partnership with E. L. Gray, to whom he later sold his interest in the business. For four years he managed the Berkeley Hotel. He was one of the best-known men in the county, and an influential Democrat. He was appointed postmaster during the second administration of President Grover Cleveland, and he was supervisor of Harriettown for four years. He was president of the village of Saranac Lake for two years and served for a time on the board of education of the town. He was a member of the board of trade and served for a time as its president. He was vice-president of the local Building and Loan Association; a trustee of the Reception Hospital; president of the Saranac Lake Skating Club, and president of the Pontiac Club. He also served as second vice president of the International Skating Union of America. 1

He was a member of White Face Mountain Lodge, No. 789, Free and Accepted Masons; the Wanneta Chapter, Royal Arch Masons; the Franklin Commandery, Knights Templar, of Malone; and of Karnak Temple, Mystic Shrine, Montreal. He is buried in St. John's Cemetery in Paul Smiths.

Adapted from original text by Philip L. Gallos at the Harding Block:

John Harding was Saranac Lake's mayor for several terms and the owner of the Algonquin Hotel. He had been assistant manager of Paul Smith's Hotel, and then worked at the Ampersand in 1888. When a hotel called "Alexander's" went on the market, he bought it, renamed it the Algonquin and made it famous. The location of the hotel is now the site of the Trudeau Institute, a world renowned research facility where the investigative work begun by Dr. E. L. Trudeau and Dr. E. R. Baldwin continues. Harding sold the Algonquin in 1920 to William W. Hanes of underwear fame.

In 1917, the Hardings began the process of severing ties with the area in preparation for moving to Burlington, Vermont, where John Harding had made arrangements to buy two major hotels. Due to their association with Paul Smith's Hotel, the Hardings were close friends of Phelps Smith. Another friend of Phelps" was Edward J. Kennedy who had worked for Leonard's, then had gone into a partnership with George A. Toupin at 8 Broadway, and was looking for a place to start a business of his own. Smith got the Hardings and Kennedy together and ownership of the Harding Block passed from Emma T. Harding to E. J. Kennedy in March, 1918.

From the Chateaugay Record and Franklin County Democrat, December 29, 1911

John Harding, of Saranac Lake, vice president of the International Skating Union, in control of amateur skating in this country and Canada, is in correspondence with other officials of the union relative to the schedule of championship races this winter. The schedule is fixed by mail vote of the officers. The international outdoor championships will probably be held at Saranac Lake this winter. It has been customary to hold these events at that place and Montreal on alternate years. As Montreal had the international championships in 1911, there is but little doubt but that Saranac Lake will be designated in 1912.

As a member or members, John Harding and his wife, Emma T. Harding, were named in the sale of Pontiac Club property to the Saranac Lake Boys' Club, Inc., in 1917.