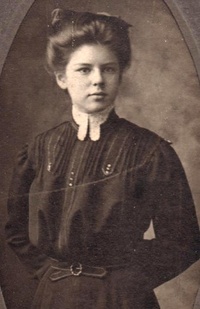 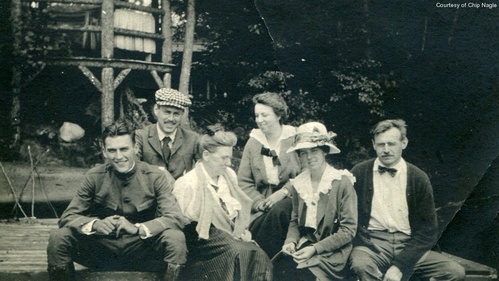 John Innes Kane was a member of one of New York's oldest families; he was a great-great-grandson of John Jacob Astor, and a tuberculosis patient. With his wife he owned the Mark Twain Camp on Lower Saranac Lake.

The wedding of John Innes Kane of Ossining, N. Y., a son of the late John Innes Kane and Fanny Randall Kane, and Miss Marjorie Elliott Simmons, a daughter of Mrs. E. E. Simmons of Wilmington, Del., took place yesterday afternoon at All Saints' Church, Chelsea, N. J. The ceremony was performed by the Right Rev. Dr. Frederick J. Kinsman, Bishop of Delaware, assisted by the Rev. John W. Williams, rector of All Saints' Church. Miss Edith Simmons, a sister of the bride, was the maid of honor, and the bridesmaids were the Misses Jessie Post and Dorothy Simmons. Orlando B. Potter was Mr. Kane's best man, and the ushers were Edward Winslow Kane, Wells Sargent Dickinson, Howard Seaman, and John L. Feeny. A small reception followed the ceremony.

From the Adirondack Daily Enterprise, August 18, 1976, "Memories of a classic regatta", by Bill McLaughlin, about the Saranac Lake Boat and Waterways Club's summer's end regatta:

The regatta was widely publicized around the state as early as 1922 with the dominant figure John I. Kane, whose mastery of his boat Adios II over the 6-mile course established him as the favorite for several years.

Adios II, a 22-foot, 2000 pound Fay Bowen with long slim lines, gave competitors anywhere from 2 to 4 minute handicap allowances and was still able to come in first under the wire.

An estate estimated worth nearly of $10,000,000 will go to charities. educational institutions and art and scientific institutes under the will filed for probate in surrogate's court in New York Wednesday of Mrs. Annie C. Kane, widow of John Innes Kane, great grandson of the first John Jacob Astor, and daughter of the late William C. Schermerhorn, wealthy Art patron.

Bequests of $1,000,000 each are made to Columbia University and the Home for incurables. The Metropolitan Museum of Art and the Cooper Union for the Advancement of Science will divide the famous Kane collection of paintings, tapestries and art objects, estimated to be worth $3,000,000.

Eighteen other charitable. Educational and religious institutions in and out of New York receive legacies ranging from $25,000 to $200,000. The residuary estate is left to the executors to be distributed among…