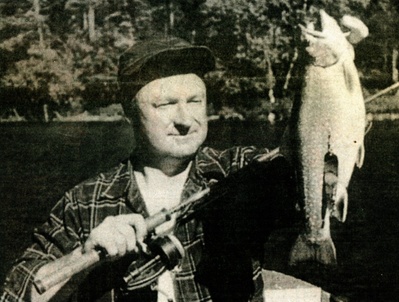 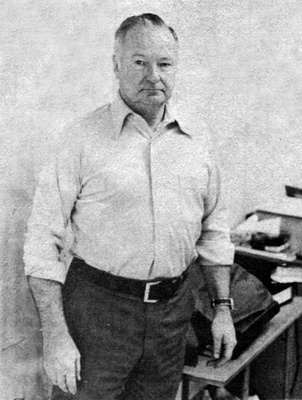 John J. Duquette was the Saranac Lake Village Historian. He was the son of William F. Duquette and Katherine Duquette, who lived at 14 Marshall Street. John's mother ran a laundry for the cottages, according to Mary Hotaling's notes.  He was a World War II veteran.

SARANAC LAKE - John J. Duquette, 81, formerly of Saranac Lake, died Tuesday at his home in St. Augustine Fla., where he had been a resident since Oct. 20, 1995.

Mr. Duquette was a former columnist for the Adirondack Daily Enterprise. His writing focused primarily on the history of the northern Adirondacks. While serving in World War II, he became interested in collecting books, eventually establishing an extensive collection with a focus on the Adirondacks.

Mr. Duquette was a member of the Saranac Lake Free Library Board of Directors and was serving as president when the library's Adirondack Room came into being. In a 1987 interview published in the Enterprise, Mr. Duquette said he never intended to be a historian, "but people started calling up and asking questions." He served as the Saranac Lake Village Historian for 20 years until his retirement.

Born Aug. 7, 1917 in Saranac Lake, he was the son of William and Catherine (LeBeau) Duquette. 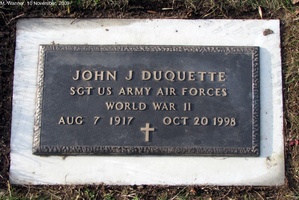 Mr. Duquette won the international speedskating championship for the 10-year-old class in the winter of 1927.

Mr. Duquette was a graduate of Saranac Lake High School and was employed by Paul Smith's Electric Light and Power Co. and Niagara Mohawk from 1937 until his retirement in 1980. He was a veteran of World War II, serving in the Army Air Corps. He married Claire Bedell on April 5, 1942.

Survivors include his wife; one son, William J. Duquette of Hickory, N.C.; two daughters, Martha Ann Guzzardi of New Britain, Conn, and Ruth D. Fortune of Saranac Lake; three sisters, Rita Hadjo and Eleanor Vitullo of Saranac Lake and Shirley McGill of Lake Clear; eight grandchildren and several nieces and nephews. He was predeceased by a son, John J. Duquette in 1957 and a brother, William.

Calling hours are from 4 to 6 p.m. Friday, Oct. 23 at the Fortune-Keough Funeral Home in Saranac Lake. A Mass of Christian Burial will be held at 11 a.m. on Saturday at St. Bernard's Church in Saranac Lake, with the Rev. Timothy Soucy officiating. Interment will follow at the St. Bernard's Cemetery.

Memorial contributions may be made to St. Bernard's School in care of Fortune-Keough Funeral Home.

John Duquette is a man who knows how to put history in its place.

The 40 year employee of Paul Smiths-Niagara Mohawk is Saranac Lake's village historian who helps bring the past up to date where a community can use it.

Mr. Duquette was recently singled out by the power corporation for special recognition for fostering community relations during his company service. And 40 years on the job now seem like nothing at all to him. He said: "When you love your hometown and the people you grew up with, the job becomes simply an extension of your personality and affords the opportunity to give something back to a community that becomes very special when you are a native son."

John Duquette never towered over his schoolmates, friends or associates in height. But from the time he was a junior in the Saranac Lake High School, he towered over most of them in accomplishments.

Despite his 99-pound weight as a young man. Mr. Duquette competed in football, basketball, track and baseball. He made his presence felt in every phase of school life and held enough class offices to set him apart as a strong prospect for success after his graduation in 1935.

John's father, the late William F. Duquette, was a widely known electrical contractor in the village. His mother is Catherine LeBeau Duquette. His family life, he claims, was lively with three sisters and a brother competing for the spotlight at home.

As an elementary student at St. Bernard's, he received six years of strict basic education among the religious. He enjoyed a natural ability to draw. And cartooning was one of the things that set him apart.

Caricature also gave him a weapon that he used with rapier like subtlety. On the few occasions he got in trouble in school, it was because he drew pictures of the teachers with an engravers excellence of line and detail coupled with the caricaturists barb.

Following graduation, he attended Kansas State Teachers College as an aviation cadet. He went to work for Paul Smiths Electric in 1937 as a map draftsman. He was given jobs of increasing responsibility almost from his first day with the company. He quickly became assistant to superintendent Raleigh Finch and remained in the post from 1946 to 1965. He became superintendent of lines from 1965 until the merger with Niagara Mohawk.

Mr. Duquette had served in the Air Force in the early 1940's when he married the former Claire Bedell. One daughter, Ann Guzzardi, is a dietician in New Britain. Conn. A second daughter. Ruth Fortune, reaches fourth grade students in the Saranac Lake school system. A son, William, is a senior at Penn State.

Mr. Duquette's spare time is spent hunting and fishing. But the problem is that he doesn't have much spare time. His duties with Niagara Mohawk demand constant attention.

He started out as N-M's electrical planner and advanced to general line foreman in 1972. At present, he is supervisor of transmission and distribution. Mr. Duquette thinks he would like to retire in two years but it is not mandatory that he step down until 1982.

When he does retire he has a big job awaiting him as village historian because without his dedicated guidance the Saranac Lake Free Library would probably have few Adirondack historical files of significant impact. His tenacity to the ideals of keeping track of what is happening has placed the village among the state's best catalogued communities both pictorially and in text.

The mountain of facts, lying dormant in the library basement, should reveal that John Duquette is a former international speed skating champion. He won the 10 year old crown in the last international event held in Saranac Lake in 1927. Fellow workers today say he is in just as good shape now as he was in 1927.

Saranac Lake's library has been his most challenging civic endeavor. Besides holding the historian title for 10 years. Mr. Duquette is chairman of the Adirondack Committee of the library and has taken great pains in assembling files housed in the William Chapman White Memorial Rooms.

He is a past president and trustee of the library and his efforts have been of incalculable worth over the years. Perhaps it was with this in mind that the publishers of Harbor Hill Books asked him to compose a new introduction to Donaldson's History of the Adirondacks last in print over a half century ago. The valuable double volume record of Adirondack history was reprinted recently with the Duquette introduction.

If the volumes are ever brought up to the minute historically, it would have to be at the urging and perhaps self labor of Mr. Duquette who may find time in 1979 to take on such a project.

But the thought of research, sorting, grading and editing the mass information in the library basement is staggering to a man who might be thinking more in terms of rest and recreation when he leaves Niagara-Mohawk.

In getting the new introduction in manuscript form, Mr. Duquette was fortunate in having at hand the original Donaldson research, notes and materials already in the library to which they were willed by the author for safe keeping.

He claims he has not done any serious cartooning since his school days but the fact is obvious that a very saleable and interesting book on Saranac Lake could be written and illustrated by anyone with the background and talents of John Duquette.