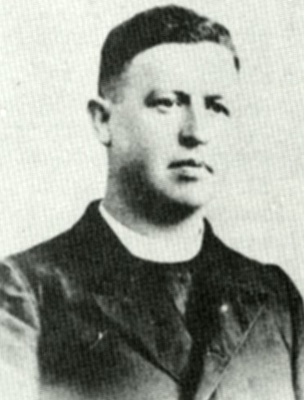 Father John J. Waters was a Roman Catholic priest who was ordained by the bishop of Ogdensburg in 1890. Around 1891, he was sent to Saranac Lake to start St. Bernard's Church.

The first regular Catholic services held in Saranac Lake were held in the Spaulding block, where Father John Waters, as a young priest, conducted the services which soon grew into a flourishing parish.

In addition, he established four mission chapels, traveling from one to the next on a weekly rotation, in Bloomingdale, Lake Clear, Paul Smiths and Lake Placid; these all eventually became independent parishes. He traveled from town to town on his cream-colored horse to perform his religious services. After the Saranac and Lake Placid Railroad was built in 1893, and when the weather was too severe, he took the train to Lake Placid and celebrated Mass in a room in the American House Hotel, across from the railroad station on Averyville Road. Once St. Bernard's was completed by Branch and Callanan builders in 1892, Father Waters turned his attention to the need for a church in Lake Placid. As a leader, Father Waters worked side by side with early Adirondack pioneers to build his churches. He had a talent for raising money, much of it coming from wealthy summer guests. He served as pastor of St. Agnes from 1894 to 1903, and is counted as their "true founder." After St. Agnes Church (the first one, on Main Street in Lake Placid) officially became a parish in 1900, Father Waters returned to St. Bernard's. He remained as pastor of St. Bernard's for 31 years until his death at age 61 of heart failure at St. Mary's Hospital, Ampersand Avenue.