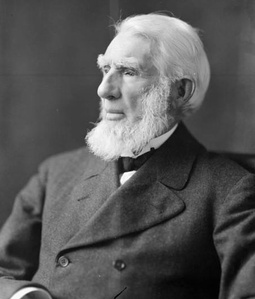 John Rudolphus Booth was a Canadian lumber and railway baron. He controlled logging rights for large tracts of forest land in central Ontario, and built a railway (the Canada Atlantic Railway from Ottawa through to Georgian Bay) to extract his logs; and from Ottawa through to Vermont to export lumber and grain to the United States and Europe. During the latter years of his life, Booth's fortune was estimated at up to $100 million. 1

In an article he in the 1937 yearbook of the National Ski Association, Henry Ives Baldwin wrote "My father [Dr. Edward R. Baldwin] recalls that John R. Booth of Ottawa, of the famous lumber family, [in 1892] rented for the winter the Roberts Cottage2 in Saranac Lake where his daughter "cured" for several years." 3 Booth brought a pair of skis with him, thus introducing the sport of skiing to the area.

1. Wikipedia - John Rudolphus Booth
2. This is apparently not the Roberts Cottage on Park Avenue, which was not built until c. 1917, but it may be the Joseph Roberts Cottage on River Street
3. Henry Ives Baldwin, "The Relative Antiquity of Skiing in the Adirondacks", in American Ski Annual Official yearbook of the National Ski Association, Steven Daye Press, Brattlebobo, VT, 1937. p. 58.