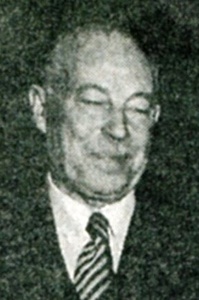 John Ridenour was the publisher of the Adirondack Enterprise.

From an article on the Fowler Block by Philip L. Gallos

John Schell Ridenour, former publisher of the Adirondack Daily Enterprise, died yesterday at the age of 82 at Sibley Memorial Hospital in Washington D. C. He had had a heart attack in March and had been ill ever since.

Mr. Ridenour, former publisher at the Adirondack Daily Enterprise, was born Nov. 27, 1882 in Bedford, Penn. the son of John Wheeler and Eleanor Schell Ridenour. He was a member of the Class of 1908 in the engineering school of Cornell University and the first pledged member of the Seal and Serpent Society.

After college, Mr. Ridenour gained experience in the news and advertising departments of Philadelphia and Chicago newspapers and was employed for a time in an advertising agency. He returned eventually to his home to purchase and publish The Bedford Inquirer.

In 1916 he served as a first lieutenant with the Pennsylvania National Guard during the Mexican Border Dispute and, when the United States became involved in World War I, sold his newspaper to serve in France with a machine gun company of MacArthur's Rainbow Division.

At the close of the war Mr. Ridenour came to Saranac Lake where, late in 1913, he purchased The Adirondack Enterprise, then a semi-weekly newspaper, from the late Kenneth Goldthwaite. The community was thriving in the post-war era and 1920 saw The Enterprise expanded to tri-weekly publication.

Mr. Ridenour was married April 16, 1921 to Miss Clara Eloise Wilcox, of Utica. The couple made their home at 132 Park Avenue and had two daughters, Mrs. Arthur W. Wareham of Saranac Lake and Mrs. Andrew Cheselka of Setauket, L.I.

Surviving besides his wife and daughters are three grandchildren, Andrew Jr., and John R. Cheselka and Ann W. Wareham.

As a newspaperman Mr. Ridenour set high standards of dignity and efficiency on his publications. A former engineer, he worked closely with other members of the newspaper world on time and motion studies in the mechanical department and was particularly interested in the development of machinery which would improve publication. He had been studying the creation of the Wood single unit press when, in July 1926, the Harrietstown Town Hall In which the Enterprise was housed, burned to ground, destroying all the paper's equipment.

From July to November 1926 the tri-weekly Enterprise was published in Malone through the kindness of the Malone Evening Telegram and the local staff took great pride in the fact that, despite the fire, the paper never missed an issue.

Offices for the Enterprise were opened at the present address, 72 Main Street [sic: see 76 Main Street], and the composing and press rooms added in the rear. Mr. Ridenour sought out the most modern equipment of the time and several engineers were involved in the mechanical layout of the new newspaper. The publisher secured for the new Enterprise the Wood Beeline Press, first single unit rotary newspaper press designed especially for the small daily newspaper. Outstanding in efficiency and economy to run, the Beeline Press proved too expensive to produce. Only two were made and the other sold to a newspaper in Jerusalem. This press, unique in the United States and one of two in the world, is still printing the Enterprise today.

Editorially, Mr. Ridenour instructed all newcomers to the newsroom to "write the story as though it were your father, mother, sister or brother you are writing about." He was deeply interested in all phases of the development of Saranac Lake and a strong supporter of conservation. In the latter field he cooperated with the then District Game Protector, the late Ray L. Burmaster, in publishing a monthly list of convicted fish and game violators, the theory being that in such a conservation-minded community the humiliation of being publicly known as a conservation offender would far outweigh any financial fine imposed. So successful was their method of reducing conservation offenses that it was later adopted on a statewide basis by the New York State Conservation Department. He was instrumental in the organization of the Saranac Lake Study and Craft Guild and served on its board of directors.

The Adirondack Daily Enterprise was published by Mr. Ridenour until its sale to Frederick Kury on May 1, 1949. Mr. and Mrs. Ridenour sold their home in Saranac Lake in 1957 and moved permanently to Washington, D.C.

In Saranac Lake he was a communicant of the Church of St. Luke, the Beloved Physician and had served for 30 years on its vestry.