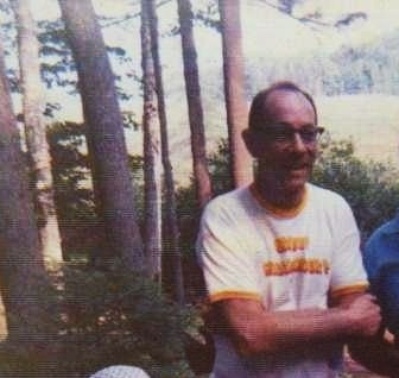 Children: 1 daughter and 3 sons with 1st wife; one son, Richard, with 2nd wife

John Thomas Merritt, known as Jack, served in the Army Air Corp, was a Weather Observer on Whiteface Mountain and was the Company Commander of the National Guards at the National Guard Armory in the early 1950s before moving to Baldwinsville, New York in 1955. Jack returned to Saranac Lake with his 2nd wife & their son in 1970. Jack was an active member of R.E.A.C.T. and Elks Lodge 1508.

In May 1948 John and his bride set up residence at 40 Shepard Avenue.

On February 2 two of the men came down from Whiteface Mountain after their turn of duty taking weather observations. Gordon Zangerle had with him a new man, John Merritt of Saranac Lake, a veteran of the Pacific area, an aerial gunner on a medium bomber.

They reported that the month of January was unusual in that there was just one clear day during the entire month. Every other day was foggy on the mountain. There were only four days when the wind velocity was less than 32 miles per hour.

PROMOTION OF SARANAC GUARD ARE ANNOUNCED

Capt. Andrew Fortune is commanding officer of the company.

SARANAC LAKE - John T. Merritt, 296 Broadway, died Saturday morning at the Champlain Valley Physicians Hospital where he had been a patient for the past two weeks.

He was born on December 17, 1922 in Brooklyn, the son of Benjamin and Margaret Mahady Merritt.

He is survived by his wife, the former Barbara Burns, a son Richard of Saranac Lake, and a brother Frank of Lewisburg, Pa; Mr. Merritt was the owner-operator of a gas station (1) in Liverpool for 18 years. In 1970 he moved back to Saranac Lake and was a liquor salesman throughout the North Country.

He was a veteran of World War II and Korea and was a Captain in the Air Force.

He was a member of Elks Lodge, 1508 and had been commander of the National Guard here. He was active in the Hockey Association.

An Elks service was said Sunday evening at the Fortune Funeral Home at 7:30, followed by a Bible Vigil. A Mass of the Resurrection was said this morning at 11:45 at St. Bernard's Church with Father Thomas Driscoll, officiating.

Those wishing to do so may make donations to their favorite charity in his memory.