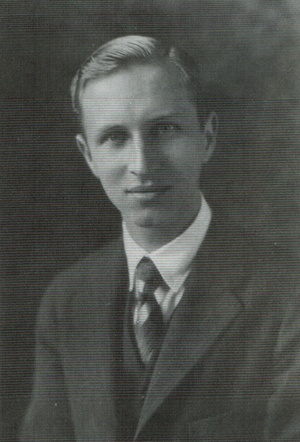 John T. Dalton's college photo from A Portrait of Healing

A brick has been dedicated in John T. Dalton's memory at the Saranac Laboratory MuseuBorn: 1899, Vancouver, Washington

"Jack" entered the Trudeau Sanatorium in 1923, his final residence being Ludington Infirmary. He was born in Vancouver, Washington, and attended Iowa State College before joining the war effort in the Student Army Corps, teaching telegraphy at New York University in New York City. By 1920, he was attending Dartmouth College, a member of Gamma Delta Epsilon. In 1921, Jack entered Cambridge University as a student in the classics.

His health issues began during the flu epidemic of 1918, from which he never completely recovered. Friends said that his training in the Student Army Corps weakened his health further.

In 1923, a diagnosis of tuberculosis was confirmed, and Jack left Cambridge University for Saranac Lake, arriving seven years after poet Adelaide Crapsey's death. Jack read, and was perhaps inspired by, Crapsey's poems while he was curing at Saranac Lake.

Despite the fact that Jack arrived at Trudeau hopelessly ill, he did much to add to the atmosphere of the San, and was beloved by staff and residents. (The rule which stated that a patient could only remain at the Trudeau for one year was overlooked in his case. Jack stayed for four years.)

With his experience in radio and telegraphy, Jack worked to bring the new medium of radio within the reach of all the residents of Trudeau - those residing in the infirmaries as well as the cottages; even going so far as to build new radio sets to be installed in Trudeau patient buildings. His play, "Tom Tooney of Trudeau" was presented in Saranac Lake in December of 1925. As a composer, his song "Land of Dreams" was published during his residency at his final home, Ludington Infirmary. Because of his great charm and kindness, Jack had many friends within the arts-and-letters world and otherwise, including New York City writer Robert Hobart Davis, who wrote a tribute to Jack ("A Great Heart That Dared Not Beat Too Fast") in his New York Sun column.

As much of his work did, his poem "Write Verse" seems to refer specifically to curing and his specific personal situation at the time of its writing.

In Summer, things are all my way; It's flower growing time. For when I want a big bouquet; I've always got a dime.

But when the snow begins to fly; I haven't got a chance. The other fellow's flower-talk Still breathes the same romance.

Oh, daffodils and crocus buds And orchids pink and blue! Oh, roses red and violets And white carnations too!

The other fellows send her these; I've but an empty purse. Aw, gee! What can a fellow do, But write her flowery verse!

Jack acknowledged his debt to his predecessor Adelaide Crapsey (and his terrific sense of humor) in his poem, "You've Shown the Way," which was subtitled, "To Adelaide Crapsey - Once of Saranac."

Thanks, Adelaide, you showed the way; I'm sorry you're not here to-day. Perhaps I'd make your verse less sad, And you could make mine far less bad.