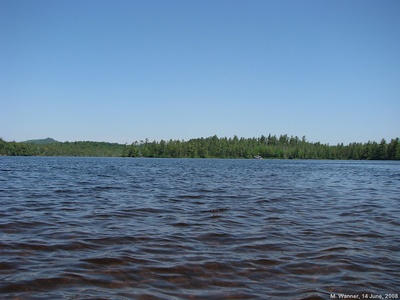 Jones Pond Jones Pond, also known as Lake Lucretia, is a 120-acre pond between Osgood Pond, Rainbow Lake and Gabriels. The eastern third of its shoreline is in private hands; the rest is part of the Debar Mountain Wild Forest.

New York State Architect Isaac Gale Perry is thought to have had a camp on Jones Pond, adjacent to the property of Gabriels Sanatorium. Perry designed and supervised the construction of three of the first buildings at the sanatorium without charging a fee. In gratitude, Mother Mary Kieran attempted to change the name of Jones Pond to Lake Lucretia in honor of Perry’s wife, but the new name did not “take” and the lake is still known as “Jones Pond” today. 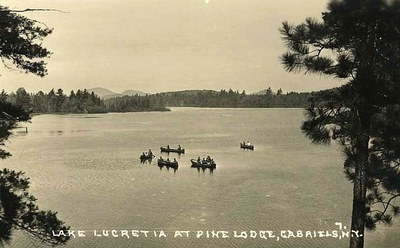 Lake Lucretia at Pine Lodge, C. 1915
Courtesy of the Adirondack Experience.Vere and Emma Mix, an Ogdensburg Nash (car) dealer, bought Pine Lodge on Lake Lucretia in 1934 and operated it summers until 1961, when he retired.

Supt. and Mrs. E. F. McDonald left Tuesday for Pine Lodge on Lake Lucretia to spend a week. Lake Lucretia is between Gabriels and Rainbow Lake.