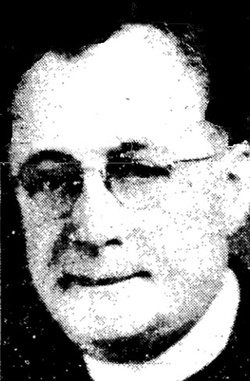 The Reverend Joseph Blais served as chaplain of St. Mary's hospital in Saranac Lake and the New York State Hospital at Ray Brook since 1929.  He served during World War I as chaplain of the Fourth Infantry, Third Division.

OGDENSBURG, May 3 (AP)— The Rev. Joseph M. Blais, 64, a twice wounded veteran of World War I, died last night. He was chaplain of St. Mary’s hospital at Saranac Lake and Ray Brook sanitorium near Saranac Lake.

Father Blais served for many years in San Antonio, Tex., diocese before assignment to the Ogdensburg diocese in 1915.

The Rev. Joseph M. Blais, 64, of 12 Broadway, chaplain of St. Mary’s hospital on Ampersand avenue and the New York State Hospital at Ray Brook, died at 6:10 o’clock last evening at the Hepburn hospital in Ogdensburg following a long illness.

Throughout his lifetime in Saranac Lake Father Blais was tireless in his efforts to aid anyone in distress and his interests extended into the activities of civic and veterans groups and the fraternal circles of the community.

Father Blais was ordained in the priesthood on July 26, 1908 at Tewksbury, Mass. He served as curate and pastor in various churches in Massachusetts and later in San Antonio, Texas.

He served parishes at Evans Mill and Chasm Falls and when World War I broke out was the first of a band of seven volunteer chaplains who joined up for service with the American Army. In 1917 he was sent to France as chaplain in the Fourth Infantry, Third Division of the Army.

He was in the heat of action in the Meuse and Argonne sections and later managed a club at St. Nazarre where as a staff member he served the welfare of 15,000 American troops. He was twice cited for bravery.

Father Blais was a fighting chaplain and was under fire in the strenuous struggles at Marne, St. Mihiel and the bloody battle of the Argonne. During the severest days of service he was always with his men and slept in trenches and shell holes while he ministered to the wounded, gassed and other casualties.

After release from the service. Father Blaise returned to his church work at Bedford and in 1929 soon after the death of the Rev. Father Brice, who was then chaplain at St. Mary’s hospital, Father Blais was sent to Saranac Lake where he remained until the illness which brought his death.

Highly popular with patients and permanent residents of this area Father Blais’ interests brought him into many of the activities of the community. He had served as chaplain of the Mose Minney-George Lyeth post, the Veterans of Foreign Wars, the Saranac Lake Elks lodge and the Kiwanis club.

He was connected with the Disabled War Veterans post and philanthropic societies of the village. Last July he celebrated his 40th anniversary in the priesthood.

Funeral arrangements were incomplete this morning.

Father Blais was born May 31, 1884 in Warren, Mass., the son of the late Peter and Rose Lesperance Blais. He studied at the Holy Angels college in Buffalo, the University of Ottawa and was ordained July 24, 1908, at Tewksbury.

He became a member of the Oblate Fathers order and became assistant pastor at Notre Dame church in Ogdensburg in 1915 when he was sent to that diocese.

Surviving him are a brother, George of Needham, Mass., and one sister, Mrs. Mary Fremault of Newton, Mass. According to Father Blais wishes interment will be in St. Peter's cemetery in Plattsburg.

Hundreds of residents, Diocese associates and friends filled St. Bernard's church this morning as the solemn rites of a Pontifical Mass of Requiem were celebrated at 10:30 o’clock for the Rev. Joseph M. Blais, peace and wartime chaplain who died last Sunday.

The Most Rev. Bryan J. McEntegart, bishop of the Ogdensburg diocese, celebrated the Mass. The Rev. Joseph P. Heslin, pastor of the Church of Saints Peter and Paul of Mineville, preached the sermon.

Tribute was paid to the priest who so courageously had served during World War I as chaplain of the Fourth Infantry, Third Division, and who in peace time had served the church and the people for more than 40 years.

Members of the Fourth Degree Knights of Columbus acted as guard of honor during the Mass and members of the Third Degree maintained an all-night guard last night until the service this morning, Following the Mass the body of the priest was taken to Plattsburg where interment was held in St. Peter’s cemetery. Father Blais had served as chaplain of St. Mary's hospital in Saranac Lake and the New York State Hospital at Ray Brook since 1929.