This photograph was published a third time, with a caption reading "Joseph W. Munn, seaman second class in the U. S. Navy, who is serving on active duty somewhere at sea with the Atlantic fleet. He entered the service in Sept., 1943 and trained at Sampson Naval base and in Virginia. He is the son of Mr. and Mrs. Peter Munn of 13 Winona avenue."
Undated, unidentified clipping in a scrapbook at the Saranac Lake Veteran's Club.Born: June 9, 1925

Services for Joseph Munn Set for Tomorrow at 10 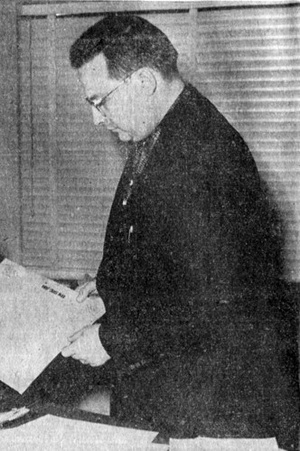 Mr. Munn died suddenly at his home at Lake Flower Avenue about 5:15 Saturday afternoon of a heart attack.

Mayor Frank Ratigan of Saranac Lake said this morning, "Saranac Lake, in losing Joseph Munn, has lost a valuable citizen. His short life was notable for unselfish service to his country' and his home town. I extend my deepest sympathy to Mrs. Munn and his family."

Mr. Munn had not been feeling well for several weeks and had frequently complained of chest pains. Saturday afternoon he was watching the televised baseball game when he suffered especially severe pains. His wife, Mrs. Eleanor Munn, put him to bed and called Dr. Francis B. Trudeau. Dr. Trudeau came and then went back to get the equipment to administer an electro-cardiagram.

Joe Munn died while the test was being given.

The body is at the Keough Chapel of Memories. There will be an American Legion service at the Chapel this evening at 7:30, followed by an Elks Service at 8 and a rosary at 8:30.

Following the funeral mass tomorrow at 10, a military service will be held at St. Bernard's Cemetery at 11. Friends may call at the Chapel from 2 to 4 and from 7 to 10 p.m. today.

Survivors include his wife, the former Eleanor Kaminsky, and three sons, Craig, 10; Joel, 8 and Dean, 2 1/2. Also surviving are his stepmother, Mrs. Beatrice Munn, two half sisters, Miss Margaret Munn and Miss Janet Munn, and a half brother, David Munn.

Joe Munn had been executive secretary of the Chamber of Commerce for about 3 1/2 years, beginning in October 1953, and was best known in the area and throughout the state in that capacity.

He was born in Saranac Lake on June 9, 1925, the son of Ira and Helen Brownell Munn. He went to Saranac Lake schools but joined the United States Navy during his junior year in high school. From 1942 to 1945 he .was stationed at Norfolk, Virginia, and served aboard a cargo ship out of that port.

He returned to Saranac Lake in 1945 and finished high school, graduating in 1947. He joined the staff of the Hotel Saranac as assistant manager, but later accepted a position with the New York State Employment Service.

He then went to work as an insurance agent with the Saranac Lake office of the Prudential Life Insurance Company. In 1951 and 1952 he was steward at the Saranac Lake Elks Lodge 1508. In the spring and summer of 1953, Mr. Munn operated the Blue Bowl Restaurant at Wilmington before coming to the Chamber of Commerce here in October of that year.

Victor Kenyon, president of the Chamber, has called a special meeting of the Board of Directors for this afternoon at 4:30 to determine how to carry through the Chamber's program during the emergency caused by Mr. Munn's death.