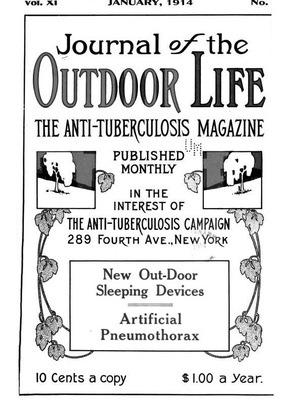 The Journal of the Outdoor Life was a journal primarily aimed at TB patients started by Dr. Lawrason Brown at the Adirondack Cottage Sanitarium in Saranac Lake in 1904 (as The Outdoor Life) to cover matters having to do with the fresh air cure of tuberculosis, "to disseminate related information looking to the prevention and care of tuberculosis". In 1905, "Journal of" was added to the title, and in 1906, it was made an official journal of the National Tuberculosis Association, that Dr. Brown had been instrumental in forming. In 1910, the production of the journal was moved from Saranac Lake to New York City. It ceased publication in 1935. 1

"In 1904 [Dr. Lawrason Brown] published the Journal of the Out-Door Life using it as a vehicle for instruction to the patients and at the same time awakening them to outside interests. He edited it, paying the yearly deficits himself, until it was taken over by the National Tuberculosis Association in 1910." 2

Full text of the Journal for the following years is available through Google books:

The May, 1931, issue was especially devoted to Saranac Lake as a health resort. As a result, it contained an unusual number of advertisements for Saranac Lake cure cottages, many with photos. Cottages that appeared in those ads are designated in our pages with the code JOL1931.