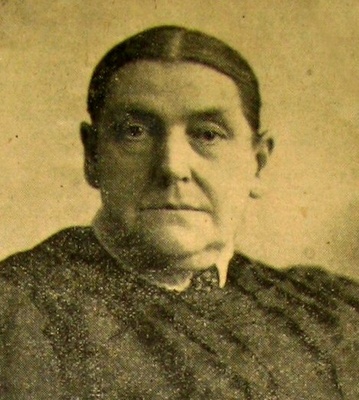 From an unidentified news clipping dated May[?] 1913 in the Adirondack Research Room of the Saranac Lake Free Library Born: February 3, 1833 [or 1834, per cemetery records], in Grafton, Massachusetts, as Julia Baker

Children: Julia Miller bore no children, but became the beloved foster mother of the five (another source says three) children of her late sister Narcissa when she married the widower Ensine Miller in about 1858. They appear to be: Katherine Louise Miller, Helen Narcissa Miller, Marshall Ward Miller; Harry Hilliard Miller, and apparently Mrs. Nellie Bedell.

According to her obituary below, her stepchildren Katherine Louise, Helen Narcissa, and Marshall Ward Miller predeceased her. Another step-daughter, Mrs. Nellie Bedell, lived in Ogdensburgh. Among the grandchildren were three whom Mrs. Miller adopted and who made their home with her. They are Mrs. John K. Beardsley, Miss Margaret [Marguerite?] Locke and Miss Margaret Bedell.

Julia Ann Baker Miller was the first woman superintendent at the Adirondack Cottage Sanitarium, from 1887 to 1904.

Born to Susan and Milote Baker in Grafton, Massachusetts, she came to Saranac Lake with her parents from Ossining, New York, when she was twenty. At twenty-five, she married Ensine Miller; the marriage was childless.

Julia survived Ensine's death in 1877, inheriting his hop farm on the side of Mt. Pisgah along with Sunnyside, completed in 1875. In 1893 she subdivided lower portion of the farm into 83 lots along Margaret and Marshall Streets, and by 1906 prepared a plan for the subdivision of the acreage which makes up part of the Cottage Row Historic District. The land on Baker, Circle and Margaret Streets was surveyed by E. M. Merrill and divided into 30 lots which included all of the lots on Park Avenue from Calvin Brown's land east to Catherine Street (old #53-96 Park Avenue). These lots averaged about 1/3 acre in size. Mrs. Miller gave land for nine streets to the village; Marshall, Catherine, Margaret and Baker streets are named for members of her family. She also gave the land upon which Union Depot was built.

From an unidentified news clipping dated May[?] 1913 in the Adirondack Research Room of the Saranac Lake Free Library

For Sixty Years She Was Identified With Saranac Lake.

Owner of Great Extent of Land in the Early Days of the Village. She Exerted a Strong Influence Upon Saranac Lake's Development—First Woman Superintendent of the Adirondack Cottage Sanitarium— Funeral Sunday.

The loss of another pioneer, this time one of the most public spirited of Saranac Lake's aged citizens, became known in Saranac Lake Friday morning when it was announced that Mrs. Julia A. Miller had died during the night. Mrs. Miller had for sixty years been identified with Saranac Lake, and took a large and active part in the development of the village.

Mrs. Miller is probably best known to the present generation of Saranac Lake people as the first woman superintendent at the Adirondack Cottage Sanitarium. She took the position in and continued as its efficient executive head for seventeen years, laying down the work in because of advancing years.

Julia Ann Baker was born in Grafton, Mass. on February 3 eighty years ago, the daughter of Mr. and Mrs. Milote Baker. She went with her parents to Ossining, N Y., and came to Saranac Lake sixty years ago. She has since made her home here. It was at the age of twenty-five years that she was married to Ensine Miller, a member of another pioneer family.

Mrs. Miller was a woman of exceptional capacity for management, and possessed a fine spirit of public usefulness. The owner of large tracts of land in what is now an important part of Saranac Lake, she deeded to the community without string or hinderance land for nine different streets, and herself bore the expense of laying out these streets. Her property included the present Highland Park and extended across Bloomingdale avenue. Among the streets which she laid out, several bore name of members of her family. Marshall, Katherine, Margaret and Baker streets were among these, and the lower end of Park avenue, Circle street and Depot street were others which she gave to the village. When the New York Central railroad was first proposed for Saranac Lake she gave the land for the Union Station. 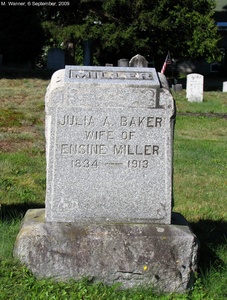 Julia A. Miller's tombstone in Pine Ridge CemeteryThere is no doubt but that Mrs. Miller's life and work had a great influence upon the early beginning and later development of Saranac Lake as a community. Her work at the Adirondack Cottage Sanitarium alone will long be remembered, as will her beneficence there. When she first went to the position she gave freely of her own household furnishings to make surroundings there more comfortable during the early days of the now great institution.

Andrew J. Baker and Mrs. Emma B. Hall of Saranac Lake are brother and sister to Mrs. Miller. Katherine Louise, Helen Narcissa, and Marshall Ward Miller, stepchildren of Mrs. Miller, are dead. Another step-daughter, Mrs. Nellie Bedell, lives in Ogdensburgh. Among the grandchildren are three whom Mrs. Miller adopted and who made their home with her. They are Mrs. John K. Beardsley, Miss Margaret Locke and Miss Margaret Bedell.

The funeral was held Sunday afternoon at 3 o'clock from the late home, 22 Bloomingdale avenue. The services were in charge or Rev. Walter H. Larom and Rev. William Brown Lusk.

Interment was made in the village cemetery.