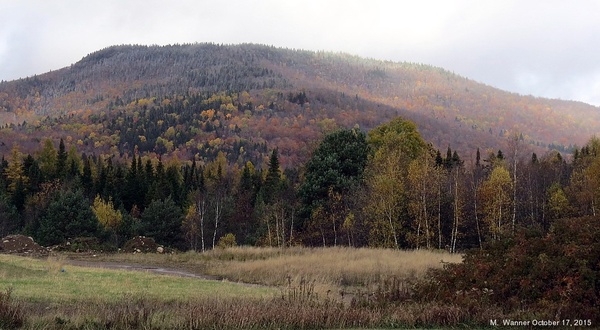 Kate Mountain from the southeast 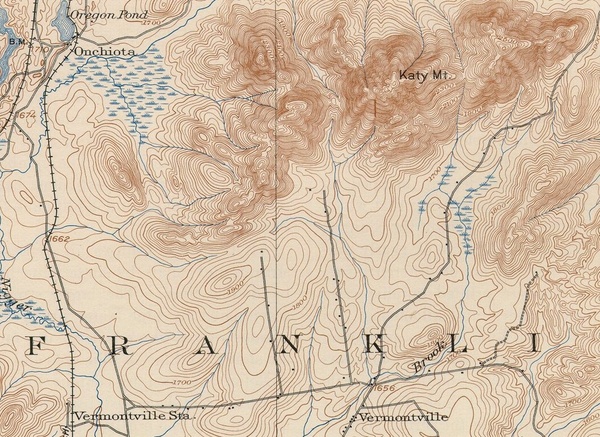 1904 USGS, detail of the Saranac quadrangleKate Mountain (also given as Cate and Katy) is a 2841-foot mountain about two miles north of Vermontville.  It was named for a family named Cate, that settled on its eastern slopes about 1829, according to Barbara McMartin.

A party of six from the Burritt & Eggleston camp ascended Kate mountain a few days ago and camped all night on the summit. Their bonfire blazed up bright and attracted considerable attention among people in this vicinity. The campers enjoyed their trip and are contemplating an excursion to the top of Whiteface mountain soon. The view from Kate mountain is very fine, though very few of our own townspeople have ever enjoyed it.

CATAMOUNT APPEARS NEAR BLOOMINGDALE AND VERMONTVILLE

Adirondack residents of the vicinity of Bloomingdale and Vermontville are exulted over, the appearance the other day of what they believe to be a large catamount and the coincident report from a lumbering camp that a pair of the animals has passed through the woods. A hunt is being organised and it is expected there will be a thrilling chase.

After the catamount had been sighted, Harold Paye of New York, brother of L[eon?] Paye, well known in [Tupper?] Lake as a [?] of his sec[tion?], tracked the animal for two days. He picked up the trail near Kate mountain, in the vicinity of Vermontville, and was able to trace it without difficulty. Once he was close to the animal, but it circled continually and succeeded in keeping out of range.

Mr. Paye found the remains of rabbits which the animal had pounced upon and devoured leisurely. Then it paused for a siesta and a frolic in the snow, the markings of its thrashing tail indicating that it was an animal of more than ordinary size.

Hunters in Bloomingdale at once became interested in the appearance of the animal, and are also organising a hunt. As soon as conditions are favorable for good snowshoeing the party will set out in an effort to pick up the trail.

Catamounts in the Adirondacks have been considered extinct. But they, as well as lynx, have frequently been reported and it has always been believed the animals seen in the Adirondacks crossed from the Canadian wilds to forage in new territory. The region of Vermontville is as wild as any part of the Adirondacks.

Ross Brewster accompanied by his brother Floyd Brewster, while hunting recently found a bear track which they followed until near sundown. They found the animal at his den in the Kate Mountain section. He was shot by Ross Brewster and weighed one hundred and fifty lbs.

VERMONTVILLE, May 5 — Francis Yelle, 15, of this village was found late last night near the foot of Cate mountain. It is believed that she had been wandering about the woods throughout the day.

She disappeared from home early Monday morning after leaving a brief goodbye note to her family. Mrs. Felix Yelle, the girl's mother, immediately reported her disappearance to the state police.

A description of the girl was broadcast throughout the state over the police teletype system.

Believed to have been dissatisfied with having to attend school, no other motive could be discovered for her leaving home.

Tormey Hayden [sic], postmaster at Onchiota, found her wandering about near the foot of Cate mountain late last night and persuaded her to return with him to her home, located about two miles from this village.