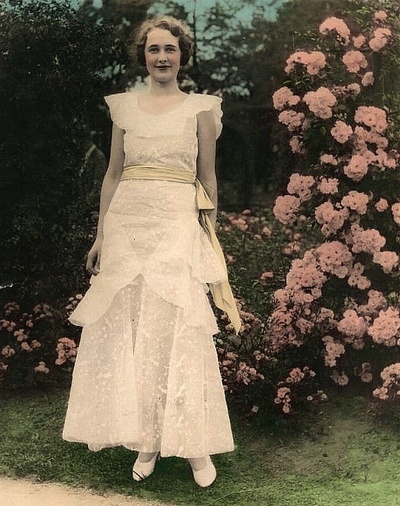 Katherine Hull was the younger of Harry Hull's two daughters. Harry Hull came to Saranac Lake twice seeking treatment for tuberculosis, and Katherine lived in the Riddle Cottage (aka Franklin Manor) with her family. She disappeared on April 2, 1936 at age 22 while visiting her grandmother in Lebanon Springs, New York. Her remains were discovered in the woods near Lebanon Springs in December of 1943.

Throughout the state, as well as elsewhere, careful investigations are carried out to find the 22-year-old girl Katherine Hull, daughter of Mrs. Florence Hull, residing at 743 Lancaster Avenue, who mysteriously disappeared from her grandmother's house in Lebanon Springs. 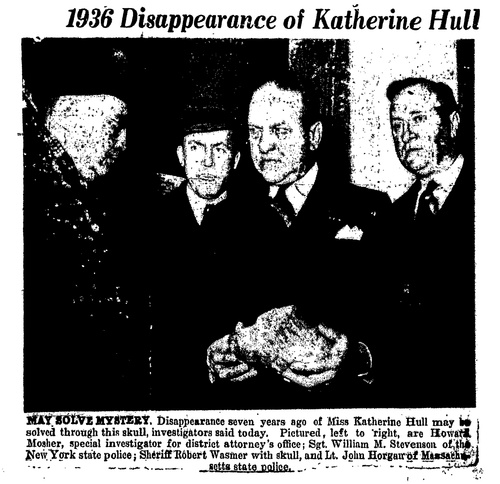 Pittsfield, Mass. -- (AP) -- Discovery of a young woman's skull in the crotch of a tree today reopened an investigation into the mysterious disappearance of Katherine Hull, 22, or Syracuse, N.Y., who was last seen in April, 1936. The skull and hip bone were found by Howard D. Boland while deer hunting yesterday on West Mountain. The skull was discovered at a point about four miles from the place where the Hull girl disappeared seven years ago. Police said that apparently she wandered off while her parents were unloading luggage from their car during a visit to the girl's grandparents. A thorough search of the area was made at the time and a reward of $1,000 was offered for her recovery.

Doubt Skull is That of Missing Girl, 26

Harry Hull of Saranac Lake and Daytona Beach, Fla., father of Katherine Hull, Syracuse girl, who mysteriously disappeared on April 2, 1936, does not believe the skull found on West Mountain a month ago is that of his daughter, friends of Mr. Hull say.

New York state police and Bureau of Criminal Investigation are attempting to identify the skull through dental work. Conflicting claims between the police and dentists in Auburn and Syracuse regarding tentative identification present the latest phase in the mysterious affair. Police claim that tentative identification has been established while Dr. C.B. Atwater of Auburn, and Dr. A.E. Delmonico of Syracuse, claim that they had never seen the Hull girl and had done no work on her.

The young woman who was 24 at the time of her disappearance, lived at Saranac Lake for many years. She attended the village schools and lived there until 1926.

The investigation by the state police led to Saranac Lake when Dr. George L. O'Neil was questioned as to whether or not he had done any dental work for the girl. Dr. O'Neil believes that his brother, the late Fred O'Neil, may have done some work but his records were not available. 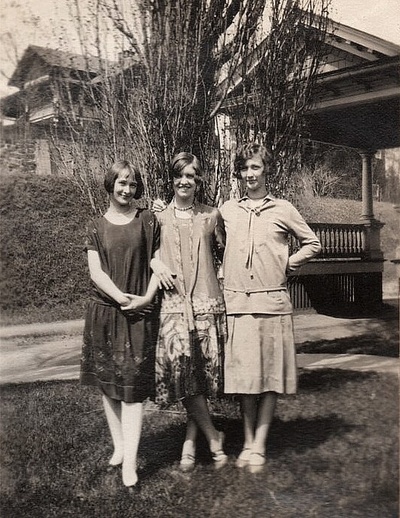 "Me, Chick + Marj" photograph of Katherine Hull, an unknown woman, and Marjorie Hull, undated. Historic Saranac Lake Collection, TCR #385. Courtesy of Kathy Hull.It is also the opinion of the state police that the late Dr. Nelson Johnson might have done work for the girl. Dr. Johnson was murdered in 1953 and his practice was taken over several years later by Dr. Walter Taylor, who practices there now. Dr. Johnson's records were not available.

The young woman's father was village engineer and a prominent citizen in Saranac Lake for many years. After the disappearance of the girl, he advanced the theory that she may have joined an order of Episcopal nuns, a wish that she had expressed on many occasions. This theory, however, could not be traced to a conclusion.

Mr. Hull is said to have expressed the opinion regarding the skull before he left for his Florida residence several weeks ago. Miss Hull disappeared on April 2, 1936, while visiting friends at Lebanon Springs.

A salesman driving in that section is said to have identified pictures of Miss Hull as being those of a girl to whom he gave a ride in the vicinity of Pittsfield. The trail dropped there.

A gold tooth filling which later was covered over by silver has virtually established the identity of the skeleton found on Lebanon Mountain as that of Miss Katharine Hull. According to a story in the Pittsfield Eagle last Saturday the dental charts of the missing girl show this tooth and two fillings. The records of the work done on Miss Hull's teeth are held by Dr. G.B. Atwater of Auburn, N.Y. Another dentist in Syracuse who worked on her teeth in 1928 concurred with Dr. Atwater that this particular tooth is that of the missing girl. 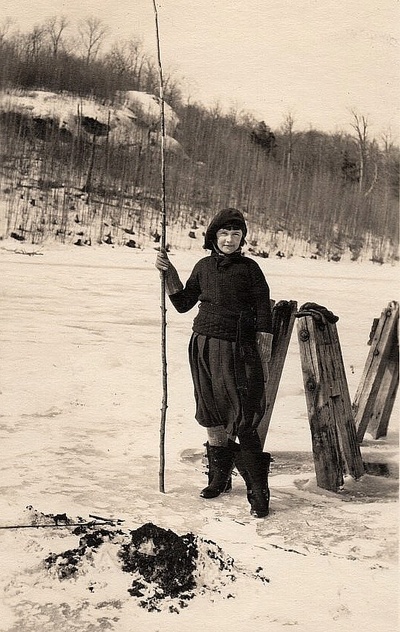 Katherine Hull, undated. Historic Saranac Lake Collection, TCR # 385. Courtesy of Kathy Hull.Miss Hull disappeared from Lebanon Springs on April 3, 1936 and is still listed in police records as missing. The skeleton on the old Lebanon Mountain road section was found about two miles from the home.

The report on the dental charts added that there is little doubt that the skeleton found by hunters last month can be other than that of the missing girl. 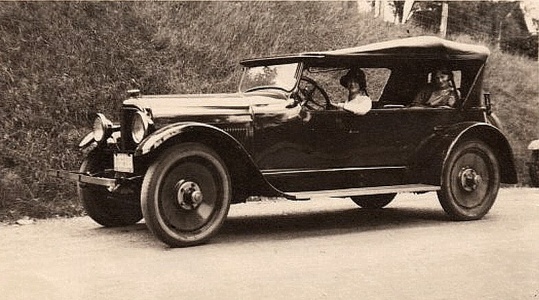