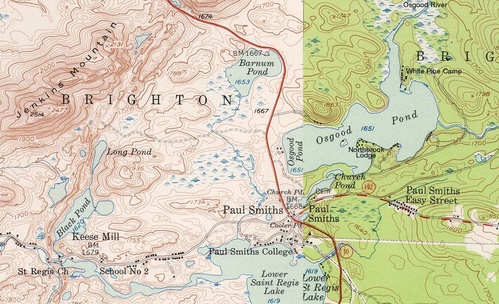 1955 USGS Map of the Paul Smiths Area. Keese Mills is at left. 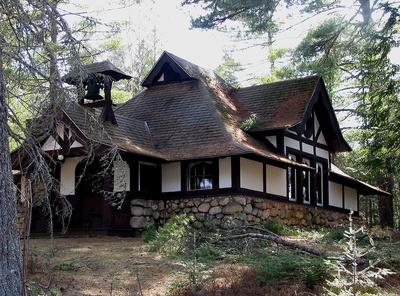 The earliest settlers were Oliver Keese and Thomas A. Tomlinson who built a sawmill there in 1851. 1 The mill was managed by Tom O'Neil. Other settlers followed, including Joshua Otis, John Hall, Henry Hobart, John Redwood, Irving Jacques, Joseph Newell, John Jenkins, and George Skiff.

In 1923, Marjorie Merriweather Post expanded on a previous camp on the esker between the nearby Spectacle Ponds and Upper Saint Regis Lake to create Camp Topridge.

When James M. Wardner was living on nearby Osgood Pond in 1854, there was a general store at Keese Mills. 2 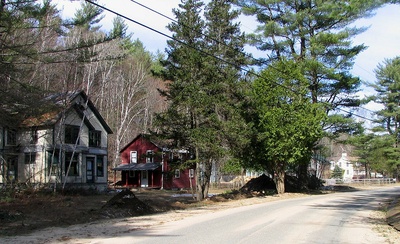 In what in now the town of Brighton the first settlement was made by Oliver Keese and Thomas A. Tomlinson, of Keeseville, in the spring of 1851, according to the recollection of Daniel Redwood, one of the oldest survivors of Keese & Tomlinson's employees. Here they built a dam and mill, at the rapids below the outlet of Follensby's Pond, 3 and embarked in the lumber business. Quite a settlement sprang up at this point, and there are now about 15 families in the vicinity, who live chiefly by farming, the mill having gone to decay, not so much from lack of lumber, as in consequence of the heavy expense of hauling logs up hill, and the long distance from market, about fifty miles.

Keese Mills, March 10th. -- MR. EDITOR—Having business at Brandon (Paul Smith's Station) some two weeks ago, I met Mr. Chas. Young, of your village in the post office, who handed me a copy of The ADIRONDACK NEWS. In looking the same through I find that you have a correspondent in nearly every place of any importance in Franklin county, also some of the adjoining villages of St. Lawrence county are heard from.  I might say for the information of the numerous readers of your spicey [sic] paper, that Keese Mills is located on the coach road leading from Brandon to Paul Smith's being five mile from the former and three miles from the latter named place. We are at the eastern base of St. Regis Mountain, the highest of the Adirondacks in this vicinity, the summit is reached by a trail which enters the forest near the old saw mill.  Before, commencing to climb the mountain proper, Spectacle pond, a beautiful sheet of water (taking its name from the resemblance it has to a pair of spectacles) is passed. The tourist has two and a half miles of a climb from the above named pond before reaching the top of the mountain. On the way up, there are a great many points of interest passed; owe especially, the Dining Room, from which there is a grand view of Paul Smith’s mammoth summer resort, two miles to the east. From this point to the summit there is some hard work for the traveler but when the peak is gained and after taking a look north, east, south and west and seeing the beautiful bodies of water, some forty or fifty without the aid of any magnifying glass, and the numerous hills ranging one above another, the tourist is well paid for the trip.

To return to Keese Mills they were erected some 35 or 40 years ago; the lumber had to be hauled to Plattsburgh, N. Y., the trip and return taking some four or five days. The enterprise proved a failure, owing to the cost of getting the lumber to market, and where everything was life and activity a few years ago there is nothing left now but. the ruins of the old mill and about a dozen old dwellings, which would also have been in ruins, had they not been occupied by families who made it a business of guiding the sportsmen and tourists through these parts of the Adirondacks. John Hall, Joseph Newell and Ben. Montey the pioneering guides here, can tell some thrilling adventures in the way of deer and panther hunting, also of the many long trips they have had through the numerous ponds and lakes and over trails and mountains years ago, when there were very few of the sportsmen from the large cities that visited the North Woods.

From a discussion in the letters to the editor concerning a proposed road:

...Woodsman, I supposed I were acquainted with the principal roads in this vicinity; but, I must confess that I know of no road leading from Vermontville to Brighton, through Oregon. This much I do know— “that after the north Branch State Road proved an entire failure—for the great purpose for which it was made, namely, by which lumber could be more cheaply and easily conveyed to market from Keese's Mills, that the people of Vermontville attempted to direct the travel from Keese's Mills away from Bloomingdale; and hence a scheme for a road from Vermontville to Brighton. But said road has not been opened farther than the point where your proposed Road intersected it.

The reason of the failure of North Branch State Road is—that it was impossible to keep it open during the winter; notwithstanding the great amount of lumber which it was necessary to haul over it…

A petition to the Legislature was presented by Mr. Dustin requesting the Legislature to make townships 13, 14, 16, 17 and 19 in the towns of Dickinson, Brandon and Brighton, a separate highway district, and to direct the highway taxes levied thereon for the next 10 years to be applied towards laying out and constructing a highway from Keese's Mill in Brighton to the Chauncey Merrill place in Dickinson, said moneys to be expended under the direction of Thos. O'NEIL, of Dickinson, Harvey HOLLAND, of Brandon, and Geo. PLUMB of Bangor. The petition was adopted.

The board of supervisors of Franklin county, at its last session, adopted a resolution requesting the passage of an act by the Legislature erecting certain townships in the western part of this county into a separate highway district, and directing the highway taxes levied thereon for the next ten years to be applied toward laying out and constructing a highway from Keese's Mills in Brighton to the Chauncey Merrill hotel in Dickinson. In preferring this request the supervisors asked the Legislature to do what the constitution expressly prohibits. To cover the case, and vest authority for such action somewhere, Mr. BRENNAN has secured the passage of an act, which has been approved by the Governor, permitting the supervisors of counties containing more than 30,000 acres of non-resident land to create such it highway districts as this proposition contemplates. As a consequence, the supervisors will be able next fall to do themselves what they last fall requested of the Legislature if they still remain of desire to have it done.

§ 2. Said commissioners, with the money to be received, or by the work performed in payment of highway taxes in said district, shall lay, out and construct a road from Keese's Mills, in the town of Brighton, near the dwelling house of John Otis, running thence In a north-easterly direction to Wardner's Hotel, at Rainbow Lake, thence in a north-easterly direction down the north branch of the Saranac River to the Goldsmith Mills, (so called), and thence in a north- easterly direction to the Clinton County line, to connect with a proposed road now being constructed from the Clinton County line to the Chateaugay Railroad station at Lyon Mountain.

Comniissioners O'NEIL, WARDNER and EATON, who have charge of the building of the highway from Keese's Mill in Brighton to Merrill's Hotel in Waverly-- the expense of which is met by taxes on non-resident lands in Brighton, Brandon and Waverly have expended a large amount of money during the past season, and have done a good deal of work to show for it. The road is now within half a mile of where the southern terminus of the Northern Adirondack R.R. will be. The railroad as yet lacks four mites of completion to that terminus, but a force of 250 men are carrying it forward as rapidly as possible. This point is within about seven miles of Paul Smith's, so that next season parties may leave New York at six o’clock in the afternoon and dine the next day by one o'clock at this famous Adirondack hostelry. Only two changes of cars, both, convenient, will be necessary in making the journey. The construction of these roads will probably change the entire tide of travel to this section of the Adirondacks.

It is understood that at the proposed terminus of the N. A. R. R., TORRENT & DUCEY, of Muskegon, Mich., who own many thousand acres of well timbered land in the locality will erect a large mill next season and enter upon extensive lumbering operations there. It is reported that TORRENT & DUCEY have disposed of a part interest in this property to two brothers named BACKUS, also residents of Michigan, who will be sharers with them in the enterprise at that point.