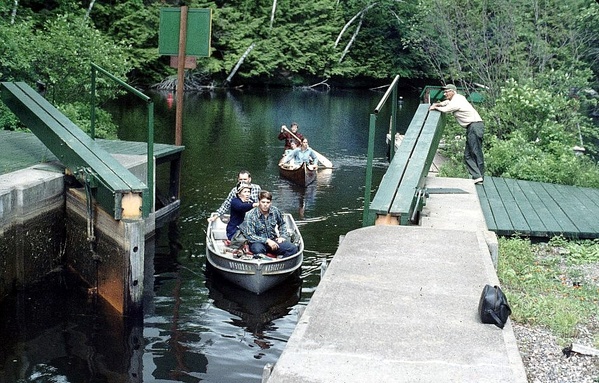 Saranac River - Upper Locks - 1973 - Ken Seymour can be seen resting on the lock arm, while James Monroe Gorgas steers the family's Alumacraft into the lock. James' mother, Margaret Gorgas, and friend, Phil Bailly, are in the boat as well. Born:

Ken Seymour was a lock tender at the upper locks on the Saranac River. In the 1970s, he advertised in the Enterprise as a painting and wallpapering contractor.

The high winds that caused the power failure yesterday also caused some exciting moments for small craft on Middle Saranac. Despite warnings from locks tender Ken Seymour small boats continued to go through from Lower Saranac, which stays reasonably calm, when the while caps were rolling on Middle Saranac. But if you like bull-head, Middle Saranac is the place to go. Three fishermen there Friday night were pulling them in two at a time with double hooked lines. An appreciative letter sent to DEC by Richard K. Gorgas

I was one of those soaking wet kids in the boat mentioned in the letter. I think I was 3 or 4. Ken Seymour made us hot chocolate in his cabin and gave us towels to dry off with. He took us in his boat back down the river to our Tent Platform, first time I was in a boat with a canopy. It was a worse than typical Adirondack thunderstorm. Very intense. He was a gruff guy sometimes, but always very kind to me. As I grew up into my teens, I would go up and help him work the locks, talk about fishing ( he taught me how to fish the spillway behind the locks, how to catch little green frogs for bait) He even let me stay over with him in his cabin so I could get out very early in the morning to fish. I once caught a 48" Northern Pike on Lower Saranac, at about 5:30 am. My brother and I made a bee-line up the river to show him.When I was fifteen, I got a girlfriend. Of course I took her up to the Locks for Ken to meet her. He told me that I'd never do any better, that I should married her. That was almost 40 yrs ago, and we are still together.... never go through the lock without thinking of him.