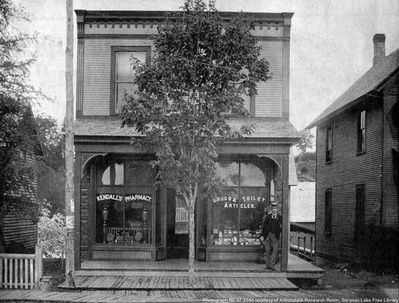 On an unpaved road with wooden walkways, the crisp lines of Kendall's Pharmacy stood out at 82 Main St. (old address), now the southernmost half of the Blue Line Sport Shop. Dr. Frank Kendall was born in Keeseville in 1858, received a medical degree from New York University in 1880, and began practicing in Jay. A few years later he moved to Saranac Lake, where his father, Charles Kendall, ran a grocery, and bought a half-interest in the first pharmacy in the village, owned by F. M. Bull. In 1891, the partnership was dissolved, and Kendall opened his own store. This is likely that building, one of many that redeveloped Saranac Lake's Main Street from a neighborhood of wooden houses to a commercial district. Perhaps the man on the porch is the proud owner. A survey of historic photos reveals that the building was later either encased in brick, or replaced by a brick building, and then transformed again by Wilson's Clothing Company with new facade materials in about 1960.Adirondack Daily Enterprise, May 11, 2013 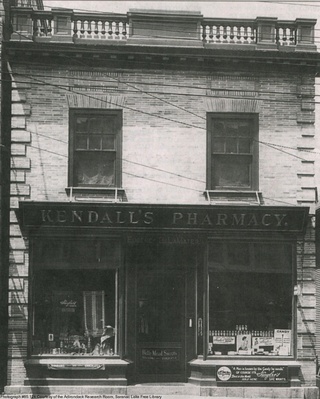 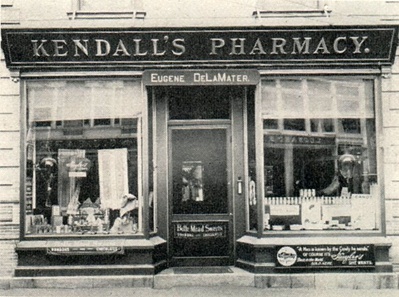 Kendall's Pharmacy (From Saranac Lake in the Adirondacks: The North Woods City of Health and Opportunity, Mid Winter Carnival, 1909. Courtesy of the Adirondack Research Room, Saranac Lake Free Library) Opening in 1888,1Kendall's Pharmacy was the second pharmacy in the village. The first had been opened by F.M. Bull in 1881, who bought the George Washer house, now 18 Main Street, enlarged it, and turned the ground floor into a drug store. In 1888 he sold a half interest in his business to Dr. Frank Kendall and this partnership lasted for three years. In 1891 it was dissolved, and Dr. Kendall opened a store of his own at 82 Main Street, while Edwin J. Booth continued the operation until the mid-1950s. The building was later home to Wilson's Clothing Company, after major renovations, and later, the Blue Line Sport Shop.

It was announced here today that Wilson Clothing Co. has completed negotiations for the purchase of the E. J. Booth property, also known as the Kendall Pharmacy building located on Main Street.

Mr. Walter Duffy, manager of Wilson Clothing Co, in Saranac Lake, stated that extensive renovating and additions are planned for the building prior to moving to the new location. Consistent growth and confidence in the future for Saranac Lake has prompted Wilson's to acquire the store which, after additions, will have more floor space and be a larger store than the present Wilson's store on Broadway.

Mr. Duffy said that upon completion of the new addition and construction of a modern front, Wilson's will be one of the most up-to-date stores of its kind in the North Country.

No date has been set for occupancy.

1. According to an advertisement in the February 1904 Journal of the Outdoor Life.