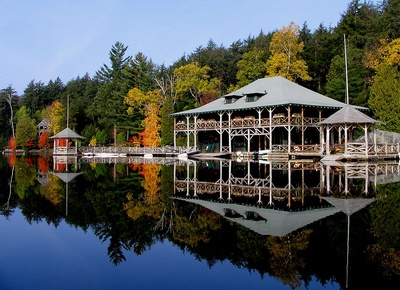 The boathouse at Knollwood. The front of one of the cottages can be seen on the extreme left. 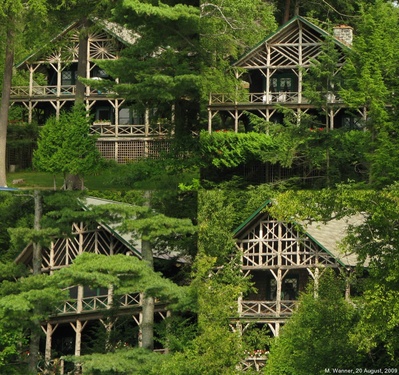 Four of the gable designs 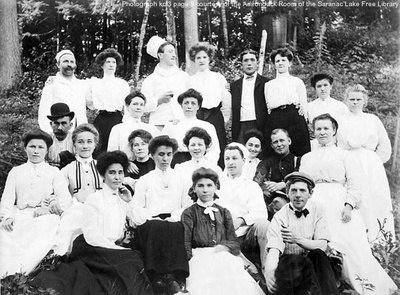 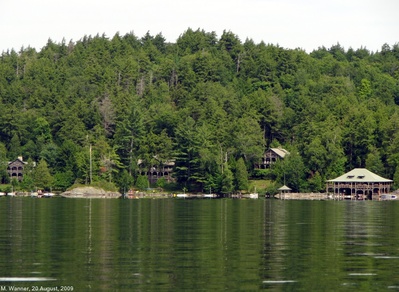 View from Shingle Bay. Three of the six cottages are visible. Knollwood Club is an Adirondack Great Camp on Shingle Bay, Lower Saranac Lake, near the village of Saranac Lake, New York. It was designed in 1899-1900 by William L. Coulter, who had previously created a major addition to Alfred G. Vanderbilt's Sagamore Camp, and built by Branch and Callanan. The "club" consisted of a boathouse, "casino", and six identical two-and-a-half story shingle cottages, which were distinguished by unique twig work facades. Most of the camp complex still stands in largely its original condition on Shingle Bay on the Lower Lake.

The houses were nearly identical except for the log patterns in their front gable screens. The club included several other buildings for common use: a boathouse, a “casino,” where meals were served, and a number of service buildings. The principle buildings were connected by raised plank walkways with log railings with the bark left on. 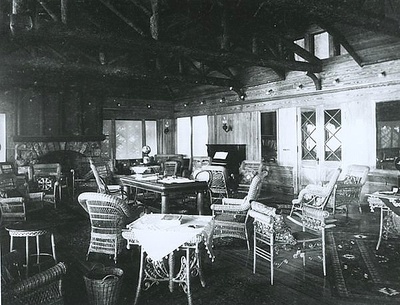 Living room (Casino?) in Knollwood Boathouse, c. 1903
Courtesy of the Adirondack Experience
In the year 1900, Seaver Asbury Miller described Knollwood: "The advantages of Camp Knollwood are unsurpassed by any camp in the Adirondacks, and especially for this arrangement of buildings, as it is in a bay facing the south, protected from high winds, and has shallow as well as deep water and is surrounded by virgin forests. The camp is on an elevation and is well drained. This place affords one of the rare opportunities offered to gentlemen coming to the Adirondacks, and especially the game park, and it is the intention of the owners of this property to stock their ponds with fish and to preserve the trees of the forest." 1

The camp was built for six friends: Louis Marshall; Daniel Guggenheim; George Blumenthal, who made the contract with Coulter; Elias Asiel; Max Nathan; and A.N. Stein. The choice of Lower Saranac Lake as the site was determined in part by the growing antisemitism in America in that period. In 1877, Joseph Seligman was involved in the most publicized antisemitic incident in American history up to that point, being denied entry into the Grand Union Hotel in Saratoga Springs, New York. After that, antisemitism became more overt, and Jews were excluded from other resorts, most notably at the Lake Placid Club. In reaction, Jews built their own retreats on some of the large tracts of land then opening for sale in the Adirondacks. William West Durant owned much of the land bordering the Saranac Lakes, and was more than willing to sell to any and all buyers. Thus many of the Great Camps and cottages on the Saranac Lakes were built by wealthy Jewish families.

Bob Marshall, the wilderness activist, and George Marshall, the conservationist, spent the summers of their youth there, and — guided by Herb Clark — they initiated climbing the 46 highest peaks in the Adirondacks. 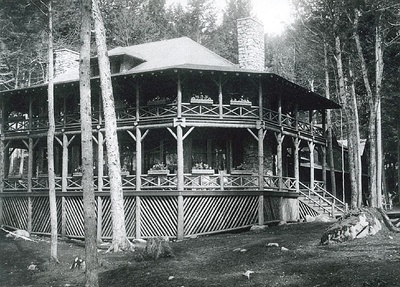 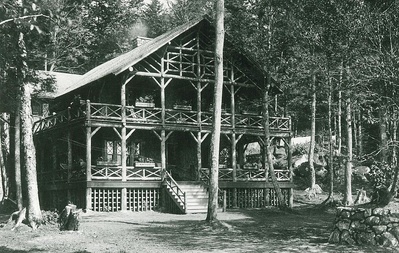 One of the six cottages, c. 1903
Courtesy of the Adirondack Experience
Dr. Theodore Meyer had relations to the Asiel family and is said to have been the one to recommend Saranac Lake for the TB Cure.

Albert Einstein was a frequent summer visitor; he was at Knollwood on August 6, 1945 when he heard on the radio that that atom bomb had been dropped on Hiroshima, and it was at Knollwood that he gave his first interview after the event, on August 11. 2   The interview was arranged by the Knollwood superintendent, Joe Walsh. [New York Times, August 12, 1945]

…One of the fine camps recently built is that known as camp “Knollwood,” situated on the western shore of the lower Saranac Lake. The property in the vicinity of each of the Saranacs is very valuable compared to Adirondack property generally.

The Knollwood camp is the property of six New York bankers and brokers. This preserve contains 350 acres and is protected from fire from adjoining property by a fire land 200 feel wide extending around the entire property. They have constructed two miles of fine roads, put in a reservoir supplied with water from mountain springs, have a trout pond and eight or ten acres of good trout brook; a beautifully laid out tennis and croquet grounds, right in the dense woods overlooking the lake, and a perfect sand beach for bathing.

There are six cottages, each 40x50 feet square, which have a large living room 20x30 feet, the living rooms in each cottage being finished differently... 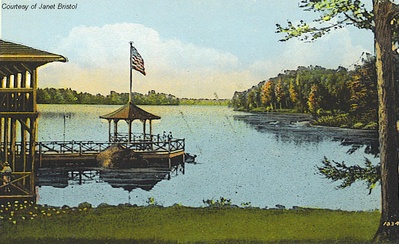 The 2 1/2-story structure, built in 1900, was owned by Mrs. David Sulzberger and contained many Indian paintings and valuable antique furniture. 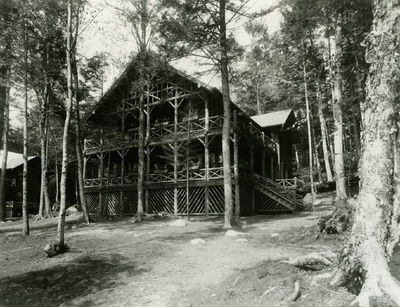 Another cottage, c. 1899
Courtesy of the Adirondack Experience
The fire was discovered shortly after 2:30 a.m. by two maids who were closing the cottage for the season. The Saranac Lake Fire Department was notified at 2:49 a.m. and responded with 22 men and five trucks.

Firemen said the large camp was "totally involved" when they arrived. The firemen fought the blaze for the remainder of the night, using portable pumps to draw water from the lake. The trucks returned to the station at 6:35 a.m., but several men remained to watch over the smoldering ruins.

Bernard Van Cour, the caretaker of Knollwood, said flames were coming up the staircase and shooting out the roof when he arrived. Van Cour said he entered the basement of the structure with a garden hose, but was unable to quench the blaze.

Two 500-gallon propane tanks attached to the structure did not explode. Firemen said the safety valves on the tasks melted allowing the gas to escape and burn in the air rather than in the tank.

Although the camp was a total loss, firemen were able to contain the blaze. A second cottage less than thirty feet from the fire sustained no damage and very few trees surrounding the structure were burned. Van Cour said Mrs. Sulzberger left Knollwood yesterday. The two maids were to close the house and leave today.

Firemen said they do not know how the blaze started.

Knollwood is a private club established as a summer resort at the turn of century by several prominent New York families. The remaining buildings at the club include five opulent Adirondack-style cottages and a boathouse. Among the famous guests who have enjoyed the pleasures of summering at Knollwood was Albert Einstein.

Van Cour said the fire was "a great loss." He said it would be impossible to replace the cottage or the artifacts it had held.

Van Cour also praised the efforts of the firemen. "They did a beautiful job," he said. "They worked hard to save the other cottage and keep the woods from catching on fire." 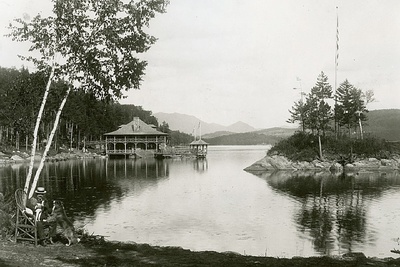 SARANAC LAKE—The famous Knollwood Club was founded at the turn of the century by six wealthy New York City business and professional families. The opulent Adirondack-style group of camps were built in 1900 by Branch and Callanan.

The main lodge, which had overlooked Lower Saranac Lake, was owned by Mrs. David Sulzberger. 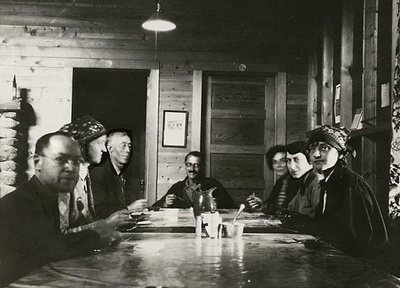 A group of people sitting around a table at Knollwood Club.
Herb Clark is third from the left.
Courtesy of Adirondack Experience
Families which are members of the club include heirs to the Bloomingdale department stores. The Marshall family, which produced Robert and George Marshall, the first men to scale the Adirondack high peaks, were also original members of the club.

Among the guests over the years at Knollwood were Albert Einstein and Cy C. Sulzberger [sic, C. L. Sulzberger], foreign correspondent for the New York Times. Francis Magnus [sic, Frances Magnes], a famous concert violinist, was also a summer visitor.

Also a frequent visitor to the camp was R. Peter Straus and his wife Ellen Sulzberger, 3 Mrs. Sulzberger's daughter. Chairman of Straus Broadcasting in New York City, Straus had served as head of the Voice of America during the Carter administration. Their daughter Jeanne Straus worked at the Adirondack Daily Enterprise for three summers.

...A few months ago a party of six New York capitalists purchased of Mr. Straus 350 acres along the Lower Saranac, and are now erecting cottages the total cost of which will reach $1,000,000. The place is called "Camp Knollwood,” and is owned by George Blumenthal, E. Asiel, Max Nathan, Louis Marshall, David Guggenheim, and A. N. Stein. It is protected from fire from adjoining property by a fire-lane, 200-feet wide, extending around the entire preserve. The syndicate has constructed two miles of fine roads, put in a reservoir supplied with water from mountain springs, and it owns a trout pond and a good trout-brook.  It also has beautifully laid out tennis and croquet grounds in the dense woods overlooking the lake, and along the shore is a perfect sand-beach for bathing.

There are six cottages, each 40x50 feet square, with a living-room, 20x30 feet. Some these rooms are finished in grass-matting and some in burlap, and a few in natural woods, all having ceilings of logs supporting the second story. There are six bedrooms and two bathrooms to each cottage, and each has a covered piazza on each floor, 10 feet in width. The Casino building is 40x60 feet, and the chef’s department extends 150 feet in the rear of this building. The dining-room of the Casino seats sixty-eight people, and the room directly over it is to be used as a general club-room. There are also ten guests’ rooms in this building. The guide-house is back from the camp about 1,000 feet, and has a capacity for fifty persons. The laundry department is provided with machinery. There are a carpenter's shop, and a complete electric-light plant. The boat-house, 60x80 feet, has docks flanking each side, 150 feet apart. The boat-house is to accommodate twenty-two boats and two large launches. It has a general club-room on the second floor, 40x60 feet. All the buildings are connected by walks, eight feet wide, and lighted by electric lights.  The grounds and buildings are protected from fire by a complete system of hydrants. 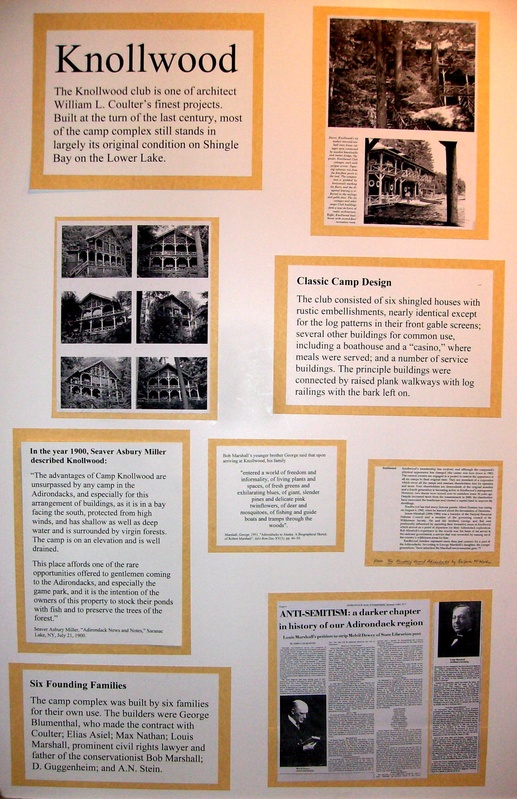 Knollwood Display by Amy Catania and Mary Hotaling, shown at History Day 2008. Click on the image to enlarge the display

Bob Marshall wrote: "In the spring of 1906 Ed Cagle, who had guided for our family at Lower Saranac for six years, decided to open a livery stable." He is pictured with Louis Marshall and an impressive string of fish on page ix of Bob Marshall in the Adirondacks by Phil Brown.

A random list of some of the help at Knollwood, Rockledge and Idlepoint 4:

June, 1918, from correspondence (see Herb Clark): Kate and Mary, two Irish-American sisters, who worked for the Marshalls as cook and maid.

As of August 2018, Mike Price remembers the guides as: Cottage 1, Bernie Barber; Cottage 2, Clint MacDougall; Cottage 3, Carl Poser, who may have come to Saranac Lake as a TB patient; Cottage 4, John Moody; Cottage 5, Ed Cagle for 6 years, then Herb Clark.

1. Asbury Miller, Seaver “Adirondack News and Notes,” Saranac Lake, NY, July 21, 1900.
2. Taylor, Robert, America's Magic Mountain, Boston: Houghton Mifflin, 1986. ISBN 0-395-37905-9
3. As she was Mrs. Sulzberger's daughter, Ellen Sulzberger was not a visitor, she was a summer resident at Knollwood
4. From labels on glass plate negatives in Owen Young Library, St. Lawrence University
5. Based in part on the recollections of David Marshall Billikopf