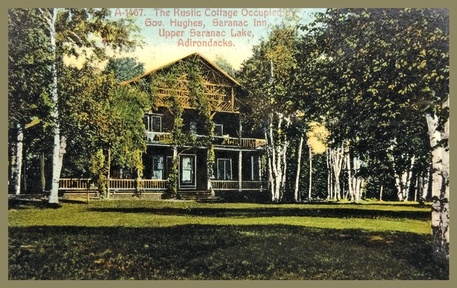 Historic Post Card, courtesy of Chris CohanLady Tree Lodge is the name of a cottage at Saranac Inn. It was shown on a 1912 map of Upper Saranac Lake as cottage number 12, the farthest away from the Inn in a row of seven cottages.

It appears to have been built about 1896 and used by Colonel Alfred H. Belo of Texas, who called it Lone Star lodge or camp.

In 2016, following extensive restoration by landscape architect Chris Cohan and his wife, architect Rita Wong, their work was recognized by Adirondack Architectural Heritage.

A chronology based on items from the Brooklyn Eagle: 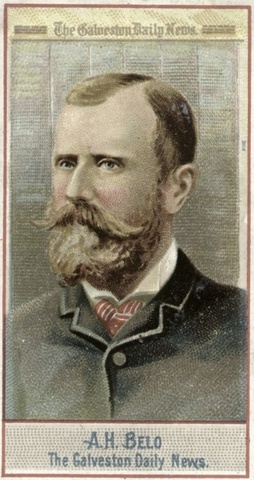 9/5/1909 – “A dinner given by Governor Hughes and Mrs. Charles E. Hughes at Rustic Camp to….. NOTE- first time we observe Rustic Camp capitalized.

After Colonel Belo died April 19, 1901 his wife and daughter continued to summer at Upper Saranac Lake though they no longer stayed at Lone Star. They stayed at another cottage located at end of point south of the Saranac Inn, known as The Wigwam.  It is close to adjacent Thomas Blagden’s property where Grover Cleveland honeymooned in 1886. 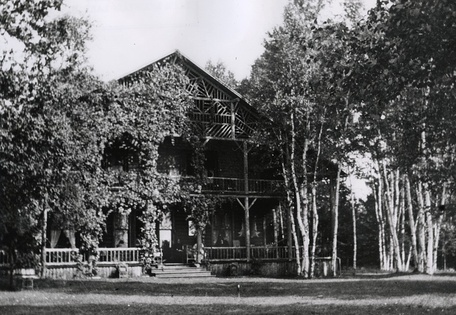 Current co-owner Chris Cohan writes: "We believe this image dates from early 1900s when the house was known as Lone Star Cottage occupied by the A. H. Belo family.  They occupied the house starting summer 1897 right after house construction was finished.  Brooklyn Eagle, 6/20/1897….Cottage built for Belo; 7/18/1897…Belo and family “are at Colonel Belo’s new cottage “Lone Star.”

Note the log facing instead of lattice at base of porch; angle braces on porch first floor posts and amount of ivy on screen and railing. These architectural details and ivy are gone in later images. Based upon the time it would take for the ivy to grow and cover the screen as shown, we believe this image would be from early 1900s. 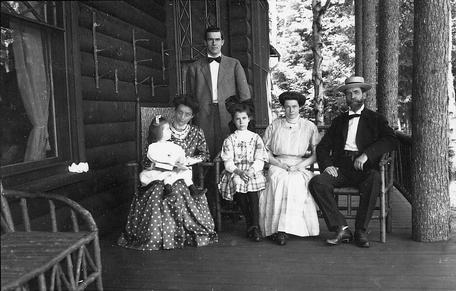 Col. and Mrs. A. H. Belo, of Texas, arrived recently and are occupying the new Cottage Lone Star that has been built for them here.

Sarana Inn, N Y . June 20—Governor Hughes will arrive on Monday with the, members of his family to spend the summer at Saranac Inn. It is expected he will occupy the Belo Cabin, a rustic camp, situated near the waters of the Upper Saranac Lake. It enjoys a certain degree of seclusion and privacy, as it is surrounded by the woodland and is at the end of the walk or drive.

Governor Hughes hopes to get quiet and rest here planning for his active campaign in connection with the national elections later in the summer.

GOVERNOR HUGHES IS TAKING A VACATION

SARANAC INN, June 30.—With the arrival here yesterday of Governor Hughes, this place, on the shores of Upper Saranac Lake, becomes the summer capital of New York State. 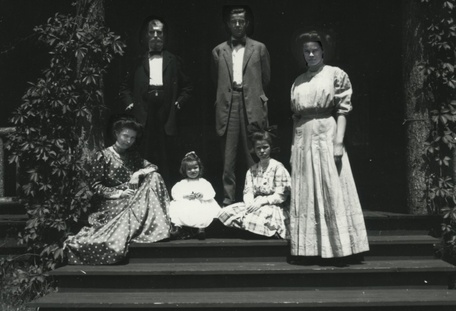 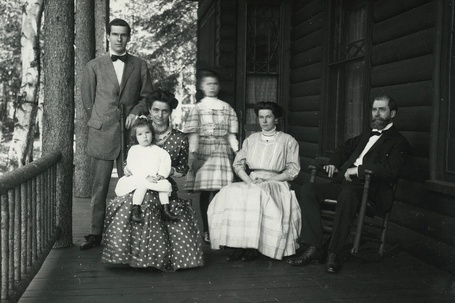 With the Governor, who came up on the train leaving Albany at 11:30 o'clock this morning and arriving here at 6:10 p.m. were Mrs. Hughes, their son, Charles E. Hughes, jr., their two daughters. Helen and Catherine; baby Elizabeth and nurse. Mrs. Hughe's [sic] maid. M. B. Sylvester, who will act as secretary and stenographer to the Governor, and M. B. Smith, his private messenger.

The Governor and the members of the family were taken to Rustic Cabin, the pretty cottage located near the Inn, which they will occupy for three months.

Governor Charles E. Hughes, who, with his family, is spending the season at Saranac Inn, is daily making trips to the neighboring trout pools. Governor Hughes has made some especially good catches in Hoel Pond and Green Pond.

...The honors for long distance motoring to Saranac Inn go, however, to Russell Alger 3d, son of Mr. and Mrs. Russell Alger of Detroit, who this season have the Belo cottage at Saranac Inn. The young man, who is a motorcycle enthusiast, drove his machine the entire distance from Detroit and is now making a series of day trips to points of Interest about the region. Mr. and Mrs. Alger also are by their daughter, Miss Fay Alger, and their grandson, Henry Chaney. Jr. Mr. Alger has placed in commission on the lake a new 40 foot speed boat. 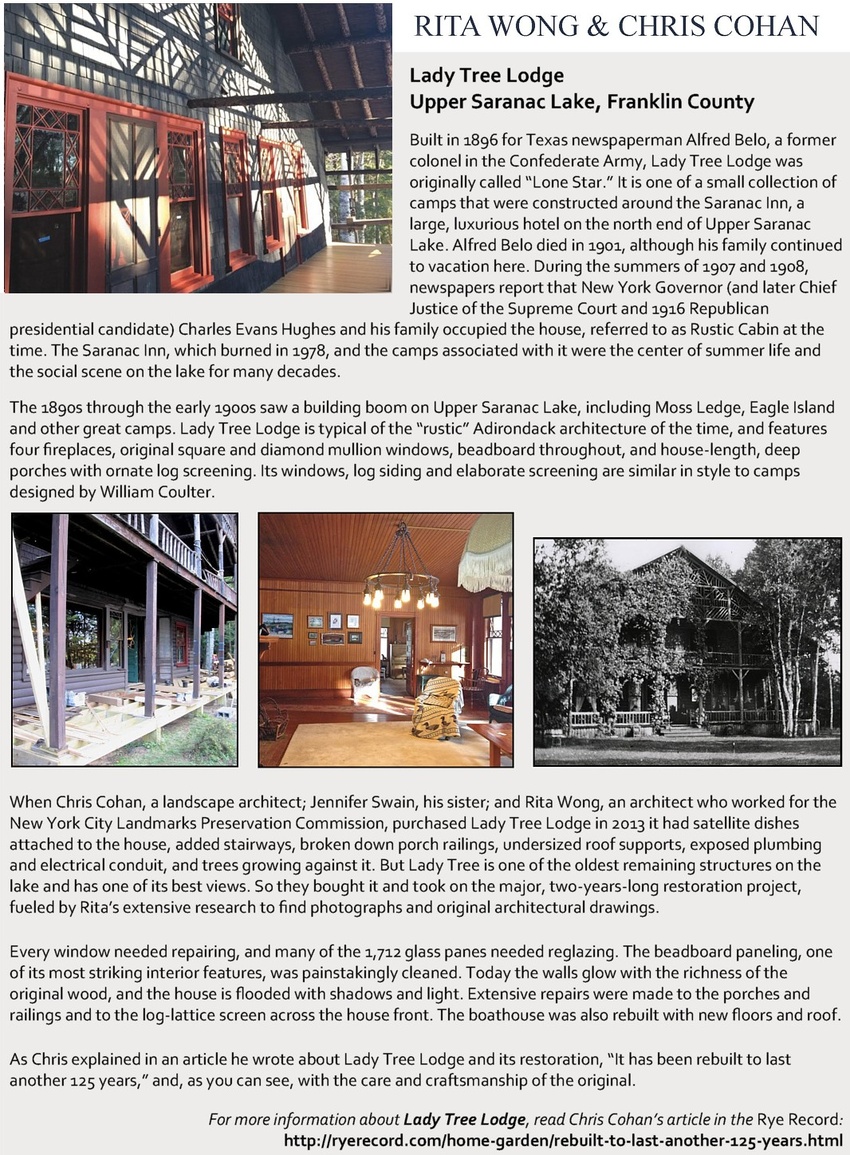 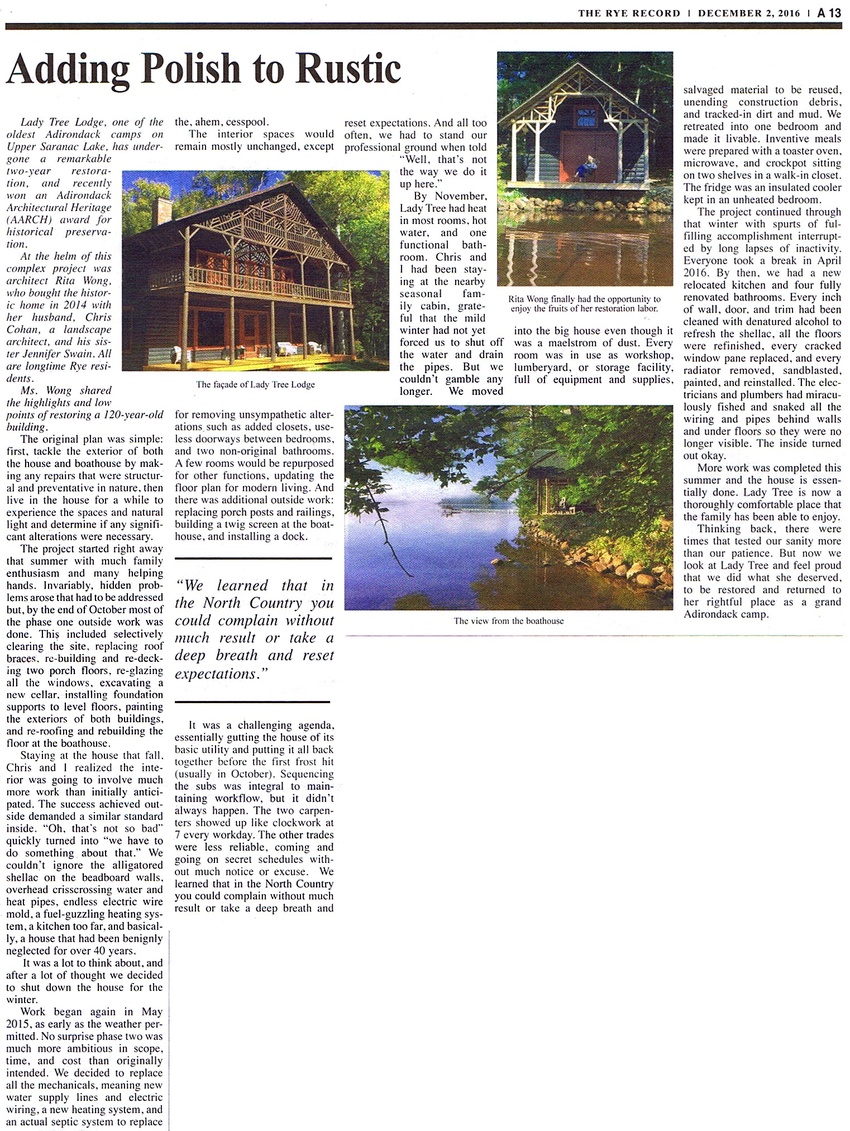 The Hunch, 40-foot speed boat owned by Russell Alger, jr., of Detroit, who this season occupies the Belo cottage at Saranac Inn, has demonstrated its speed in trials on the lake, and among the owners of fast craft there is much speculation as to what the outcome of the August tournament races will be.

… Panther Point, the Upper Saranac Lake camp of Dr. L. Emmett Holt, of New York, has been purchased by Mr. James Elliott, of Pelham, N. Y., who, with his family, is this season occupying Lady Tree cottage at Saranac Inn. Mr. Elliott will improve the Panther Point place and take possession next season. It is now occupied by Mr. and Mrs. J. S. Pettit, of New York, who are remaining late into September…

...Frederick Altemus of Washington, named as an associate of the group of new owners of Saranac Inn, is here with his family passing the summer at Lady Tree Lodge, their summer home on the shore of the Upper Saranac Lake... [For the complete article, see Saranac Inn.]

The bridegroom is the son of Mr. and Mrs. Peacock Jr. of Menands.

Lady Tree Lodge was built in the 1890’s during the golden age of Adirondack great camps. It is one of the oldest remaining structures on Upper Saranac Lake. Until recently, it was virtually hidden from view. The surrounding woods grew unchecked for over 50 years with evergreens close to and against the house. The waterfront became overgrown making the house almost invisible from the lake. Open spaces and a roadway were lost to second growth timber. Lady Tree was painted Adirondack brown camouflaging its presence in the forested setting. Together, all this caused it to disappear from public view for half a century.

Rita A. Wong is an architect and one of the owners coordinated the just completed two-year long restoration. Rita researched the house history at the Adirondack Museum to assist and inspire her plans for a careful and true restoration. At the museum, she uncovered architectural drawings by William L. Coulter who designed some of the finest Adirondack Great Camps. He is recognized for his significant influence on the development of the Rustic Camp Style for which the Adirondack region is known. Lady Tree is a classic example of the Adirondack Rustic style.

Rita noticed that Lady Tree has many details that are Coulter trademarks. For instance, the lake facing façade has one of, if not, the largest and most ornate screens in the Adirondacks which he is known for. Also, when comparing Lady Tree to Moss Ledge (1898) Coulter’s earliest known lakefront Adirondack commissions there are many similarities. This is significant as Lady Tree may be an unconfirmed Coulter design or inspiration for his first confirmed commission just down the Lake at Moss Ledge. 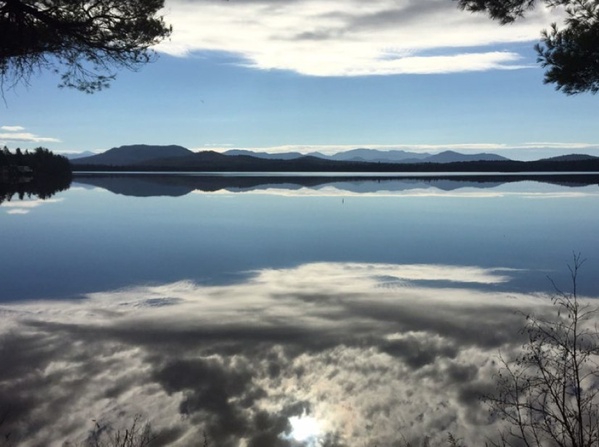 View across the lake from Lady Tree Lodge
Courtesy of Chris CohanOriginally, known as Lone Star Camp, it was built for A.H. Belo, a Confederate Colonel. After the war, he rode horseback to Texas where he founded the A.H. Belo Corporation, a major media company traded on the NYSE. His newspapers became a standard of excellence for others to emulate. Adolph Ochs, said “I received my ideas and ideals for a clean, honest, high-class newspaper from the late Colonel A. H. Belo…I have put those ideas into effect at The New York Times.” Belo was a confidant of President Cleveland who called him, “A chivalrous, high-minded man, and an exceptionally able, fearless and conscientious journalist.”

Governor Hughes is said to have run New York State from the front porch. Afterwards, he ran for president against Woodrow Wilson, barely losing. Later, Hughes became one the most distinguished Chief Justices of the U.S. Supreme Court. He was recognized as a man of utmost character and a true statesman in a sea of petty politicians. 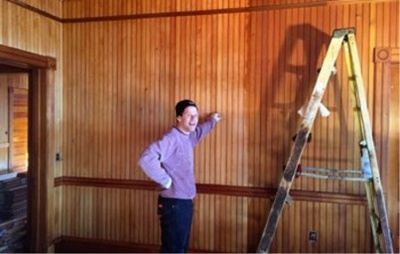 Wall surfaces, before and after.
Courtesy of Chris CohanThe house has 46 true divided light windows with 34 panes of glass each and 6 doors with similar pane detailing. Together, there are 1780 panes, but who’s counting. Then every window’s screen was removed, scraped, primed, painted and rescreened. All window frames were opened to replace every sash cord. Some window panes were cracked and needed replacement. Now when the sun shines through the old glass it casts shadows defined by a series of diamond, square and triangle shapes across the floors.

During the early part of the last century, Lady Tree was electrified using exposed conduit that ran indiscriminately across walls and over ceilings. Also, a heating and plumbing system with exposed pipes running hither and yon was insensitively installed. It was a difficult project to relocate all exposed utilities behind walls and under floors. This arduous project celebrated the original charm of bead board walls while restoring the home interior.

The entire house interior is finished with clear spruce bead board on walls and ceilings. Many decades of neglect left the wood dulled and darkened, the grain poorly visible, and covered in rough alligator finish. They were carefully cleaned. Today, the century old walls glow with a warm richness that highlights the grain.

Much has changed around Lady Tree Lodge and the lake over the past 125 years. However, the captivating beauty of this vast wilderness filled with high mountain peaks, clear lakes, fresh invigorating air and abundant wildlife has not. The Forever Wild policy guarantees the view from Lady Tree across the lake, will not change over the next 125 years or ever.