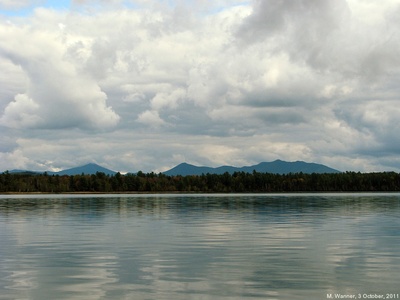 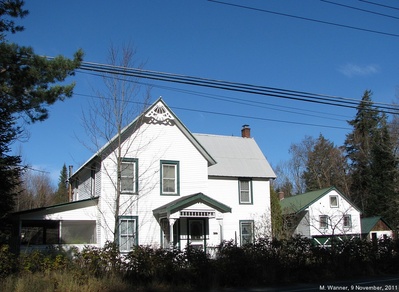 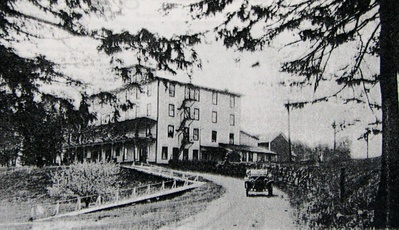 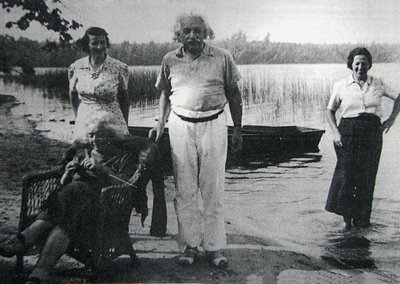 Lake Clear is a hamlet and a lake in Franklin County. The area is named for 940-acre Lake Clear, part of the original Seven Carries canoe route. New York Route 30 is the principal route through the hamlet. The lake was originally called Big Clear Pond, to distinguish it from Little Clear Pond.

Many of the area's great camps and cottages are still in use, along with other guest facilities. The nearby St. Regis Canoe Area is a major draw for paddlers. The state now owns much of the land, including most of the shoreline of Lake Clear, and it operates a Fish Hatchery at nearby Little Clear Pond.

The Adirondack Regional Airport, owned and operated by the Town of Harrietstown, is 1.5 miles east of Lake Clear; although it is nominally in Saranac Lake (though not within Village boundaries), it is known locally as the "Lake Clear Airport." 12

George H. Carley, Sr. ran a general store in Lake Clear, and was its first postmaster and mail carrier. The Lake Clear Inn has operated since 1912.  The village was also the site of the Montvue Hotel

A. Judd Northrup, like so many of the early writers, felt that his sojourn in the Adirondack wilderness was worthy material for a book. In 1880, he published "Camps and Tramps in the Adirondacks," a compilation of his personal experiences during a summer vacation. He opened the narrative with the advice that "nothing will set you right like a good time in the North Woods." His first good time was encountered at West Canada Creek where rainy weather and a necessary smudge to hold off a punkie assault served as a rather rough introduction to the North Woods.

Following a "squirrel trail," Northrup and his party finally arrived at their destination on Jock's Lake, where a bark-roofed shanty provided shelter for their first campsite. A trout breakfast revived their flagging spirits and, that night, a successful jackhunt provided venison for the larder. The stay at Jock's Lake was a typical adventure repeated many times at various locations throughout the forest and lake region which, in the 1870s, still had a wilderness flavor.

Subsequent to the original outing, Northrup, in July, was heading south from Malone to reach Fuller's on Meacham Lake for more hunting and fishing. Upon reaching the bottom of the flour barrel he joined a party of guests heading for Paul Smiths. He found the hotel at St. Regis to be a far cry from Jock's Lake. In addition to; the material amenities and the physical comforts, there were real live ladies in the parlor and on the piazza!

After a pleasant stay at Paul's, Northrup decided to travel by guideboat to Martin's on Lower Saranac Lake. Rowing through Lower St. Regis, Spitfire, and Upper St. Regis Lakes he came to the first carry. Known as the St. Germain or "Sangemo" carry it ran from the landing at the southern tip of Upper St. Regis to the northern shore of Big Clear Pond. Here dwelt the St. Germain family, where father and sons operated a horse-drawn sled to draw boats and luggage over the carry. As a sideline, the elder St. Germain sold "pop-beer" to the tourists.

Crossing Big Clear Pond with some members of another party and a guide, the group arrived at the south shore where another carry led to Upper Saranac Lake. Here at the landing, Northrup noted, only two or three houses in the midst of a, small clearing. After several loud "halloos" by the guide a man with a team of horses appeared to cart the boats over the four-mile carry to Saranac Inn. Although Northrup departed with this conveyance, we will remain at Big Clear Pond.

This designation appeared on David Burr's 1839 map of Franklin County and it remained Big Clear Pond in the Stoddard and Wallace guide books prior to the turn of the century. In 1892, the railroad arrived and a junction was formed where the spur to Saranac Lake and Lake Placid shunted from the main line. Perhaps "Big-Clear-Pond-Junction" was just too much of a mouthful but, in any event, the name was reduced to Lake Clear and it has been plain Lake Clear ever since.

In 1906, Paul Smith built an electric railway connecting Lake Clear to his hotel on Lower St. Regis, thus creating another junction at the Lake Clear station. The combined traffic of the two R.R. lines apparently lent an impetus to the growing community and a gradual prosperity evolved. There had been lumbering in the area, even prior to Northrup's visit, when Christopher Norton, "the lumber king of the Saranacs," was busily cutting along the lake's west shore between Big Clear and Little Clear Ponds. The Upper Saranac Association, which owned Saranac Inn, built a dam on Big Clear Pond's outlet, which created a mill pond to operate a sawmill and, later, a hydropowered electric generator to bring electricity to the Inn,

The burgeoning colony of summer camps on the St. Regis chain of lakes brought a welcome boost to the economy of the settlement at Lake Clear. Fred Jarvis ran a stage coach-boat trip from, the Junction to a tour of the lakes which listed the viewing of a total of 50 camp's enroute. The round-trip fare for eight miles of stage-coach riding plus 18 miles of waterway was a modest $2. Food and sundry camp supplies also, meant additional income to Lake Clear merchants due to their proximity to the same 50 camps owned by wealthy patrons. Matt Otis, proprietor of Lake Clear's general store, advertised "Chicago dressed beef, native lamb, veal, and poultry, fresh eggs, butter, milk and cream, along with fish and game in season." Free delivery was offered to all camps.

The first public house on Lake Clear was Joe Baker's on the northeast shore. Baker also ran a carry between his place and Upper St. Regis Landing. The hotel changed hands several times over the year with varying degrees of, success and a few name changes. In 1906 it was called Rice's-on-Lake-Clear with Mrs. L.H. Rice, proprietress (no one with pulmonary disease need apply). In 1911, Charles Wardner purchased the property from Rice and it became Wardner's Inn. A remarkable feat was accomplished by Wardner, who formerly leased Rustic Lodge from the Swensons on the southern end of Upper Saranac Lake. When he made his move, he decided to take his cottages with him. During the winter he loaded the seven cabins on horse-drawn sleighs and drew them across the nine miles of ice on Upper Saranac and four miles overland to Lake Clear. The final name for the place was Lake Clear Inn and, although the main building was torn down, the cottages remain in private individual ownership.

Another public house on the west shore was called The Portage and it was operated as a tea room with "exceptional facilities for special luncheons, dinners, and bridge parties" by Helen Conley, until the building burned down. Across the road from the R.R. station was the Junction House run by Solomon LaBounty. Later it became Buckley's Hotel and, presently, is Charlie's Inn.

There were also several boarding houses which prospered under James Gilmett, B.F. Carpenter and Theodore Spear. The extra housing at that time was probably needed because of the many workers employed in nearby occupations. At the Junction there were such R.R. men as station agents, freight agents, section crews, conductors, and engineers. There was the tree nursery, sawmill, and the State Fish Hatchery. Milo Otis was foreman at the hatchery, Charles Holdridge ran the sawmill, and C.R. Pettis was state forester.

The tree nursery has disappeared but the fish hatchery is still in business on the outlet of Little Clear Pond. The railroads are long gone but transportation has taken on new life with the Adirondack Regional Airport which, by the way, is currently making news headlines. The DEC headquarters between Lake Clear and Saranac Inn has grown considerably in both personnel and equipment. The famous Lake Clear wobbler that was invented and manufactured by Harold Robare in Lake Clear is now being turned out in Gilbertsville.

The lake trout, which this popular lure once attracted, have also departed the area, along with the once prolific whitefish. Today it would be quite difficult to locate either the St. Germain or Joe Baker carry. Both of these ancient routes have been displaced by the currently popular "Seven Carries" between Paul Smiths and Saranac Inn which bypasses Lake Clear in favor of Little Clear Pond.

Should A. Judd Northrup be able to cross Big Clear Pond once again he would certainly be surprised to see how the "two or three houses in a clearing" have blossomed into a thriving community, with nowhere to go but up.

It is reported that PAUL SMITH has purchased from the Mutual Life Ins. Co. a tract of 20,000 acres of land about Big Clear Pond—-including the pond itself, which is a beautiful sheet of water—and many parties are already applying to him for sites for cottages there.

The busy little railroad and fishing town of Lake Clear, above Tupper Lake, on the main line of the New York Central, is enjoying a little real estate boom of its own. During the last few days several important properties have changed hands.

James Buckley has purchased the Junction House, known to hundreds of travelers on the Utica-Montreal run of the New York Central.

Fred Jarvis has purchased from Millard F. Otis the boarding house and farm which Otis has conducted on the lake for thirty years. Jarvis has begun a pulpwood lumbering contract.

A. I. Vosburgh, one of the prominent men of the vicinity of Lake Clear, said today a busy season was expected on the lake this summer. He said he did not believe the present warm weather will continue, as there is always snow in March and April and the weather of the two months is uncertain.

We've got to wait for some time yet," he said, "before the farmers can start operations for the summer and before the recreation seekers begin to come this way."

One of the largest brook trout ever taken, from Adirondack waters was captured in Lake Clear by Theodore V. Speer, an expert angler. Mr. Speer was using an angle worm as bait and a No. 1 sproat hook trailed behind a No. 2 pearl spoon. The big trout gave battle, and it took some minutes for the angler to conquer it. The trout, a speckled beauty, was twenty-two inches in length and weighed four pounds and nine ounces.

The [Franklin County] Board of Supervisors

An act has been passed creating a separate highway district in Brighton and Harrietstown. Its purpose is to secure the opening of a road from Paul Smith's, passing the shores of Big Clear Pond, and joining the present highway leading from Harrietstown to Saranac Inn. The new road will shorten the distance between Paul Smith's and Saranac Inn by seven or eight miles and also make access to Big Clear Pond easier. 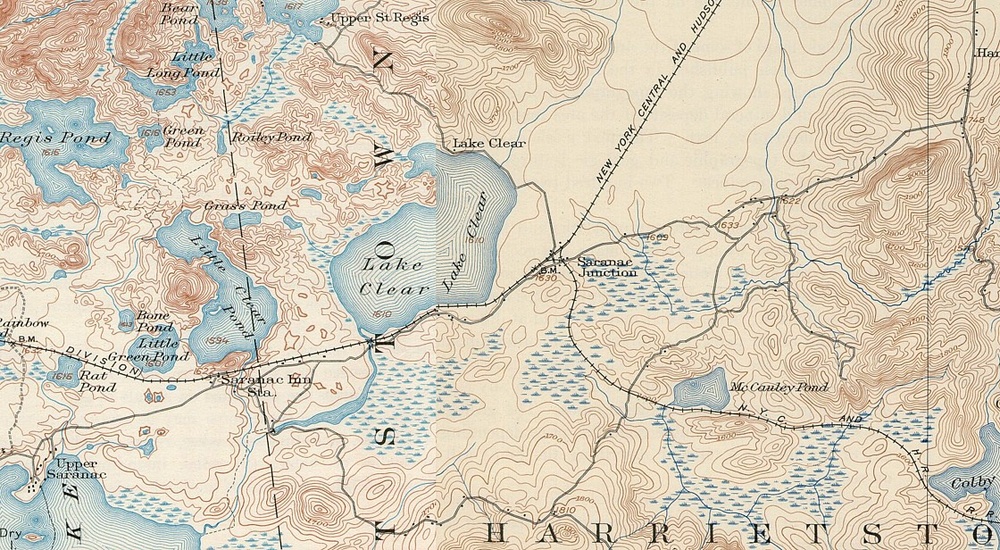 1. http://www.wnbz.com/December%202006/121806.htm WBNZ News - "Chamber to Help in Marketing Lake Clear Airport"
2. This article appeared originally on Wikipedia as Lake Clear, New York; its edit history there reflects its authorship. It is licensed under the GDFL.