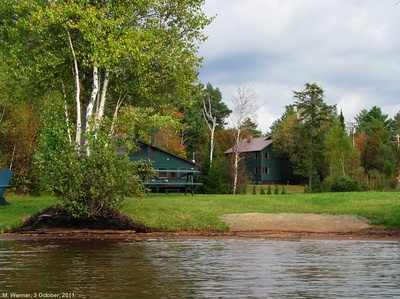 The property shown in the photograph has been owned and operated for many years by the Ernest Hohmeyer families (both father and son) as the Lodge on Lake Clear.

Hohmeyer's Lake Clear Lodge is celebrating 40 years in business the month of May. There were several other people who built the lodge and had a business there. The lodge house and red barn were built in 1886, by Millard and Anna Otis, who happen to be Cathy Hohmeyer's great-uncle and -aunt. They ran it as a boarding house, trading post and carriage stop for people going from the Lake Clear Junction to Saranac Inn. Ernest said that he found an old basket of receipts in the attic that were all signed by Millard Otis, who had a post office from 1887 to 1893 at the lodge.

Fred and Julelia Jarvis [sic]1 lived in downtown Lake Clear Junction and they had a livery business. They bought the lodge in the 1920s, moving there livery business to the red barn. They turned the lodge into a true inn with meals for their guests. They owned more than 100 acres from the lake to way across the main road that was built in the 1930s. Up until then the road was at the back of the lodge running alongside the railroad tracks. It's still visible today.

The Jarvis's built nine cabins, some down at the lake. Fred died in 1955. Julelia stayed there for a couple more years. She sold all the cabins at the lake privately to several people. Across from the main road went to the state. She lived in the lodge, keeping that until she left and passed away. Four days before Christmas in 1965, Ernest (Sr.) and Elsbeth Hohmeyer purchased the lodge.

It's the usual story. They had been vacationing in the Adirondacks for years with their three children and just happened to be driving by and saw the for sale sign. The rest is history. So, while Ernest Sr. stayed down state, Elsbeth, her two daughters and Ernest Jr. moved into a large home that was supposed to be winterized and had not been lived in for ten years. But they managed, got the lodge winterized, and on May 28, Ernest Sr.'s birthday, opened for business as The Lodge, serving meals to the public. The first meals that were served were five-course meals that cost $5.50 Wow! ...

Ernest Sr. passed away in 2001. Elsbeth winters in Florida. Ernest (Jr.) and Cathy Hohmeyer have taken over the business and are carrying on...

See also: Lake Clear Inn, which was located on the other side of the lake.

1. Eulalia Jarvis is listed as the licensee on a June 9, 1955 liquor license notice in the Adirondack Daily Enterprise"