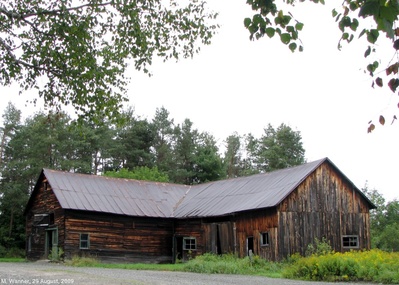 Tierney Barns on Lake Colby Drive The Lake Colby Dairy and Produce Farm was a farm near Lake Colby that became the site of the Adirondack Medical Center.

By September 2011, the house and barns were torn down and a new building — a wound-care center for the Adirondack Medical Center — has been built on the site.

That valuable piece of real estate where the Adirondack Medical Center is located was still just a vacant lot in 1900 - as happened in so many instances with the Irish emigrants who settled in Alder Brook, town of Franklin, and also settled much of Saranac Lake.

That vacant lot of 25 acres on Lake Colby was owned by William O'Neil back at the turn of the last century, and the grandparents of Matthew, Martin, Robert and Frederick Winderl,   John and Ellen Davey Tierney, wanted to get to a more populated area of the Adirondacks and purchased that land from Mr. O'Neil for $3,200.

I thought that maybe the land ran right down to the shores of Lake Colby in 1900, but I believe that the Delaware & Hudson Railroad (the D&H) line was already running along the shores of Lake Colby. In about 1875 the Adirondack Railroad connected with the D&H line from Albany to Montreal, and of course, Lake Colby Drive was the location of that RR line. I know the line was still operating in the late 1930s because we used to go from our farm on Norman Ridge to the old D&H freight house on the Bloomingdale flats to pick up fertilizer and other farm supplies.

Well, John Tierney, who was born at Alder Brook on May 19, 1859, later met and married Ellen Davey who was born up the road just a piece in Wilmington, and only a few months before him, on New Year's Day, 1959.

When the Tierneys bought the land to build their farm, which became known as the Lake Colby Dairy and Produce Farm, they had four children. By the time they had built the house and barns (which still stand today on the old Lake Colby Road), they had their fifth child. John Joseph Tierney, born in 1901 (and died in 1960.)

The other children were Martin David Tierney, 1884-1915, age 31; Michael Walter Tierney, 1893-1945, age 45; Elizabeth Frances Tierney Whetzel, 1899-1979, age 80: and Eleanor Argenta Tierney Winderl, 1897-1943, age 45 (Martin's mother). She met and married Matthew Winderl, a mason, about 1926, after he had moved to Saranac Lake from Winooski. Vermont. They had three other sons, Robert and Frederick and Matthew, who died at a young age. Mr. Winderl's brother William, also a mason, had moved here earlier from Vermont, built that beautiful stucco house on the old Lake Colby Road (later owned by the Wendell Fuller family) and then convinced his brother to move here. William also owned a bar on Broadway called the Rathskeller, which later became the famous Dew Drop Inn, owned by Forrest and Sheila O'Reilly Morgan.

In 1961 the Latour family donated the land to the Adirondack Medical Center, reserving the house and barns with a parcel of land. Faust and Kate Latour Sturdy then moved to the farm, which was subsequently sold to Guy and Linda Leaper. (The hospital opened in 1967.)

The Leapers sold the property to Tom and Linda Cushman in 1970, and in 2007 the Cushmans sold the property to the Medical Center, for probably 10 or 12 times what the Latours paid in 1923. If one is really curious about any real estate transaction, it is all a matter of public record, filed with the county.

Martin told me that after his grandparents sold the farm, they paid $500 for a headstone and burial plot in the Pine Ridge Cemetery and put the rest of the money in the bank. He said they died broke after they lost all they had in the crash of 1929.

Mrs. Winderl was a teacher, and since there was no work here, she and Mr. Winderl moved to Washington, D.C., where she and her sister both taught school and Mr. Winderl worked there in his trade. Martin was born in Washington. They later moved back to Saranac Lake where Robert and Frederick were born.