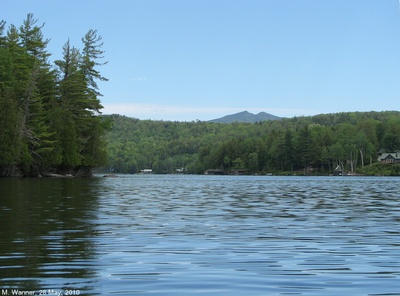 Lake Kiwassa - McKenzie Mountain is visible above the trees, and Kiwassa's one island is at the left 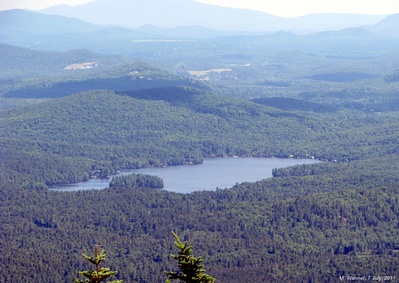 Lake Kiwassa, originally Lonesome Pond, is a 280-acre lake, south of Dewey Mountain, between Lower Saranac Lake and Oseetah Lake, two miles southwest of the village of Saranac Lake. It drains into Lake Oseetah, and thence into the Saranac River.

Sher-Min-Don lately organized, and members have purchased Lake Kiwassa and begun the erection of rustic buildings which will serve as individual camps for club members. The new camp gets its name from a combination of the names of the three promoters, who are S. S. Sherwood of Paterson, N.J., and William Marshall and A. L. Donaldson of Saranac Lake. Four new buildings have been put up this spring and a new highway has been opened through the forest. Captain Fred Kendall of Cleveland, Ohio, and Colonel Smith of St. Louis also have camps on the lake. 1

1. The names of the promoters don't quite fit the name of their organization. Our thanks to Sally Svenson for locating this clipping.