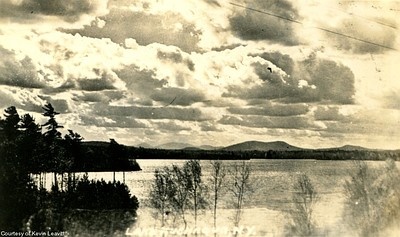 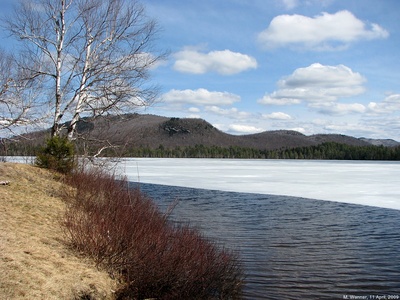 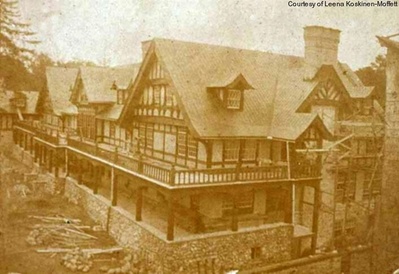 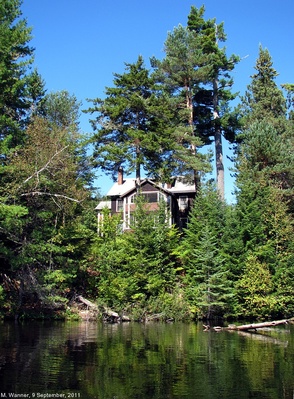 The other cottage on the lake 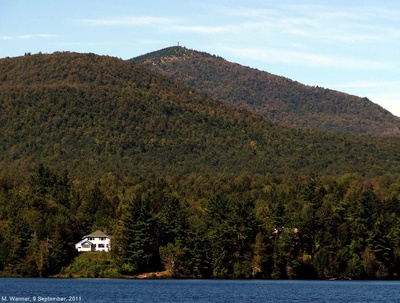 One of the two inholdings on Lake Kushaqua, with Loon Lake Mountain (?) and its fire tower, behind. The second cottage is just visible through the trees at right. The Stony Wold chapel is 800 feet to the left of the white cottage. 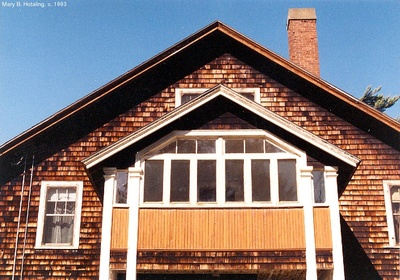 Detail of the cottage above, taken 18 years earlier, from the opposite side of the house. Lake Kushaqua is a 375-acre lake near Loon Lake and Rainbow Lake in the town of Franklin; it is on the North Branch of the Saranac River. The north end of Lake Kushaqua flows under a metal deck bridge on Kushaqua-Mud Pond Road and exits over the Lake Kushaqua dam, morphing back into the North Branch of the Saranac River and flowing toward Mud Pond and beyond. The dam is owned by the Rainbow Lake Water Protection District. In 2018 the 14-foot high dam was raised 2.5 to 3.5 feet to better prepare it to withstand a 100-year flood.

The shoreline is state owned except for two small in-holdings.

The New York State Department of Environmental Conservation operates a campground on Kushaqua and nearby Buck Pond.

The pond was originally called Round Pond; the name seems to have changed when the Lake Kushaqua Hotel was built, in 1893, by Arthur Leonard and Frank Smith, one of the first hotels in the Adirondacks with electric lighting. It was accessible via the Chateaugay Railroad and the Adirondack Division of the New York Central Railroad, which passed the lake on either side.  The developers were associates of railroading brothers W. Seward Webb and H. Walter Webb.

In 1901, the Stony Wold Sanatorium was built on 1800 acres bordering the lake.

The rail bed of the Delaware and Hudson line runs along the eastern shore of the lake, past the Buck Pond campground, and that of the Adirondack Division of the New York Central Railroad runs along the western shore past the remaining buildings of Stony Wold: the beautiful chapel and two cottages on the lake shore. When it was built, the 1200-acre sanatorium property included all of Lake Kushaqua and nearby Buck Pond, purchased in 1901 for $20,000. When the sanatorium closed in the 1950s, it was given to the White Fathers of Africa; they sold it to the state in 1970, after which the huge main building, laundry and power plant were destroyed. 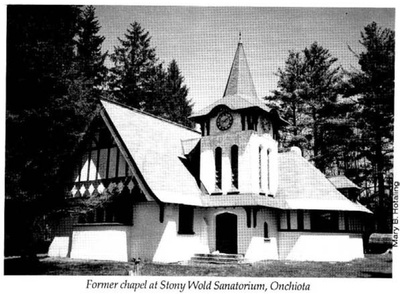 When the state purchased the Santanoni Preserve, it took over 20 years to resolve the dilemma of what to do with the significant buildings on the property. NYS's Historic Preservation Act requires that determination be made of the historical and architectural significance of any property the state plans to acquire. If OPRHP declares it eligible for the State Register of Historic Places, then Environmental Conservation Law Section 9-0109 all but prohibits state purchase.

While the problem of Santanoni is being successfully resolved, and AARCH has been working to prevent the same problem from recurring when the state makes new land purchases, there are certain other buildings within the Forest Preserve which seem not to have been evaluated for historic or architectural significance at the time the properties were acquired. Some of these buildings have been leased to others by DEC for a term of years, or the previous owner may have retained an interest. At the end of the term of these agreements, the buildings, some of which we believe to be eligible for the State and National Registers, are scheduled to be demolished. These situations usually only come to public attention at the time the leases are up, as happened with the last camp on Valcour Island in the fall of 1991. We call these "time bombs."

AARCH is aware of several buildings in this situation. The chapel and some cottages at the former Stony Wold Sanatorium (later called the White Fathers and later still Camp Lavigerie) on Lake Kushaqua in the Town of Franklin, Franklin County, have only about four years before their leases are up. Debar Park Lodge in the Town of Duane, Franklin County, has about 12 years. There may be more. The time to evaluate these buildings for their significance is long before the leases are up. We ask the help of AARCH members and friends to let us know of similar situations with other potentially historic buildings in the Forest Preserve.

Walter Hooey completed a pulp wood drive, consisting of about 7,000 cords, on Saturday, for the International Paper Co. The drive started from Lake Kushaqua about a month ago.