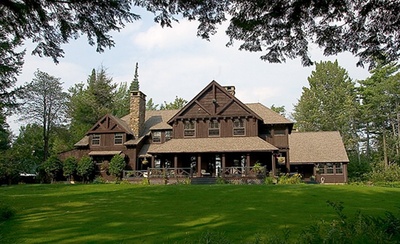 Land's End was built at the northern end of Upper Saranac Lake for Donald and Wilhelmina Du Pont Ross by Benjamin Blagden; the seventeen acre site was largely a swamp, and had to be drained and filled, and the foundation for the large house took over two months to build. In 1964, the Rosses gave the property to the Presbyterian Church, to use as an educational center. (This must have been when the Rosses moved to Ross Park, across the Azure Mountain Road from Bay Pond.)

In the 1990s, the property was bought by Dr. Scott and Susan Yeaw, who operated it as a bed and breakfast. Bruce Shapiro, who developed the Dewey Mountain subdivision off Lake Street at Mulflur Road in Saranac Lake, later owned it until it was sold to Thomas L. Kalaris for $2.4 million in 2009.  The present owner is listed as White Birch Ridge LLC.

WHAT IS LANDS END?

Dear Editor:
Tucked away in the pines surrounding a large chunk of Upper Saranac Lake is Lands End, a place to find out about yourself, commune with nature, and, after a week, go home with what feels like an old fashioned spring tonic, purging all the garbage out of mind and body.

Formerly owned by the Ross-duPont family, Lands End, a huge mountain estate with fireplaces you can walk into standing up, was given as a gift to the Northern Synod of the Presbyterian Church in 1965.

Under the direction of Newton Fink, whose year 'round residence is on the grounds, groups of 12 to 24 meet most every week throughout the year to find out what makes them tick, and what to do about the tick if it is not ticking properly. And, there lies the expertise of Newt Fink, a professional in the art of human behaviour.

A slim, informal six-feet, with steel gray hair and as glib as an Alan King, 62 year-old Fink plays with his classes like puppets, and makes them like every minute. It is an unusual experience to say the least. Some classmates become frustrated and even angry over his repartee which can be as sharp as a razor's edge.

For instance, someone says, "I've got a problem."

Fink says, "What do you want to do about it?"

“What kind of help do you want?" asks Fink. "Do you want us to prescribe for you — talk about it?"

And eventually the person finds out he must act on his own, make his own decision, be responsible for his own actions. You wind up in a cold sweat, and feeling like maybe you can hack it after all if you stand up for your own rights as a member of society.

After a week's session, three times a day, and Mr. and Mrs. Ben Darling's home cooking and caretaking, if you do not have a new, bright, handle on life, you had better seek the help of a shrink, or an eye or ear doctor, because it seems utterly impossible to walk away from Lands End without a new, exciting meaning for your existence. Cost is $250.

And the atmosphere up here and the people are both conducive to open mindedness.

The giant of a man at your post office welcomed and helped me mail an important package; the librarian pleasantly Xeroxed my copies; Mrs. Lewis at Marine Midland cashed a personal check from a total stranger and said, "I'll know you the next time." The jovial pro at Saranac Golf Club gave me his clubs and a glove to play his beautiful course. Lastly the FAA people at your airport and Jack Finegan, manager, and his staff treated this reporter like a human being. Thank you Saranac Lake!

Editor's note: Mr. Bolles is a U.S.-Canada journalist, and he says he and his family knew and loved this area back in 1929-30.