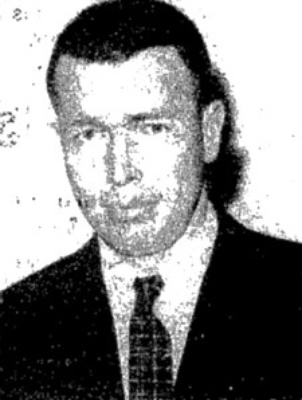 Undated, unidentified clipping in a scrapbook at the Saranac Lake Veteran's Club.Born: July 25, 1924 in Saranac Lake, a son of Ambrose McKillip and Bernice Garey

Lawrence R. McKillip was an Olympic bobsledder; he finished seventh with Jim Lamy in the 1964 Olympics in Innsbruck, Austria.  He was a World War II veteran.

Larry McKillip, also Democratic candidate for village trustee, is a native of Saranac Lake. He is a veteran of the U.S. Army and the holder of the Bronze Star medal. Mr. McKillip served as president of the Saranac Lake Democratic Club this last year. He is employed as yard manager for Gendron Lumber Co.

INNSBRUCK, Austria, (AP)— The International Bobsled Federation has decided to stage the first of four runs in the Olympic four-man event early Wednesday.

The bobbers have been plagued by warm weather that melted parts of the run. At one time there were 10 inches of water on the track.

But a deep freeze Monday night hardened the track and the bobbers were able to practice Tuesday. Times were slow.

They preferred to take it easy rather than risk their necks on a track changed by the weather. An official of the bobsled Federation said the first run would be staged at 2 a.m. EST. That's the same time as the tobogganing finals for pairs will be staged on a near-by track.

"If the bob track holds up two runs will be held Wednesday and the remaining two on Thursday. If it is possible to have only one run tomorrow then the remaining three will be scheduled for Friday and Saturday," the official said.

The United States No. 2 bob piloted by Larry McKillip of Saranac Lake, N.Y., will be the first away, followed by Britain's No. 2 bob driven by Walter McCowen.

Faces In The Crowd

Mr. McKillip was a reknowned bobsledder who held Mt. Van Hoevenberg speed records for the two-man and four-man sleds in the 1950s and 1960s.

He was born July 25, 1924 in Saranac Lake, the son of Ambrose and Bernice (Geary) McKillip.

He was a veteran of World War II, serving in the Army's 10th Mountain Division. A longtime resident of Saranac Lake, he was a partner in Gendron Lumber Co. here from 1958 to 1968. He worked for Wicks Lumber Co. in Reno, Nev., from 1968 until his retirement in 1984.

He was a member and past Exalted Ruler of Saranac Lake Elks Lodge 1508. He was also a member of the local posts of the American Legion Veterans of Foreign Wars.

Those wishing to remember Mr. McKillip may make donations to the Elks Scholarship Fund or the American Cancer Society in care of the funeral home.