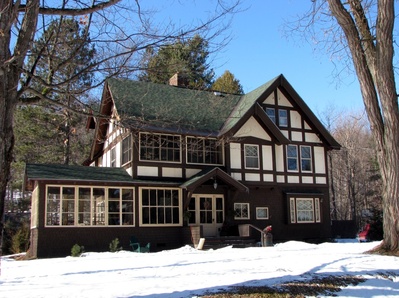 Architect: William L. Coulter for Frank L. Creesy, a TB patient, a lawyer and a business partner of Coulter and George V. W. Duryee, his neighbor across the street.

Other information: A Tudor Revival-style house built in 1900. Essex County records show a deed to Frank L. Creesy from Ezra and Catherine A. McClellan recorded on 9/21/1899. 1 A second deed was recorded on 4/9/1900 for Frank L. Creesy of St. Armand and Susan R. Creesy of the same place, with frontage on Park Avenue and Grove Street, "together with the buildings now being erected upon said lot." 2 The 1902-03 Adirondack Directory lists "Creesy, Frank L., lawyer, Park Ave. and Grove Street."

Dr. Lawrason Brown, who became the medical director of the Trudeau Sanatorium, moved to the house in 1902; previously he may have lived in the Resident Physician's Cottage at the sanitarium. In 1907, he moved to 115 Main Street. Brown developed and refined the outdoor sleeping cure porch, and his house contains just such a porch. The reference above to the "Dr. Brown Cottage" in 1913 may indicate that he continued to own the Park Avenue house, but rented it to patients after he moved to Main Street.

Dr. John M. Packard wrote the following about his childhood in this house; another version was published in Adirondack Life in the spring of 2010.

My father, Edward N. (Ned) Packard, Jr., M.D. was one of those patients taking the night train to Saranac in 1912. He had graduated from Syracuse University Medical School in 1909 and was a member of AOA. During the third year of his pathology residency at St. Luke’s Hospital in New York, he was out bowling with friends and coughed up blood. On returning to the hospital he produced more sputum, studied it under the microscope, and saw the telltale red acid-fast bacilli of tuberculosis. Up to Saranac he went and placed himself under the care of Dr. Lawrason Brown, one of Dr. Trudeau’s assistants. In due time, with bed rest and a good diet, he regained his health and became Dr. Brown’s assistant, using a horse and buggy for transportation. He was one of the many doctors who “cured” at Saranac and stayed to treat others after their recovery.

Dad was a 1st Lieutenant in the Army Medical Reserve Corps and was initially assigned to a medical unit in Columbia, SC. During 1919 he was promoted to Major and assigned as Chief, Medical Services, at Army Hospital #16 in New Haven, CT, which was designated for soldiers suffering from tuberculosis. It was there that he met our mother, Mary Bissell Betts, one of the earliest occupational therapists. They were married in St. Stephen’s Episcopal Church in New York City on November 29, 1919, and settled back in Saranac after a short honeymoon. Dad was 36 and Mother 31 years old – doctors didn’t marry early in those days!

I was born September 25, 1920, and sister Ann came along two years later on September 6th. Sister Mary Betts was born Christmas Day 1925. Dad had bought a large house on Park Avenue, not far from the gates of Trudeau Sanatorium and at the base of Mount Pisgah. The house had the customary cure porch for a patient with TB, with an extra-wide door to one of the second-floor bedrooms, and was designed to be occupied day and night, summer and winter. There was a detached three-story barn to play in and many trees to climb. Lilac bushes, both white and lavender, grew in front of the house and around the open porch. Poplar trees lined the driveway. There were many birches, locust trees, a large pine, a sugar maple, an apple tree, and a grove of aspen in the rear. Mother planted a formal garden on one side; it went to seed after her death on September 4, 1926, of acute leukemia. . . .

Dad soon hired a housekeeper from Canada, who looked after us well for the next four years. Dad’s oldest sister Charlotte, 11½ years older than he, replaced her in 1930. There were good reasons for the change. . . . Aunt Charlotte and Grandmother Packard went to Pleasantville, NY, for a period in 1927 or 1928 to look after Uncle Marshall Howe and his two children while Aunt Edith was dying at Trudeau of tuberculosis. I remember her standing in a window in Ludington Infirmary while we children waved at her. After her death Uncle Marshall, who was Director of the Bronx Botanical Gardens, had 5,000 iris bulbs planted around the Trudeau grounds – a lovely, recurring memorial! When Grandmother died in 1930, Aunt Charlotte found herself alone in Stratford.

The other reason for the change was the Great Depression. Dad’s income had dropped from $20,000+ in 1929, a goodly sum in those days, to $2,000+ in 1930. Like other well-to-do families, we had a live-in maid and a furnace man in winter. Dad couldn’t do without them, but he could save the housekeeper’s salary and provide a roof for his sister. I have often wondered how Aunt Charlotte must have felt about being responsible for three children, ages 10, 8, and almost 5, when she was a 58-year-old spinster! She was a remarkable lady with a quick wit, who soon endeared herself to all of us. She soon was playing an active role in church and community affairs.

I used to ride my bike up Park Avenue, through the Trudeau gates, and past ”Little Red”, the tiny one-room original cure cottage built by Dr. Trudeau in 1884, on my way to the occupational therapy building run by Frances Pearce. When I was old enough, she would help me craft simple silver bracelets for the current girl friend. Across the road there was a horse trough full of water. One Fourth of July Bob McCrum and I found that dropping one “cherry bomb”, a remarkably powerful firecracker, into the trough would expel most of the water in a most satisfying and noisy geyser. As we returned home that day we noted a robin fly into the lilac bush by the driveway. We said, “Let’s surprise that little fellow” and tossed a cherry bomb into the bush. The explosion blew the robin out one side of the bush and poor Aunt Charlotte out of the other, her pince-nez awry and her hair flying in all directions! She forgave us, but it must have been hard for her.

Dr. John Packard's sister, Ann Packard, of 142 Park Avenue is pictured in the 1938 Canaras as a graduating senior at Saranac Lake High School, and in a photo by Dick Ray.