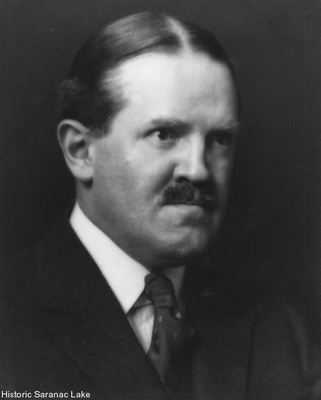 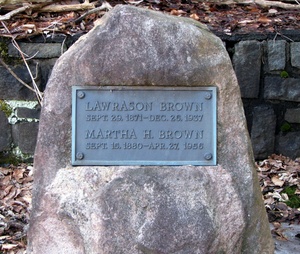 A brick at the Saranac Laboratory has been dedicated in the name of Lawrason Brown by Historic Saranac Lake. Believing it important that patients taking the rest cure keep their minds occupied, Brown encouraged them to study ornithology, botany, and various crafts; to further the latter aim, in 1905 he established an open-air workshop at the sanitarium where crafts and bookbinding were taught. 1 He also started the Journal of the Outdoor Life, which was later taken over by the National Tuberculosis Association, of which he was one of the organizers. He founded the American Sanatorium Association, and served on many boards, including those of the State Hospital at Ray Brook, the Trudeau Sanatorium, as well as sanitoria in Philadelphia and Kentucky, and of the Phipps Institute for the Study, Treatment and Prevention of Tuberculosis . He helped to inaugurate the Trudeau School of Tuberculosis in 1916. 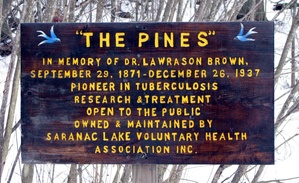 Dr. Brown died December 26, 1937. He is buried in the Pine Ridge Cemetery. Dr. Brown's valet/butler, Peter Green is buried in the family plot. The pine-covered esker known as The Pines, across Pine Street from the cemetery, is held by the Saranac Lake Voluntary Health Association as a memorial to Dr. Lawrason Brown.

Lawrason Brown was a recipient of the Trudeau Medal, the highest award of the National Tuberculosis Association.

In connection with the proposed Narcotic Education week in February, Dr. Lawrason Brown of this village points out recent remarkable statements of the increasing number of heroin addicts as made in a letter on the subject by Congressman Walter F. Lineberger of California.

Commenting on the letter Dr. Brown said, "Personally I have been opposed, on account of patients, to limiting the sale of heroin. Nothing is so effective for treatment of cough, but we can, of course, get along without it." 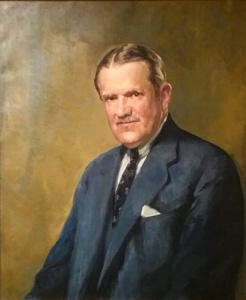 Dr. Lawrason Brown -
Portrait at Trudeau Institute, Inc.Congressman Walter's letter had the following to say in regard to heroin addiction:

"Hon. Frederick A. Wallis, Commissioner of Correction, New York City, declares: "The greatest menace to the nation is drug addiction*****[sic] Nearly 60 percent of the inmates convicted of offenses involving moral turpitude, in all our city penal and correctional institutions are users or peddlers of drugs. The criminal Identificatlon Bureau of his department states that there are thousands of heroin addicts, chiefly youths in their late teens and early twenties, all actual or potential criminals who serve also as recruiting agents for the army of the 'Living Dead'. Heroin changes a misdemeanant over-night into a desparado of the most vicious type. Every day murder, hold-ups and robberies are committed by drug crazed individuals***** The increase in narcotics has been accompanied by an increase in crime."

"Ten ounces of alcohol will kill one man; ten ounces of heroin will kill 3,000 men. Ten ounces of alcohol distributed over a week can scarcely cause the beginnings of drunkenness in even youth; ten ounces of heroin in even 1 youth; ten ounces of heroin applied over a week can produce incurable addiction in thousands of youths. The profits that urge on the traffic are hundreds of percent for alcohol, but are thousands of percent for narcotic drugs. Drug addiction is secretive. Even well informed people never heard of heroin. Detected offenses against the Federal Narcotic Laws were about 1,000 in 1917, in 1925 they were 10,138. The people must know about this newest and deadliest enemy that lies in wait for the youth of the land, 'hooking' them by the tens of thousands because of their ignorance."

1. From a memorial tribute to Lawrason Brown by D.R.L., published in The American Review of Tuberculosis, March 1938.