Dr. Lawrence J. Early was an internist who came to Saranac Lake in 1956. The family first resided at what was once 1 Johnson Road on Moody Pond (now Labrador Lane). In 1966 the family moved to 26 Baker Street. He was a great enthusiast of the outdoors who enjoyed snowshoeing and fishing; he could often be found at the Olympic Ski Jumps in Lake Placid or at the Mt. Van Hoevenberg Bobsled Run, where he acted as the attending physician for many years. 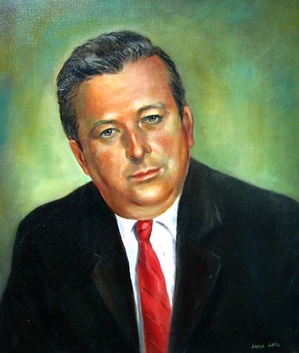 The board of directors of the General Hospital of Saranac Lake has announced the appointment of Dr. Lawrence J. Early to the medical staff.

Dr. Early is a native of Albany. Since graduating from Albany Medical College in 1948, he has interned at St. Paul's Hospital in Vancouver, B. C. and done post-graduate work in internal medicine at Norwalk, Conn. General Hospital.

As a specialist in internal medicine, Dr. Early has been associated with the University of Louisville in Kentucky and the Albany Veterans Hospital.

After serving as a captain in the Army Medical Corps with the 15th Field Hospital in Germany, Dr. Early was again with the Albany Veterans Hospital and was instructor in medicine at Albany Medical College

In 1956, Dr. Early went to the Sunmount Veterans Hospital where he practiced until it closed in 1965. He also took up residence in Saranac Lake at that time [1956].

He is married to the former Ruth Ineson of Bennington, Vt. and has four children, Steven, 15, Patricia, 9, Jeannie, 8, and Christopher, 6, all of whom attend Saranac Lake Central Schools. They make their home at 26 Baker Street.

The announcement from the hospital said the staff is looking forward with pleasure to its association with Dr. Early who will be practicing in conjunction with Dr. Anthony B. Gedroiz.

A native of Albany where he was born April 5, 1924, a son of Lawrence J. and Julia (Clark) Early, he was graduated from Christian Brothers Academy in Hudson, N.Y. and from St. Michael's College in Winooski, Vt. in 1944, and from the Albany Medical School in 1948.

Dr. Early served his medical internship in Vancouver, British Columbia. As a captain in the U.S. Army he served as a physician in Germany from 1948 to 1950.

He came to this area in 1956 and worked at Sunmount VA Hospital here until it closed in 1965, at which time he joined Dr. Anthony Gedroiz in private practice in Saranac Lake.

For the past 15 years he was employed by the state as a physician at Sunmount Developmental Center here. During his many years in the Tri-Lakes area he had served on the staff of the Saranac Lake, Lake Placid and Tupper Lake hospitals and was also medical director at Will Rogers Hospital for several years.

In 1977, he joined other local planners as a key member of the 13th Winter Olympic Planning Committee and was appointed to the position of director of the Olympic Medical Facility at Ray Brook.

In this capacity, he worked on the planning, construction and operation of the medical facilities prior to and throughout the 13th Winter Olympic Games. He was a member of the Board of Directors of the Voluntary Health Association in Saranac Lake for the past 20 years and has been an active member of the International Association of Turtles for over 25 years.

A Memorial Mass will be held at St. John's Church in the Wilderness in Lake Clear at 5 p.m. on Friday, Feb. 1, with the Rev. Robert Lamitie officiating. There will be no calling hours. Dr. Early had requested that donations be made to High Peaks Hospice in care of the Fortune Funeral Home, which is in charge of arrangements.