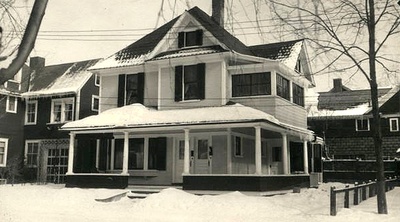 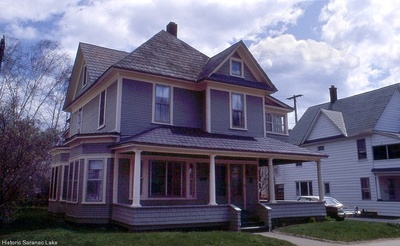 Address: torn down to make way for an enlarged parking lot for the Hotel Saranac

Other information: A Queen Anne-style, 2 1/2 story, rooming-type cure cottage: it provided neither board nor nursing.

The property was bought for $3500 by Milo B. Miller in November, 1902, from the builder, Frank A. Hatch, Jr., who had lived there with his wife and daughter. On December 12, 1907, he sold it to Mary L. Ledger, who began taking lodgers after her husband's death eighteen months later. In 1921, she registered the house with the T. B. Society.

Academy Street had the reputation of having no residents with active tuberculosis.

One of Mrs. Ledger's tenants was Mary C. Mullen, the nurse who did inspection of cottages in the 1920s for the TB Society. She inherited the house from Mrs. Ledger, whose only surviving heir, Ruth, was a nun. Miss Mullin married Ernest Wood, a health seeker who eventually became president of the T. B. Society.

In the early 1930s, Charles Swasey Barnet rented the ground floor where he lived and kept his office. He was another health seeker who came to Saranac Lake and stayed the rest of his life. He published the Trotty Veck Messenger, inspirational pamphlets distributed nation-wide.