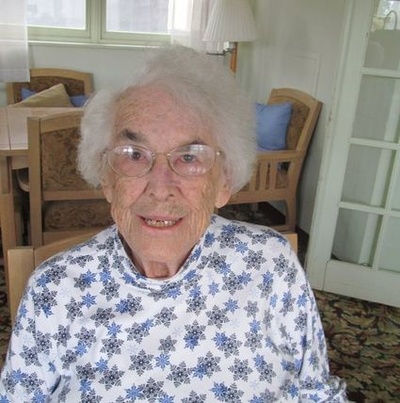 Lenore Leavitt nee Newell was born in Saranac Lake General Hospital on May 5th 1920, and grew up in Keeses Mills, New York. Her father’s family, the Newells, were one of the founding families of Keese Mill. Her father was a carpenter who worked for Ben Muncil.

Lenore’s paternal grandmother was Katie Redwood, whose family had been in the Paul Smiths area even longer than the Newells. Her grandmother lived with them and believed that Lenore should not be taught how to do domestic work-cleaning and cooking, and instead to “be a lady”.

When asked about the effect of the Depression, Lenore said it didn’t change their way of life much, not that they had money, but they never wanted for food because they grew their own. Lenore had four younger brothers, a set of twins: Loren and Lovell, then Richard, and Donald. She used to play baseball with them in nearby fields. The entire family was quarantined when Lenore was in the third grade, because Lovell had scarlet fever. During that time Lenore’s grandmother home schooled her, pushing her through the third and fourth grades in a month.

The Saint Regis Presbyterian Church that the Newells attended had a very active minister at the time, who arranged activities for the children, which Lenore remembers as being fun. “It was a great place to grow up,” she said. Lenore described herself as being very shy in high school. She didn’t become involved in clubs, partially because she always had to take the school bus back to Keese Mill before the sports teams or clubs met. Occasionally her father would drive her and her younger twin brothers into town to go dancing at the Gabriels Grange. Although she remembers the quiet hours between two and four in the afternoon, and the “No Spitting” rule, she said she never got to know any TB patients, as she rarely came into town.

The family would grocery shop in Saranac Lake most Saturdays, and would occasionally go to the movies. Lenore decided she wanted to teach, and attended Plattsburgh Normal School (which became SUNY Plattsburgh). At the time, there was only one building on campus, and she worked for local families in exchange for room and board. She would be able to go home about every month or so, and would usually make it back to the annual Keese Mill neighborhood Christmas Eve dinner, where oyster stew was always served. Lenore attended the Normal School for three years, and was in the last class that was allowed to teach with only a three-year education, with the condition that they finish their fourth year within ten years of graduating.

In 1940, Lenore began teaching in Bloomingdale, where she began dating William Leavitt, a local boy from Gabriels. Lenore’s twin brothers [Loren C. Newell and H. Lovell Newell] both served in the Air Force in World War II [where they were both killed]. She said the rationing didn’t affect her family very much as they grew much of their own food. During the war, William had a farm deferment and so didn’t serve in the military. Lenore and William were married in 1944 in the Keese Mills Presbyterian Church.

After their wedding, Lenore and William moved into one of the tenant houses on his parents’ farm. She stopped teaching and helped on the farm by driving truck for harvesting potatoes. Lenore and William have three sons, Bob, Art, and Dave. When her oldest two children were four, the family drove across country. She said, “We had a wonderful trip, we camped along the way, cooked our own meals. It was a wonderful experience.” She and William have traveled through every US state, and Canadian province as well as much of Europe.

Lenore lived to celebrate her 100th birthday in May of 2020.

Lenore was a lifelong resident of the area, born in Saranac Lake on May 5, 1920, and growing up in Keeses Mills with her parents, Harold and Pauline (Campbell) Newell and four younger brothers. Lenore married William Leavitt on Saturday, June 26, 1943, at the Keeses Mills Presbyterian Church. Upon marrying Bill she moved to the Leavitt Farm in Gabriels, where she lived until moving to Saranac Village at Will Rogers in 2015.

In 1943, she joined the First United Methodist Church in Saranac Lake where she was an active member until her death. On May 5, 2020, the wonderful staff and leadership at Will Rogers helped her celebrate her 100th birthday, a goal and highlight of her life.

During 1928, Lenore was quarantined with her family while her brother convalesced with scarlet fever. During this time her grandmother tutored her, and on returning to the Keeses Mills elementary school she was advanced two grade levels. At the end of her senior year of high school she was deemed too young for graduation and spent a fifth year in high school before attending and graduating from Plattsburgh Normal School in 1940. She then began teaching elementary school, first in Lake Clear, then Bloomingdale. Lenore continued substitute teaching through her 70’s and always encouraged the younger educators in her family.

Lenore supported the Leavitt Family Farm in many roles from bookkeeper to working side by side with her husband Bill, driving trucks for harvest, cutting seed for planting, or grading potatoes for shipping.

Lenore was known for her specialty cookies, “chocolate burrs”. Her grandchildren would eagerly await to receive a package of chocolate burrs in the mail when they moved to college. You could always count on chocolate burrs being shared at any family event, or when anyone needed to celebrate an accomplishment.

Lenore and Bill loved to travel. From 1978 – 2015 she enjoyed spending her winters in Winter Haven, Florida. Together they traveled in all 50 states, all 10 provinces and 3 territories of Canada and to Europe twice. On one trip Lenore was able to lay a memorial on the grave of her brother, Harold Lovel Newell, in the Ardennes American Cemetery in Neupre, Belgium.

After Bill’s death in 1998 Lenore continued to travel, including a visit to the Alamo and several cruises throughout the world. One of her favorite trips was with her dear friend Dot MacNamara in 2006, through Egypt to Libya to witness an eclipse. It was on this trip that, always up for another adventure, Lenore rode a camel.

Lenore was an accomplished seamstress and knitter. Like her mother, Pauline Newell, Lenore was always making something for someone, from men’s shirts to granddaughters’ ice skating dresses to formal gowns for Eastern Star events. The mittens, hats sweaters, scarves and socks for family, friends, and charity number in the thousands. Her hand knit Christmas Stockings are cherished by family and friends. Lenore was an active member of the Town of Brighton knitting and sewing group known as the Brighton Ladies of the Evening, and continued knitting hats, mittens, and sweaters for “Guidepost Children” through March 2020.

Lenore was initiated in the Order of the Eastern Star on September 22, 1950, and went on to serve in all officer positions culminating as the District Deputy Grand Matron of Franklin District. She remained active as a life member of OES until her death.

Lenore is predeceased by her husband William, her parents, and brothers, twins Loren Newell (WWII) and Harold Lovell Newell (WWII).

Memorial donations can be made to the First United Methodist Church of Saranac Lake or the Paul Smiths Gabriels Volunteer Fire Department in care of the Fortune-Keough Funeral Home.

Funeral arrangements are in care of the Fortune-Keough Funeral Home in Saranac Lake. Due to the continued health concerns regarding the COVID-19 pandemic, there will be no funeral services for Lenore Leavitt at this time. A memorial service will be scheduled at a later date.