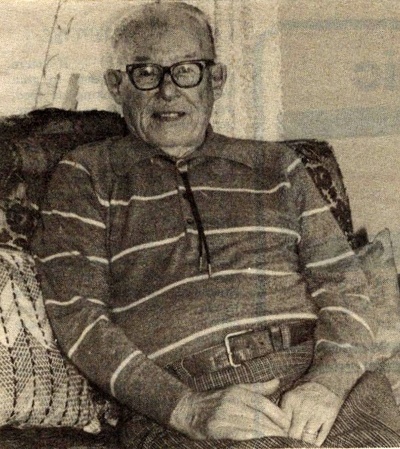 Leo McKillip was a World War I veteran.  Born on Christmas Day and died on Independence Day

Leo McKillip is a small, agile man with iron grey hair who lives with his wife, Eva, in a bright yellow house at 8 Pontiac Street.

When asked about the war he said, "Oh geez, it was no picnic," and went on from there as follows:

"I left Saranac Lake with a contingent of 150 men. I weighed all of 113 pounds. It took them four weeks to find a uniform to fit me. When I got it, by geez, I felt pretty proud of it. 'We got dysentery, colds, then the Spanish Influenza hit. Every day we'd go down and find five or six men dead.

"I got into a fine outfit, a machine-gun battalion, a 50-caliber gun, a Hotchkiss. We stayed 300 to 400 yards back of the front line and we'd keep the air planes from coming and blowing up the cavalry. The guns got awful hot; we'd wear those big gloves. I stood by the recoil, that's what drove me nuts. My ears used to ring.

"We had a battalion of 1,200 men and we were probably scattered from about here to the town hall with a machine gun here, a machine gun there. A couple times the kitchen was blown to hell and all we had was hard tack. You could only eat about a teaspoon a day, or a hunk about the size of a duck egg You'd chew on it, bite on it. After a while, you wouldn't be hungry."

He went to the closet and reached a photo album down from the top shelf. Inside were photographs of him and his outfit dug in with their long machine guns in the French countryside. In one photograph Leo's face was circled in blue ink. Another showed the outfit with a slender white dog.

"We had a mascot," Leo said, "a little dog that stayed with us all the time and," he paused and tapped the photograph with his finger and smiled, "we smuggled him back to the United States."

He had been a printer for 53 years, owning and operating the Commercial Printing Press for 33 years.

A World War I veteran, he served in Company A Anti-Aircraft, Machine Gun Battalion of the 3rd Army, in France. In 1988 he received special recognition from the French government for his service during World War I.

Calling hours were held Sunday at the Fortune-Keough Funeral Home, and a Mass of Christian burial was scheduled for this morning at St Bernard's Church, the Rev. Thomas Kornmeyer officiating. Burial will be in St. Bernard's Cemetery.

Memorial donations may be made to the Carmelite Monastery or to a youth program for the improvement of a playing field, in care of the funeral home.