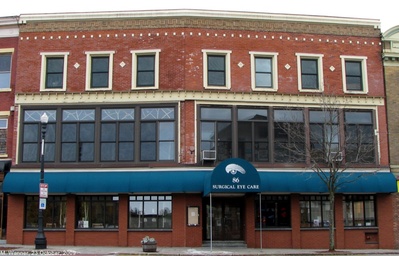 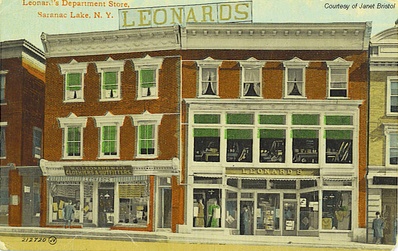 Adirondack Record-Elizabethtown Post, August 8, 1929
William C. Leonard was a peddler whose route took him, with his horse and wagon, from his home in Bangor, New York (west of Malone) as far south as Saranac Lake. He must have done quite a volume of business in the community of health seekers because in June, 1895, William's father, Marcellus, invested $1500 in the purchase from F. A. Isham of the lot at 85 Main Street. 1

Here, W. C. Leonard built his first department store building sometime between 1897 and 1900. So successful did his venture become that, in June, 1905, he bought the lot, at 83 Main St., between his store and the Coulter Block. That lot belonged by then to Annie P. O'Brien who had bought it from F. A. Isham in 1897. There was another small strip of hers that Leonard wanted as well as pieces and rights-of-way, etc. involving Coulter and [Emma T. Harding, wife of John] Harding, and, finally, the establishment of Coulter's northeast wall as a wall in common. Leonard moved fast. By the time all the documents were drawn up, his second department store building was under construction. Leonard's was Saranac Lake's only, true, full size department store. It offered a wide variety of sound merchandise at reasonable prices. Especially in the realm of clothing, for those who couldn't afford stores like Carey's or Finnigan's, this was a pleasure indeed.

To the endless fascination of children, the store's four floors of departments were linked to a central cashier by a pneumatic tube delivery system.

With quality goods that folks could afford and a gismo that made mom's money disappear with a whoosh, Leonard's became a beloved landmark and, facing directly onto Berkeley Square, both literally and figuratively Saranac Lake's mercantile heart.

The store remained in the Leonard family until Mildred Leonard Baker sold it to Mark David Associates, Inc. in September, 1965. However, it had been leased to other companies since the mid-1940s.

In October, 1973, Irving S. Caplan obtained the property. Caplan is owner of the National Army Stores Corporation chain, one retail branch of which currently occupies the Leonard's buildings.

There was a time when the two buildings constituting Leonard's Department Store were a pleasure to behold. Then, probably in the 1920s, the red brick walls were covered with stucco. Much later, the nine, tall, second story display windows were covered with plywood. The original storefront was rearranged and covered with hideous dark blue, small, square tiles (like some nightmarish bathroom wall). Above that was emplaced a fat band of darker blue enameled metal panels upon which were mounted obese, red plastic letters (spelling NATIONAL ARMY STORES) floating on white plexiglass fields. Finally, everything above this was painted a sickly, mustard yellow.

In 1982, the owners of the buildings undertook and completed the expensive and gratifying operation of restoring the second and third story facade to its original (as nearly as possible) condition. Contractor Richard Lyon and his men ran into a number of complications, and the project was made considerably more lengthy (and costly) by the need to replace several courses of decaying brickwork near the top of the third story.

Now, the transomed upper display windows are in use again, and all the details that had been so long obscured are now visible. Not least of these is a band of blond brick fretwork just below the final cornice. And the the blue tiles have at long last been removed from the storefront.

In terms of the integrity of the Berkeley Square Historic District, the events at the Leonard's Buildings have been like a hallucination turning into a sweet dream. Looking east from the corner of River Street and St. Bernard street, a spot that may have once been known as Riverside Square, this photo includes a shadow portrait of the photographer, believed to be George W. Baldwin, in the afternoon light. The white building on the left houses Leonard & Co., clothing purveyors in its original location, before the move to Main Street above Berkeley Square. Right foreground is a shed, and beyond it is the store of Henry West, Boots & Shoes. The location is confirmed by the 1895 Sanborn map, but the photo could have been taken as early as 1885, when the businesses were advertised in the Enterprise at these locations. The "carbonated beverage" wagon heading up St. Bernard Street is the conveyance of I. Merkel and Sons, a Plattsburgh bottling outfit that had apparently bought the Adirondack Bottling Works by 1896. Barbara Parnass made the print for the library from Baldwin's glass plate negative. Adirondack Daily Enterprise, October 6, 2012

The firm of M. A. LEONARD & Co., of Lake Placid, has been dissolved by mutual consent. F. S. LEONARD & Co. will carry on the dry goods trade, and F.B B. GUILD, who has purchased the stock of clothing, shoes, men's furnishings, etc., will continue that branch of the firm's business.

For the first time in its history the firm of W. C. Leonard & Co. has invited the charitable organizations of this vicinity to share in the profits of its business. Five per cent of the day's total sales will be given to the following institutions which have accepted Leonard & Co.'s invitation.

On Wednesday, the Industrial Settlement

On Friday, Lend a Hand Circle.

Representatives of the several organizations will have charge of the store on the days indicated and it is anticipated that every effort will be exerted to induce liberal buying.

1. However, a photograph from the 1890s of River Street near St. Bernard Street shows a "Leonard & Co. Dry Goods" sign on a building at what became 12 River Street.