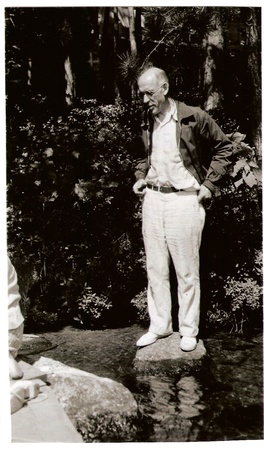 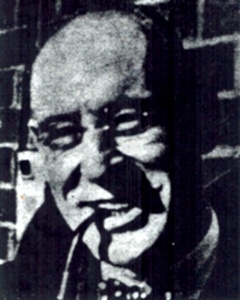 From the Obituary of Dr. Leroy Upson Gardner, provided by a family member in 2012. Source unknown. Born: December 9, 1888, Meriden, Connecticut 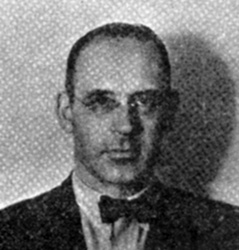 Saranac Lake and the Olympics.  1932, Currier PressDr. Leroy Upson Gardner was the director of the Saranac Laboratory from 1927-1946, and a researcher who did pioneering work on pneumoniconiosis and silicosis. He started at the Trudeau Foundation in 1919 as a pathologist, and became director of the Lab in 1927. During 32 years of research he found means of curbing silicosis in mines and factories, and showed how silicosis related to tuberculosis, work for which he received the Trudeau Medal in 1935. Gardner received an A.B. from Yale University in 1912, and an M.D. in 1914. He was an instructor in pathology at Harvard University in 1916-1917. He served as Director of the National Tuberculosis Association.

A brick at the Saranac Laboratory has been dedicated in the name of Leroy Upson Gardner by his grandson, Thomas Downs. In 1995, Dr. Gerrit W. H. Schepers published an article in the American Journal of Industrial Medicine, Chronology of Asbestos Cancer Discoveries: Experimental Studies of the Saranac Laboratory. The article details Dr. Gardner's research into the effects of asbestos on the lung.

Dr. Gardner lived in Saranac Lake from 1917-1946. His residence was 36 Old Military Road. He died of a heart attack.He is buried in the cemetery at St. John's in the Wilderness Episcopal Church.

Alice Wareham recalled calling Dr. Gardner "Uncle Roy" and his wife, "Aunt Carabel." There was a wildflower contest in the spring run for the Baldwin School children. Mrs. Leonard was surprised when Alice found what she thought was a yellow trillium, and didn't believe her. Instead of saying, "you're wrong", Dr. Gardner said, "show it to me." She did, and he confirmed that it was a rare mutation of a yellow trillium.

Lillian Blinn was his long-time secretary.

SARANAC LAKE, N.Y., Oct. 24—Dr. Leroy Upson Gardner, director of the Saranac Laboratory and the Trudeau Foundation, an international leader in the research of silicosis and other industrial diseases, died here this morning in his home. His age was 57.

At his death Dr. Gardner was in the midst of a program for the expansion of the laboratory and the development of a $1,000,000 medical center in Saranac Lake. He had raised more than $100,000 for an addition to the laboratory and was planning for the development of the medical center. As a director of the Trudeau Foundation, he was also interested in the expansion program planned for Trudeau Sanatorium that will call for an expenditure of more than $1,000,000.

Dr. Gardner received in 1940 the William S. Knudson Award for his research on the control of silicosis, which was credited with determining what takes place in a workman’s lung as a result of breathing silicon dust and with making possible the prescription of preventive measures for improving(?) the plants. In 1935 he received the Trudeau Medal for important work in the pathology of tuberculosis and the relation between tuberculosis and silicosis.

As director of the Saranac Lake laboratory, Dr. Gardner used the facilities in seeking answers to questions he posed as a medical student: “Why are some stone cutters in the Barre, Vt. granite quarries highly susceptible to tuberculosis? And why, in the near-by Proctor, Vt. marble quarries, are the cutters not similarly affected?"

He began his investigations in 1914. Twenty-six years later his research had made him an international authority on the subject. Silicosis research took Dr. Gardner to industrial plants and mines throughout the nation.

Born in New Brittain, Conn., to Irving Isaac and Inez Baldwin Upson Gardner, he received his B.A. degree in 1912 and an M.D. degree in 1914 from Yale, and took post graduate work at Boston City Hospital and Harvard Medical School from 1914 to 1917.

Taught at Harvard and Yale

During the First World War, Dr. Gardner served as a lieutenant in the Army Medical Corps in 1917. He was instructor in pathology at Harvard Medical School in 1915-17, and assistant professor of pathology, Yale School of Medicine, 1917-18.

In 1940 he received an honorary M.S. degree from Yale. He was author, with S.A.—- (?) [possibly S. A. Petroff] “Tuberculosis—Bacteriology, Pathology and Laboratory Diagnosis," and contributed to medical publications on silicosis and related diseases due to (illegible).

They're the staff of the Saranac Laboratory. Desiring to take their place in the world despite the handicap of tuberculosis, they have become research workers, whose honest and often spectacular attainments are internationally known.

They are quietly at work on the research problem of tuberculosis and of silicosis and other dust diseases. They are quietly proving, also, though they're unaware of it, that Saranac Lake is an A-No. 1 spot for rehabilitation of the patient.

They've all had tuberculosis. They're united in their interest in its care and cure. Not doctors of medicine, they all see in laboratory work a way of further defeating a disease which each day, through their efforts, grows less formidable.

They're largely self-taught, though as one learns his profession, he gives his help to the next.

Their director is Dr. Leroy U. Gardner, world authority on silicosis. Dr. Gardner came to Saranac Lake because he had tuberculosis. He had been an assistant professor of pathology at Yale.

He loaned his knowledge and experience and interest to a new job here. That’s what all the men and women under him are doing, too.

He disclaims it, but he must be a great boss. In connection with every one of the staff he says, “I don’t know how I could manage without him. He does such-and-such ever so much better than I could.”

From an unknown source (probably Canadian) provided by a family member in 2012:

It is with deep regret that we record the death of Leroy Upson Gardner at Saranac Lake on October 24, 1946, at the comparatively early age of 57. He was born in New Britain, Connecticut, and began his medical career at Yale, where he took his B.A. in 1912 and his M.D. in 1914. He then went to Boston and worked in the Havard Medical School at the Boston City Hospital, and during 1916-17 he was instructor in pathology. He joined the U.S. Army Medical Corps in 1917 as a lieutenant, but in 1918 he became assistant professor of pathology at Yale. Then in 1919 he was appointed pathologist to the Trudeau Foundation at Saranac Lake, and subsequently and successively director of the Saranac Laboratory in 1927 and director of the foundation and Trudeau School in 1938. He was a member of the corresponding committee on silicosis of the International Labour Office at Geneva, a Fellow of the American Association for Advancement of Science, a member of the American Association of Pathologists, a director of the National Tuberculosis Association, and a member of the Council on Industrial Health of the American Medical Association. He received the Trudeau Medal in 1935 for his work on the pathology of tuberculosis and the relationship between tuberculosis and silicosis. In 1940 he received an honorary M.S. degree from Yale, and in the same year won the William S. Knudsen Award for his research on the control of silicosis.

To the many Englishmen who have visited Saranac Lake, he will always be remembered for his great hospitality, courtesy, and kindness. The picture which we reproduce is characteristic of him with his pipe and was taken shortly before his death. He is most famous for his work on silicosis, which started when he was a medical student. He sought an answer to the question : 'Why are some stone cutters in the Barre, Vermont granite quarries highly susceptible to tuberculosis; while in the nearby Proctor, Vermont marble quarries the cutters are not similarly affected ?' He began his investigations in 1922, and in the next year published (Amer. Rev. Tuberc., 1923, 7, 344) the results of his classic experiment with the finely divided powder of carborundum (silicon carbide), which failed to produce silicosis despite the sharp-edged nature of its particles. He soon became an international authority on the subject. He reported unequivocally that the inhalation of metallic aluminium and hydrated aluminium oxide—XH 1010—protects animals against the development of silicosis (J. industr. Hyg., 1944, 26, 211). This finding necessitates a therapeutic trial in man.

At the time of his death, Dr. Gardner was engaged on an expansion scheme for his laboratory and the development of a million dollar medical centre at Saranac Lake; he had already raised more than a hundred thousand dollars for the project. He was also interested in the expansion programme planned for the Trudeau Sanatorium. He will be sadly missed in the fields both of silicosis and tuberculosis.

Gardner Documents in possession of grandson, John Neely include: 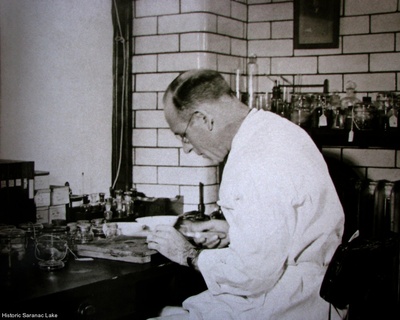 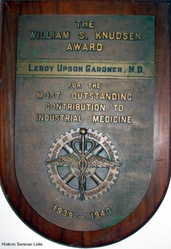 There is a photograph of Dr. Leroy Gardner at the Saranac Laboratory here.