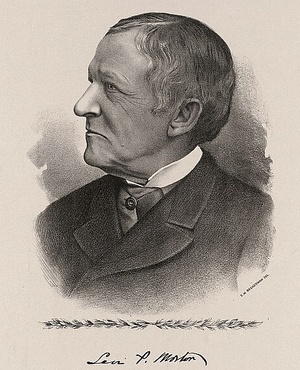 Children: One child by his first wife; five daughters by his second wife

In 1903 Morton had Camp Eagle Island built as a summer retreat in Upper Saranac Lake; it was designed by noted architect William L. Coulter and built by contractors Trombley and Carrier. Morton had previously owned Pine Brook on the nearby mainland.

Morton was popular in France, where his efforts improved commercial relations between the two countries. In October 24, 1881, in Paris, he placed the first rivet in the construction of the Statue of Liberty.