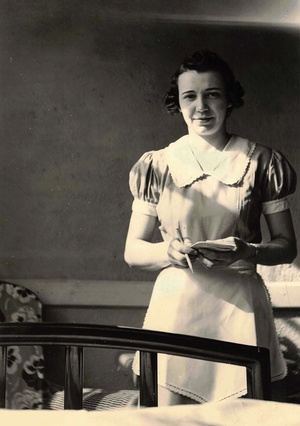 Lillian Wright Bibro worked as a nurse and "hotel manager" at the Santanoni Apartments for 21 years. She left in 1953, when William Scopes was selling the business. She married Harry Bibro, who had been at the Apartments, and moved to Plattsburgh. She then worked at Harry's Toy Store in Plattsburgh until she retired in 1974.

She was born in Ellenburg Depot, the daughter of Roy and Isabell (Lockerby) Wright.

Lillian married Harry Bibro in 1953 in Plattsburgh. Harry predeceased her in 1981.

Lillian worked for 21 years at Santanoni Hotel in Saranac Lake as a hotel manager. She then moved to Plattsburgh in 1953 and worked at Bennett's Toy Store for 21 years, until retiring in 1974. She then cared for her great-niece and nephew, Rob and Sarah Shimko, for many years.

She enjoyed playing golf and was an avid bridge player.

There will be no public calling hours or funeral services. Burial will be at a later date in the Arlington National Cemetery with her late husband, Harry.

Memorial donations may be made to the Plattsburgh Methodist Church.The R.W. Walker

Home, Inc., 69 Court St., Plattsburgh, is in charge of arrangements.