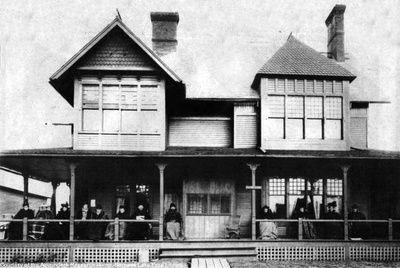 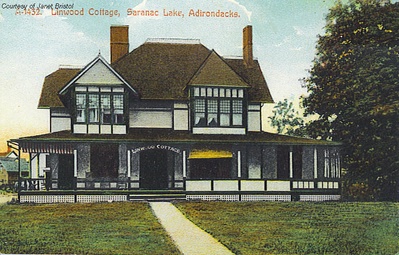 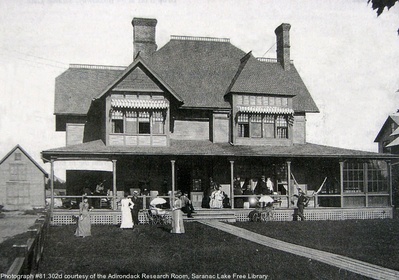 Croquet played on the front lawn of Linwood Cottage (undated) 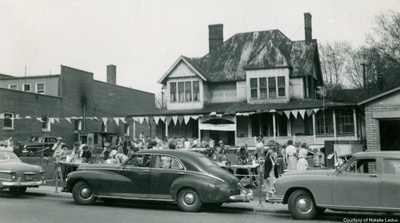 The Linwood Cottage stood in the middle of a large lawn, well back from Main Street. It was built for Arvilla E. Blood and sold the following year to Susan B. Nelson. It was sold again in 1894, Almina G. Mantz, and in 1899 to Lillian F. Angleman, and in 1901, to Richard and Lillian B. Johnson who operated the cottage for the next 19 years; Richard Johnson ran a livery at the rear of the property; the Johnsons also managed the Johnson Cottage on nearby St. Bernard Street, among others. In 1920 it was bought by Rose Bruzza, who operated it as a rooming and boarding house. Rose Bruzza died in 1950, leaving the property to her daughter Rose B. Urgo, wife of Pascal Urgo who tore it down in 1953 after it fell into disrepair. 1 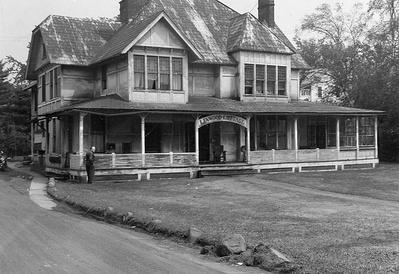 "Workmen will start taking down Linwood Cottage, Main St., landmark for 73 years, around July 15," Pascal Urgo said yesterday. The building has belonged to the Urgo family since 1920 and Mrs. Urgo's mother, Mrs. Rose Bruzza, lived there for thirty years until her death at the age of 89.

Mr. Urgo said that it was his understanding that only one child was born in the house—his son, Pascal Linwood Urgo, Jr., who was killed in action in Pacific fighting during World War II.

The "cottage" has ten rooms upstairs and eight or nine downstairs, Mr. Urgo said, and stands on a lot 400 feet deep and 103 feet wide. There are three other buildings and a garage on the lot. "The small house on St. Bernard street at the rear of the lot will also be taken down," he said.

There has been some speculation that one of the big chain stores has been interested in the property Mr. Urgo said that none of them had talked any business recently.

According to Dorothy Stephen, she and her husband Joe lived in one of the houses on the rear of the lot when they were first married.